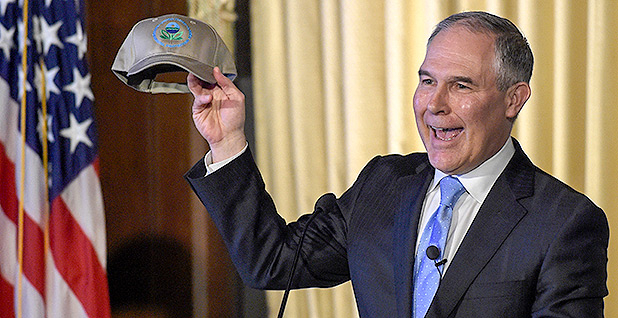 By late yesterday evening, advocates with the Wisconsin-based Center for Media and Democracy were combing through the email correspondence between Pruitt and his top staff in the Oklahoma attorney general’s office and coal, oil and natural gas companies. The group intends to publish the emails online by 9:30 am today.

In an emailed statement, a spokesman for the Oklahoma attorney general’s office said the office had gone "above and beyond" the requirements of Oklahoma’s open records law.

"This broad disclosure should provide affirmation that, despite politically motivated allegations, the Office of Attorney General remains fully committed to the letter and spirit of the Open Records Act," spokesman Lincoln Ferguson said.

The Center for Media and Democracy had pursued the documents for two years. Last week, Oklahoma County District Judge Aletia Haynes Timmons ruled that Pruitt had failed to follow the state’s open records laws, and required him to produce emails relating to one of the outstanding requests by close of business yesterday.

Senate Democrats and environmental groups had demanded the emails’ release prior to Pruitt’s confirmation last week but failed to convince Republicans. Yet any hint of an email scandal was absent from Pruitt’s first public address yesterday to employees at EPA headquarters in Washington, D.C.

Holding up an EPA cap, Pruitt told employees he wants to help them do their work and argued for "civility" in a "toxic" political environment.

"I seek to be a good listener," Pruitt said, commending career staffers for their dedication and contending that media reports about him might not paint a fair picture.

But Pruitt’s tone pivoted sharply from EPA’s core message in recent years. Where former EPA chief Gina McCarthy focused most of her speeches on the agency’s work to improve public health, Pruitt instead highlighted the importance of abiding by congressional intent and providing regulatory certainty to businesses.

"Regulations ought to make things regular," Pruitt said. "Regulators exist to give certainty to those that they regulate. Those that we regulate ought to know what’s expected of them so they can plan and allocate resources to comply."

Pruitt said EPA should avoid "abuses that occur sometimes" in the regulatory process. He called out the agency practices of regulating through guidance rather than an official rulemaking, or writing rules in response to litigation from environmental groups.

"We need to be open and transparent and objective in how we do rulemaking and make sure we follow the letter of the law as we do so," he said.

Pruitt plans to work to roll back many of the Obama administration’s signature environmental achievements, including a rule to reduce greenhouse gas emissions from power plants. An executive order on that rule, called the Clean Power Plan, could come as early as this week, although more binding efforts to undo it will take longer and face lawsuits (Climatewire, Feb. 21).

The new administrator wants to narrow the scope of EPA’s work, and employees have voiced concerns about staffing and budget cuts and reorganizations that might prevent them from fulfilling their obligation to protect the environment.

EPA staffers filing out of their Washington headquarters yesterday said they were still concerned but would wait to see how their new boss worked.

One EPA employee said he would "give him a chance."

That employee added that he thought Pruitt’s speech was "kind of vanilla." He said that while it makes sense that Pruitt would emphasize a need to adhere to the law, he added, "Let’s hope we stick to that."

Another employee said he saw the potential for a positive working relationship with the new administrator.

"He thinks that you can still save the environment yet have economic growth, which sounds good. I think he’s a personable guy; I kind of like him. I look forward to working with him," said one EPA employee in the Office of Water.

"I think this is the first step of his effort to reach out and make sure people understand who he is and know he’s open to addressing their concerns," Holmstead said, adding Pruitt "didn’t pull any punches" or make promises that he couldn’t keep about EPA’s budget, which the president and Congress will ultimately decide. Many agency staffers will be waiting to see the budget, Holmstead said.

Bill Becker, executive director of the National Association of Clean Air Agencies, said Pruitt’s case for ensuring that the agency abides by the law, adheres to process and works closely with states "sounds awfully similar to previous administrations — and I say that really as a compliment."

But a national environmental program for cutting pollution won’t succeed at the state and local level without a strong and effective EPA, he warned. The possibility of significant cuts to EPA’s budget or slashing the agency’s 15,000-person staff to about 5,000 employees, as transition team chief Myron Ebell has suggested, threatens that (Greenwire, Jan. 26).

If Pruitt’s first acts are to rescind regulatory programs on which many states relied without seeking a substitute, Becker said, it might cause a rocky start.

"We welcome delegation of authority, but not without financial and regulatory help, and not without the important backstop of EPA," Becker said.

Environmentalists quickly condemned Pruitt for not focusing his speech more on environmental and public health issues.

"My immediate reaction was that in his first address to EPA, he didn’t talk about environmental protection at all. It was completely absent of any mention of protecting clean water, air and land. No mention of climate change, which is obviously a critical challenge of our time," said Nick Conger, press secretary for the Natural Resources Defense Council and former communications adviser to the EPA administrator’s office during the Obama administration.

Conger noted that Pruitt also did not focus on regional engagement and did not take questions from staff members, something his former boss, McCarthy, used to do during each of her all-hands meetings as EPA administrator.

Catherine McCabe, who was acting administrator until Pruitt’s confirmation, touted her new boss’s work to achieve a water rights settlement among the state of Oklahoma, cities and tribal nations.

Pruitt instead spoke about his vision for making regulations simpler for industry.

While he didn’t mention the Clean Power Plan directly, he said he believes the agency can be "both pro-energy and jobs and pro-environment."

"We don’t have to choose between the two," he said.

A senior official at the U.S. Chamber of Commerce’s Institute for 21st Century Energy recently said there would be "hell to pay" if the Trump administration tries to repeal EPA’s 2009 endangerment finding.

"And if you are going to go out there and say, ‘We’re going to pull this back,’ I mean there is going to be hell to pay, not just from those people out there who are protesting those plants," Senior Vice President for Policy Christopher Guith said last month at an event in Kentucky, according to a transcript published by the Energy and Policy Institute, a watchdog organization backing renewables.

"There’s going to be hell to pay from, you know, soccer moms and soccer dads all throughout the country. People who probably voted for Donald Trump," Guith said.

Matt Letourneau, a spokesman for the institute, said Guith’s answer "was based on a political analysis of the situation," not an official policy position.