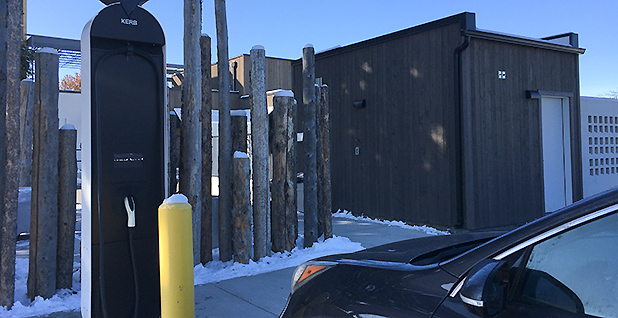 BOZEMAN, Mont. — Sometime soon, bikers around the United States will be sharing the road with a Harley-Davidson LiveWire motorcycle running on electrons, not gasoline. Call it rolling volts, not rolling thunder.

Some of the battery power will be coming from a new line of high-voltage chargers developed by a startup technology developer called Kerbspace, based in Bozeman.

Kerbspace, which founder Bill Clem is funding with income from a consulting business, has seven chargers in service now for cars and e-bikes. He aims to build and ship 100 units in the coming year for Harley and other customers from a factory space in Bozeman and contract manufacturers elsewhere.

Clem says right now, charging electric vehicles is a strange, sometimes weird and occasionally uneasy experience, one that is totally different from what we all do as second nature — fill up our vehicles with gasoline at a service station. That has to change, says Clem.

"The thing that really needs to happen if EVs are going to become ubiquitous, the charging places need to be safe and secure and a place where you’re comfortable," Clem said. "It needs to be second nature."

Gas stations are different from most EV charging sites, he said. "The lights are bright. You have your pump. If you have a problem, there is somebody inside who’s right there. In charging spots, nobody is there to help you."

The Kerbspace chargers are towers topped by a smiley face logo and a powerful light to illuminate the charging area, to banish spooky charging spots in a remote corner of a darkened parking lot. "Our system is really focused on lighting. Not just having a little light but actually lighting up the parking space," Clem said.

Clem’s Kerbspace software permits EV motorists to set up and authorize a charging session on their phones without venturing outside the car to swipe a credit card or punch in access codes. When the transaction is all set, they just plug in and get back in the car.

"The technology is amazing. But what I love about Bill’s attitude and Kerbspace’s attitude is that the product of service is not just about charging the vehicle," said Stacie Wunsch, the company’s director of business development. "It’s about the entire charging experience, both the EV drivers’ and the customers who run hotels or commercial centers with chargers."

While Kerbspace is a startup, Clem is not.

"I always wanted to be an industrial designer when I was a kid," Clem said.

His dad built him a snowmobile from a Popular Science magazine how-to-do-it primer, and in grade school, he was drawing his own designs for snow vehicles. After graduating in design from Montana State University, he was hired to work on real snowmobiles at Polaris Industries, the Minnesota-based manufacturer of motorcycles and off-road vehicles.

Clem has designed a lot of things, including car interiors, fitness equipment and medical devices.

In his Bozeman office, he shows off a square metal frame he designed. It is a device to spread a breastbone apart and hold the heart stable in open heart surgery. The design came from closely observing surgery.

So are his chargers. "I’ve done a lot of observational things. I go in and watch people do things," he said. To understand the charging experience, "I basically sat in parking lots. I tried not to be creepy, but I watched people as they deal with uncomfortable situations. Are they looking around over the shoulder?" He talked to people about how they felt when charging. That shaped his design ideas.

The chargers must be truly functional, like the heart device, he said. His units are made of separate plug-in modules so that new versions can be installed.

Hotels, retailers and municipalities need to see the basic public charging services they provide as a lure to pull EV owners in, a loss leader that can be provided for free, Clem said.

Wunsch said the cost of electricity for an overnight charge is trivial. So why charge for it? She said that hotels used to charge for internet access. "Now it’s an amenity."

Ahead for Kerbspace is the difficult leap from startup developer to commercial-scale company, a period venture capitalists call the "valley of death." The EV charging industry is already moving fast with big players out front, but Clem hardly sounds intimidated.

"We’re looking at various funding scenarios," he said. "Up to this point, it’s been me."