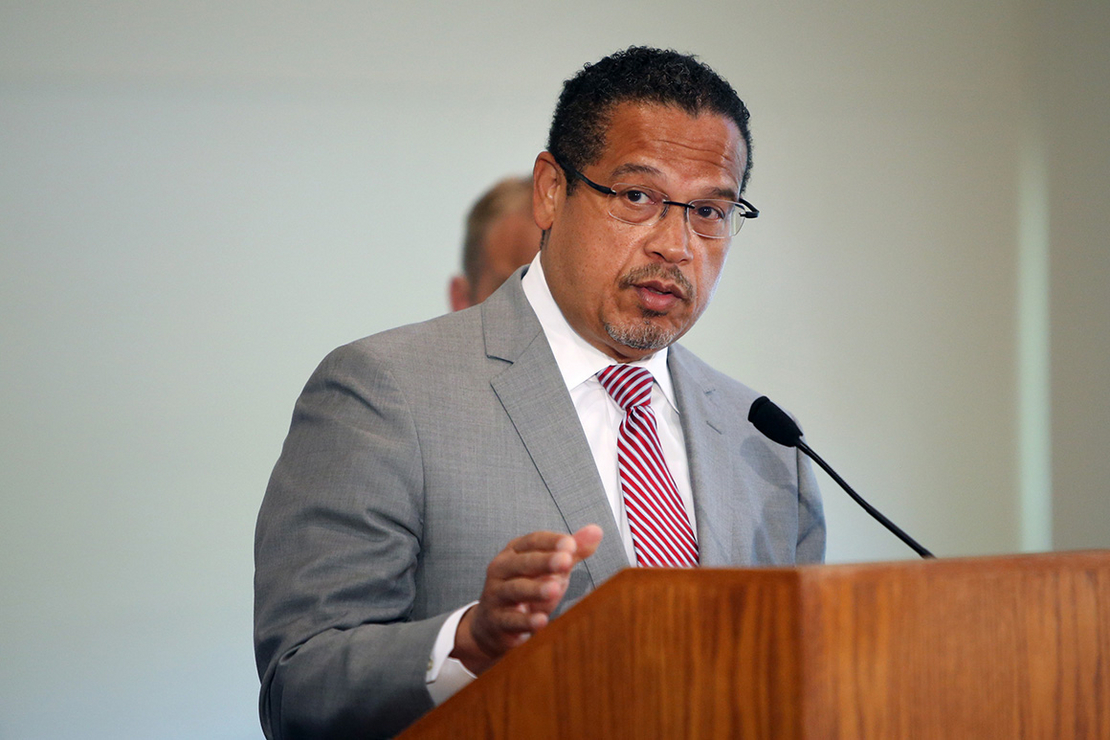 A program that began as a way to boost challenges against the Trump administration’s environmental rollbacks has sparked conservative backlash in state capitols across the country.

Opponents of climate liability litigation that targets the fossil fuel industry have launched an assault against a Bloomberg Philanthropies-sponsored fellowship program that provides “special assistant” staffers to state attorneys general.

Debate over the program — which has provided attorneys to at least 10 states and the District of Columbia — flared last year during the confirmation of a high-ranking Biden administration nominee and has recently surfaced in state political races, including in Republicans’ bids to replace Democratic Minnesota Attorney General Keith Ellison, who is up for reelection this year.

“Imagine a Republican attorney general getting a letter from the [National Rifle Association], asking if they’d like two full-time paid employees. The cries of outrage … would be deafening,” Annette Meeks, founder and CEO of the conservative Freedom Foundation of Minnesota, said at a February hearing in support of GOP-sponsored legislation that would have barred Ellison from hiring outside counsel.

She added: “We do not want elected officials … soliciting billionaires to fund official functions of those offices.”

At issue is a program run by New York University’s State Energy & Environmental Impact Center, which launched in 2017 with a $6 million grant from the charitable foundation led by climate activist and former New York City Mayor Michael Bloomberg. The intent was to give attorneys general added expertise as former President Donald Trump came into office and took aim at a broad swath of federal environmental regulations.

The center conducts research, hosts events and runs the fellowship program that pays the salary of special assistant attorneys general who work on clean energy, climate and environmental matters in selected attorneys general offices for a limited term.

Conservative groups have raised legal questions about the fellowship program since it began. And several states have looked to outlaw the practice: Virginia, for example, in 2019 became the first state to pass a measure requiring attorneys in the attorney general’s office to be state or federal employees paid with public funds.

Minnesota last month became the latest state to try to bar its attorney general from using any lawyers who aren’t employed by the office or other state government agencies. The measure died at the close of the legislative session late last month.

Critics last year seized on the NYU fellowship program as part of a campaign against former State Impact Center Deputy Director Elizabeth Klein, whose nomination to be deputy secretary of the Interior Department was pulled amid opposition from powerful members of the Senate Energy and Natural Resources Committee that she was too hostile to oil and gas interests.

Since then, a number of the states that hired the NYU fellows are also pursuing lawsuits aimed at forcing oil and gas companies to compensate municipalities for the costs of addressing flooding, wildfires and other impacts stemming from the fossil fuel industry’s greenhouse gas emissions.

The center says it’s nonpartisan and provides expertise to attorneys general and places environmental lawyers in offices across the country. It is hosting a seminar next month that will include solicitors general from both Democratic- and Republican-led states.

“All work performed by NYU Law Fellows is identified, directed and managed solely by the attorneys general offices in which they serve, and the fellows’ duties of loyalty and confidentiality run solely to those offices, consistent with all applicable law,” State Impact Center Executive Director Bethany Davis Noll said in a statement.

The arrangement between the center and the attorneys general offices — although not entirely novel — raises a number of questions, said Paul Nolette, chair of the political science department at Marquette University.

“Even if it’s legal, it’s concerning to me,” said Nolette, who studies attorneys general. “It gets to the picture of AGs drifting more into an ideological direction where the client is much less the public and more the ideological and partisan interest in which the AGs are aligned.”

Use of outside counsel has been standard practice for decades. Many states that sued tobacco companies in the 1990s used private attorneys on a contingency fee basis — an arrangement that led to charges of insider deals and political favoritism and prompted additional guard rails in several states, including guidelines on hiring outside counsel, Nolette said.

The practice has continued as states seek experienced class-action attorneys to ramp up efforts to hold pharmaceutical manufacturers responsible for the opioid epidemic.

And it comes as state attorneys general like Ellison have pleaded with legislators for additional lawyers to handle increasingly complicated and burgeoning caseloads, Nolette said. Ellison this year asked lawmakers for seven more attorneys to handle complex cases. Though successful cases can deliver millions to the states, those funds do not flow to the attorneys general’s offices.

“State Legislatures frequently do understaff the AG office,” Nolette said, “and they don’t fully understand the value of having adequate staffing when it comes to enforcing civil laws.”

The fight over the NYU fellowship program took hold in Ellison’s reelection campaign after three Republicans running for their party’s nomination to challenge the attorney general all agreed at a March debate that they’d scrap the program if elected.

Doug Wardlow, a lawyer and former state legislator who lost to Ellison in 2018, said two NYU attorneys had been “planted” in the attorney general’s office “to push a radical left environmental agenda” that encompasses the state’s 2020 lawsuit that contends Exxon Mobil Corp., Koch Industries Inc. and the American Petroleum Institute should be held financially responsible for misleading the public about their contributions to climate change.

Wardlow — who is counsel to Mike Lindell, founder of MyPillow and champion of Trump’s false claims of a rigged presidential election — took aim at Ellison for making an “absurd claim” in the climate lawsuit.

“Regardless of what anyone thinks about the merits of that particular case — and I think that’s a bunch of hogwash — this is a conflict of interest,” he said at a debate sponsored by the conservative Minnesota Family Council. “It must stop.”

Ellison’s case, which was originally filed in state court, resembles dozens of other lawsuits that have been launched by state and local governments nationwide. The 8th U.S. Circuit Court of Appeals is currently considering whether Ellison’s case should land before state or federal judges — a procedural battle that has stalled progress on the lawsuits as industry lawyers vie for more favorable venues (Climatewire, March 16).

The Minnesota legislation that would have barred Ellison from using outside counsel didn’t mention it, but the involvement of the Bloomberg-backed fellowship program in the state’s climate liability lawsuit was the target.

Ellison defended the NYU program at hearings and in the local newspaper, saying the legislation would impair his office’s independence and violate the Minnesota Constitution.

The ban would mean his office could no longer use “pro bono attorneys, which save the state millions of dollars,” Ellison told lawmakers last month. Nor, he said, would his office be able to contract with outside law firms that are critical for highly complex litigation on issues beyond the environment.

Ellison said the NYU attorneys operate solely at his direction and have worked on a number of issues, including helping to land a settlement in a lead poisoning case.

In an April letter to the Minnesota legislation’s sponsor, Republican state Sen. Mary Kiffmeyer, Ellison said the identity of the outside attorneys’ paychecks “was then and is now irrelevant to my goal of expanding our office’s ability to provide excellent legal service to state agencies and the people of Minnesota, be it in environmental protection or any other area.”

Ellison has questioned the funding source of his chief critic — Meeks’ Freedom Foundation of Minnesota — noting that the group has received contributions related to two of the defendants in his climate lawsuit. Tax records show the group got $10,000 from API in 2012 and $47,000 from the Koch family’s foundation in 2017.

“The defendants are asking the Legislature to help them avoid being held accountable for their false statements by asking you to handcuff the plaintiffs,” Ellison told lawmakers last month.

Conservative groups began targeting the NYU fellowship program as soon as it started.

In 2018, Chris Horner, then a senior fellow at the Competitive Enterprise Institute, wrote a paper titled “Law Enforcement for Rent” that alleged that the program was an “elaborate, deliberate plan to politicize state law enforcement offices in the service of an ideological, left-wing, climate policy agenda that has been frustrated by the democratic process.”

Since then, Horner, a member of Trump’s EPA landing team, has targeted attorneys general with Freedom of Information Act requests about their arrangements with the State Impact Center. Adam Piper, the former executive director of the Republican Attorneys General Association, has labeled the NYU attorneys “liberal mercenaries.”

In New York, the conservative taxpayer watchdog group Government Justice Center in 2019 filed a complaint with the state Joint Commission on Public Ethics about the attorney general’s use of NYU lawyers. In Massachusetts, Attorney General Maura Healey’s (D) office was sued by the conservative group Energy Policy Advocates over documents relating to the fellowship.

Not all pushback against the State Impact Center has sat well with Republicans. A number of GOP attorneys general last September joined their Democratic peers in a friend of the court brief siding with Ellison in a public records lawsuit filed by Energy Policy Advocates.

In that case, Ellison had resisted turning over documents, in part citing a “common-interest doctrine” between state attorneys general who are sharing litigation. His Republican and Democratic counterparts agreed, writing that the doctrine “allows states to debate legal strategies, to share drafts and memoranda with each other as they prepare for filing deadlines, and to discuss their respective state interests with full candor.”

And the cases have revealed some interesting contradictions. Ellison noted that the board of Bloomberg Philanthropies includes such “accomplished Americans” as Henry Paulson, former Treasury secretary under President George W. Bush, and retired Adm. Michael Mullen, former chair of the Joint Chiefs of Staff.

Mullen and fellow former Joint Chiefs of Staff Chair Richard Myers have filed amicus briefs in several climate liability lawsuits, siding with industry and saying that the cases should be heard in federal court because they raise national and international policy issues (Climatewire, April 25).

Not every state that has worked with the NYU fellowship program has filed a climate liability lawsuit — but the partnerships have still caused controversy (Climatewire, May 24).

Willamette Week reported at the time that the state’s legislative counsel had determined that it was not. But Oregon Deputy Attorney General Fred Boss countered that the counsel’s office had looked at the wrong section of the law and that the work was “expressly under [the Department of Justice’s] direction and control” as required by law, the newspaper said.

In Washington state, where Democratic Attorney General Bob Ferguson also hired an NYU attorney, Horner obtained emails through FOIA that he said show the attorney general’s office in 2019 had questions about the sufficiency of attribution science — an evolving field that specializes in measuring the influence of climate change on individual weather events like hurricanes, heat waves, floods and wildfires.

Washington state Rep. David Hackney, a Democrat who has spoken in favor of the climate liability litigation, told E&E News that he’s confident the controversy won’t make a difference in Ferguson’s decision whether or not to pursue a climate case. Hackney noted that Washington state is under a “very environmentally friendly administration” led by Gov. Jay Inslee, a Democrat who ran for president in 2020 on a platform that prioritized climate action.

Hackney said of the state administration: “Pushback from the industry would do nothing but spur them on.”

Correction: This story has been corrected to reflect that Adam Piper is no longer executive director of the Republican Attorneys General Association.