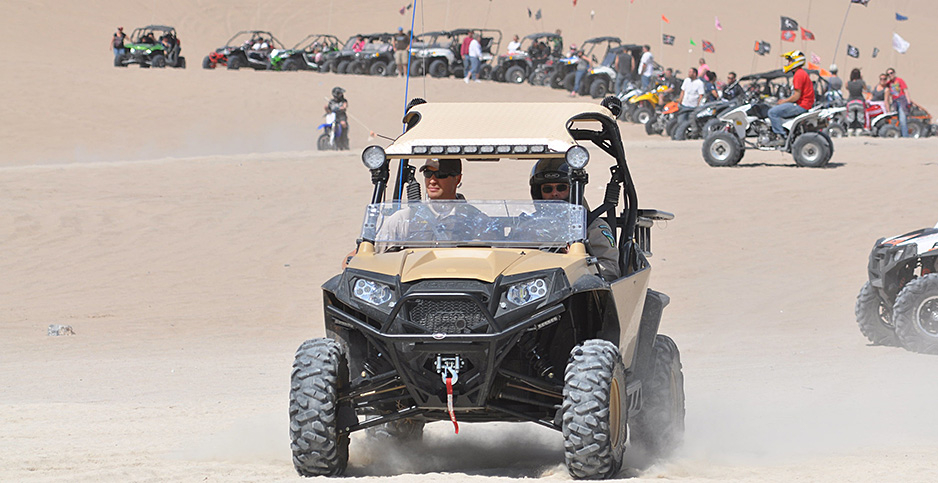 The Bureau of Land Management’s monthslong odyssey to replace ousted top cop William Woody is over.

BLM announced today that Eric Kriley, a law enforcement professional with the State Department’s Diplomatic Security Service, has been formally hired as director of the bureau’s Office of Law Enforcement and Security (OLES) — more than a year after Woody was dramatically removed from the office under still-mysterious circumstances. Kriley will begin work early next month.

He will take over a department with about 270 rangers and special agents who are responsible for enforcing federal laws and protecting natural resources on the 245 million acres of public lands that BLM manages.

He will be stationed at BLM’s new headquarters in Grand Junction, Colo.

Kriley is BLM’s first permanent OLES director since June 2019, when Woody was escorted out of the Interior Department’s Washington headquarters and required to surrender his firearm and badge (Greenwire, June 17, 2019).

Woody later filed an age discrimination and disability complaint against Interior that demanded he be reinstated to the director’s position he held off and on since 2003. Woody and BLM apparently settled that complaint, and BLM earlier this year confirmed that Woody is no longer employed at the bureau (Greenwire, Jan. 24).

"We are excited and fortunate to have Mr. Kriley join the BLM," William Perry Pendley, the bureau’s deputy director of policy and programs, said in a statement. "He will undoubtedly make a positive impact as he leads our law enforcement and investigative efforts."

Kriley has more than 20 years of law enforcement experience at the Diplomatic Security Service, which is the law enforcement and security arm of the State Department. It employs about 2,500 "special agents, security engineering officers, security technical specialists, and diplomatic couriers" stationed in the United States and at more than 270 locations worldwide, according to the State Department.

Press material provided by BLM noted that Kriley has experience in "training, counterintelligence, and sensitive investigations."

Kriley served in "embassies, consulates, and offices in Afghanistan, Poland, Kenya, and Egypt," specializing in "criminal and administrative investigations, as well as protective operations, intelligence analysis, and physical and information security," BLM said.

He also served on a joint terrorism task force in New Orleans, "where he led his office through the aftermath of Hurricane Katrina," BLM said. He has also worked as a liaison within the U.S. Special Operations Command in Tampa, Fla., according to press materials.

"The OLES has been without a permanent director for over a year, and I’m happy to see that the long process of filling that position has now been completed," said Ed Shepard, president of the Public Lands Foundation, a BLM retirees group.

"I don’t know Mr. Kriley, but it appears he has been a successful leader in law enforcement for many years, including the many different facets of law enforcement and investigation," said Shepard, who retired in 2012 after a 38-year career at BLM.

"The OLES has gone through a lot of disruption over the past several years, and having a permanent director to lead the cadre of highly experienced law enforcement rangers and agents is a big step in moving that important part of BLM’s mission forward," he added.

Today’s announcement comes less than two weeks before Election Day, with no guarantee that President Trump will be reelected. It’s expected that Democratic presidential nominee Joe Biden would clean house at Interior if he wins.

The OLES director’s position is a Senior Executive Service-level post, and officials in SES-level positions can be transferred to any different federal agency with little to no recourse.

Kriley’s hire also comes amid questions about BLM’s law enforcement priorities in the current administration and how those priorities would change if Biden is elected.

Critics took Pendley’s comments as a signal that the administration would weaken the bureau’s law enforcement branch, which has been criticized as too aggressive by GOP Western leaders, including Utah Sen. Mike Lee.

Casey Hammond, Interior’s principal deputy assistant secretary for land and minerals management, told E&E News in an interview in August that BLM had already picked a new director and was finalizing the paperwork before an announcement.

But Hammond echoed the same points Pendley made in his op-ed when discussing the new hire.

Hammond orchestrated Woody’s removal during a brief stint "exercising the authority of director" of BLM — the same title Pendley had until a federal judge last month ruled the designation illegal.

Hammond placed Woody on administrative leave following an Interior Department Office of Inspector General investigation that found Woody had used a "government-owned vehicle" for work for nearly a year without filling out the appropriate paperwork.

In a letter, Hammond wrote to Woody that he was removing him based on the findings in the IG’s report completed in October 2018 but also implied that Woody was under an ongoing investigation by the Interior IG.

The IG’s office later disputed that, saying Woody was not the subject of any further investigations (Greenwire, June 20, 2019).

BLM has yet to explain why Woody was removed.

Jason O’Neal took over as acting director of OLES within weeks of Woody’s ouster. O’Neal returned in February to his previous position of assistant director of the Bureau of Indian Affairs’ Office of Justice Services.

Shannon Tokos, who was acting deputy director of operations at OLES, has served as the department’s acting director since that time.

Tokos will return to her previous deputy director’s position, a BLM spokesman said.

BLM appeared to have trouble filling the OLES director’s position, advertising the job at least twice this year on USAJobs (Greenwire, April 28).

A retired BLM law enforcement ranger who has watched the OLES director search closely told E&E News earlier this year that the abrupt manner in which Woody was removed had "a chilling effect upon possible candidates."

Kriley earned both bachelor’s and master’s degrees in criminology from Indiana University of Pennsylvania, according to BLM.

He is a veteran of the U.S. Army Reserves Military Police Corps, it said.