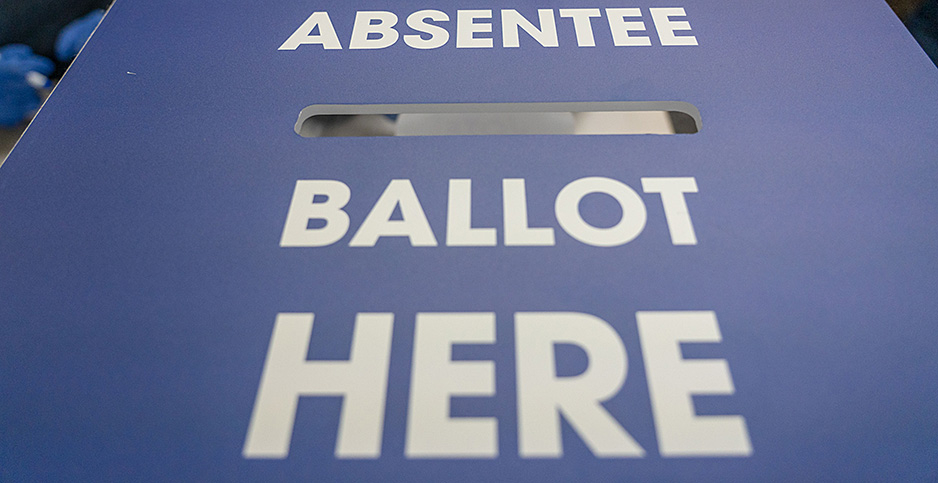 The results of the presidential race remained undetermined today as ballot tallies continued, while Democratic nominee Joe Biden said he was "optimistic" and President Trump decried the results as a "fraud on the American public."

With ballot counting expected to continue for days, six states’ presidential winners have yet to be called.

In a seventh, Wisconsin, the state’s election commission said late this morning that Biden won by about 20,000 votes. The Trump campaign quickly signaled its plan to ask for a recount.

Focus has turned primarily to two others: Michigan, where Biden currently holds a narrow lead; and Pennsylvania, where Trump is currently up, but large blocks of votes are still outstanding.

Biden encouraged his supporters to stay the course. "We are confident about where we are," he said in brief remarks in Wilmington, Del. "Keep the faith, we are going to win this."

Trump, who has raised doubts about counting ballots after Election Day, made baseless claims last night that the election was being stolen and vowed to challenge results.

"We were getting ready to win this election, frankly we did win this election," Trump said in a brief speech from the White House. "So, our goal now is to ensure the integrity, for the good of this nation, this is a very big moment, this is a major fraud on our nation."

The president reiterated his threat to challenge the election outcome in the Supreme Court if he loses and made unfounded calls for "all voting to stop."

"We want the law to be used in a proper manner. So we’ll be going to the U.S. Supreme Court. We want all voting to stop," Trump said. "We don’t want them to find any ballots at 4 o’clock in the morning and add them to the list."

But at least one top Republican lawmaker urged patience with the nation’s voting process, an unusual cycle that saw a surge in mail-in and absentee ballots because of the uncontrolled coronavirus pandemic.

"The result of the presidential race will be known after every legally cast vote has been counted," Florida Sen. Marco Rubio (R) wrote on Twitter this morning.

Environmental activist groups, including the Sierra Club and Environmental Defense Fund, likewise pressed publicly to ensure all ballots are counted.

"With the presidential election too close to call, the eyes of the world are on the United States," EDF President Fred Krupp said in a statement.

Democrats were denied the sweeping victory some had predicted early in the night, as results showed Trump winning in Florida and taking leads in North Carolina and Georgia, which have yet to be called and remain close. Trump also prevailed in Ohio, repeating his 2016 victory there.

As the night wore on, however, results began to tip in Biden’s favor.

He took a significant lead in Arizona, which has yet to be called by several media outlets but would represent flipping a state that Hillary Clinton lost in 2016.

And as early mail-in ballots were counted, Biden closed the gap, appearing to win Wisconsin and leading in Michigan and Arizona.

If those leads hold, the former vice president would need to win one of the following currently undecided states to claim an Electoral College win: Nevada, Pennsylvania, Georgia or North Carolina.

In that scenario with Biden carrying Wisconsin, Arizona and Michigan, Trump would need to carry all of the following undecided states: Pennsylvania, Nevada, North Carolina and Georgia.

Analysts said it will be tough for Trump to prevail given Biden’s advantage in mail-in ballots so far.

"He’s not going to win them all this time," Scott Segal, a partner and energy industry analyst with Bracewell LLP’s Policy Resolution Group who discussed election results this morning referring to Georgia, North Carolina, Michigan, Pennsylvania and Wisconsin.

But, Segal added, the Democratic landslide some had predicted did not come to fruition.

Even if Biden captures the White House, he said, "it won’t be the blue wave that a lot of people talked about."

Trump’s vow to go straight to the Supreme Court may be more bluster than strategy, explained Michael Gottlieb, a partner in Willkie Farr & Gallagher’s litigation department and head of the firm’s Crisis Management Group.

"Sometimes you see a movie with a trial lawyer that’s standing outside of the trial and saying, ‘We’re taking this all the way to the Supreme Court. We’re putting the system on trial!’ I kind of interpret the president’s comment to be equivalent to that," Gottlieb said. "You can’t file an original action in the Supreme Court demanding that the count stop."

Instead, Gottlieb noted that Trump’s campaign attorneys would need to challenge vote totals in states where the president is behind — claiming an undercount — or in those where he is ahead — to stop vote tallies.

"It’s a very tall order given the way the counting appears to be heading in Wisconsin, Michigan, Pennsylvania," Gottlieb said.

He noted that any action would need to come before the "Safe Harbor" deadline mandated under U.S. law, which falls six days before the Electoral College is set to meet. That date, which falls on Dec. 8 this cycle, mandates when states must select their electors.

Here is a breakdown of where things stand in the remaining states at time of publication.

Most of the remaining votes to be counted, however, are coming from Wayne County, a Democratic stronghold where Detroit is located.

Moreover, those votes are mail-in ballots, and Biden holds a commanding 68.3%-30.4% lead among absentee votes tallied in the state so far, according to a New York Times analysis. So Biden’s lead is expected to grow.

A similar dynamic is playing out next door in Wisconsin, as Biden built his lead when mail-in ballots were counted later in the night.

The Wisconsin Elections Commission told NBC News this morning that "all of the ballots have been counted" and Biden won by 20,697 votes.

That margin may be within 1% of the total, and the Trump campaign has signaled it may seek a recount.

Pennsylvania is the biggest remaining Electoral College prize with 20 votes. Its results are the most unknown.

However, big chunks of votes remain uncounted in the heavily Democratic areas of Philadelphia and Pittsburgh.

Many of the uncounted ballots are mail-in, and Biden holds a 78.4% to 20.7% lead among absentee votes counted so far, according to a New York Times analysis.

The results in Pennsylvania aren’t expected to be finalized for days, but those remaining ballots suggest the race for the Keystone State will tighten.

Trump tweeted about his shrinking lead in the state at 12:01 p.m. EST.

They are working hard to make up 500,000 vote advantage in Pennsylvania disappear — ASAP. Likewise, Michigan and others!

The Associated Press has called the state for Biden, though the Trump campaign has strongly pushed back, claiming it is "just plain wrong."

A Biden win would represent a key pickup of 11 electoral votes for Democrats after Trump carried the state over Hillary Clinton in 2016.

An Arizona Republic survey of nine of the state’s 15 counties said there are at least 400,000 ballots outstanding, not including an untold number in the remaining jurisdictions.

There remains a significant number of ballots to be counted.

Some blocks of ballots still to be counted appear to be in densely populated Democratic areas, including DeKalb County, in the Atlanta area. DeKalb had reported 80% of the expected vote total at time of publication, so results in the Peach State could tighten.

A winner has not been declared, however, because some of the outstanding ballots are from Mecklenburg and Wake counties — the homes of Charlotte and Raleigh, respectively — two heavily Democratic areas with large populations.

Nevada has been one of the slowest states to report results. At time of publication, 86% of expected votes have been reported.

Nevada is not expected to release any more vote tallies until noon EST tomorrow.