State of the Union: All the energy takeaways 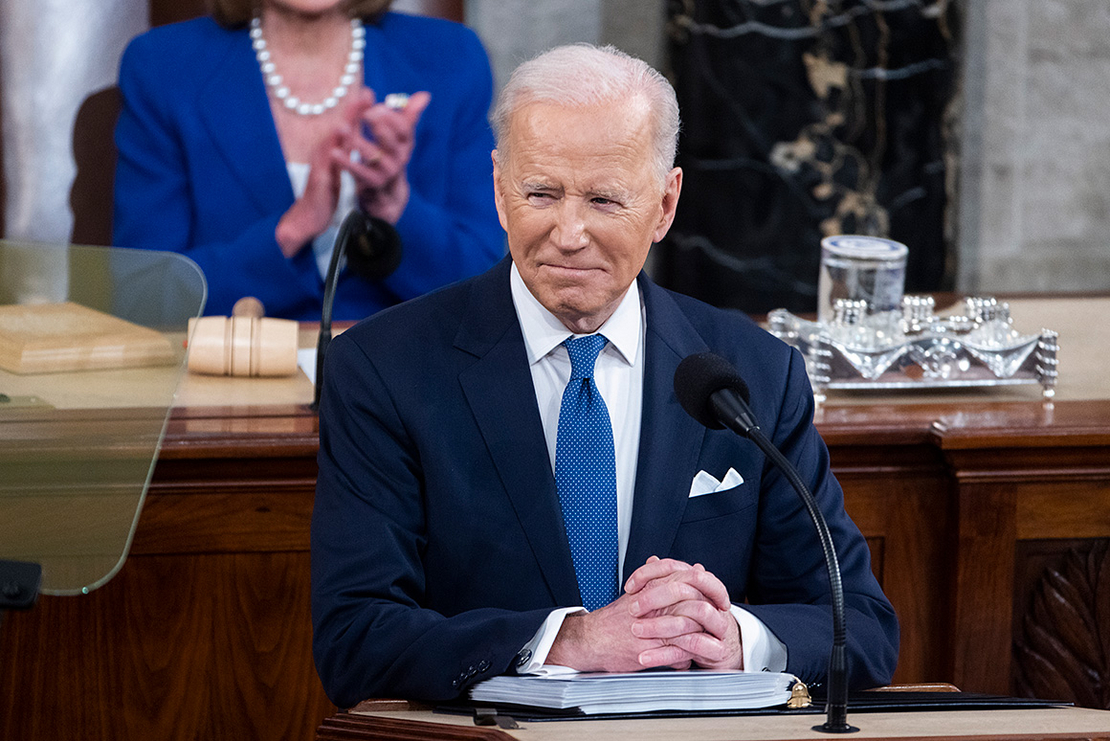 President Biden pledged last night to battle rising energy prices and bolster electric vehicles as he delivered a warning to Russia about the ongoing war in Ukraine, one of several crises weighing on his administration.

Speaking to a divided Congress, Biden found moments of bipartisanship as he expressed support for Ukrainians under attack by Russia. Other moments saw Democrats and Republicans retreat to their familiar corners.

Energy didn’t dominate Biden’s first State of the Union speech, but it surfaced at key times — whether to promote EVs and renewables or to address gasoline expenses faced by consumers.

“A Russian dictator, invading a foreign country, has costs around the world,” Biden said in prepared remarks. “And I’m taking robust action to make sure the pain of our sanctions is targeted at Russia’s economy. And I will use every tool at our disposal to protect American businesses and consumers.”

Biden also touted efforts to bolster infrastructure, from roads and airports to ports and waterways. He highlighted the bipartisan infrastructure bill passed last year, and he said there will now be an “infrastructure decade.” Biden said millions of good jobs for Americans will be created.

“And we’ll do it all to withstand the devastating effects of the climate crisis and promote environmental justice,” he said, not dwelling on his stalled climate agenda in Congress.

Biden touted a plan for “a national network of 500,000 electric vehicle charging stations,” which has been a point of debate in past months (Climatewire, Nov. 30, 2021). He put a spotlight on EV manufacturing as well, saying companies are choosing to invest in factories in the U.S.

A chant of “USA” broke out from part of the crowd after Biden talked about themes around domestic manufacturing. And as expected, some of the night’s applause lines attracted cheers from Democrats as many Republicans sat quietly.

Biden called for corporations and wealthy Americans to “start paying their fair share,” saying that last year many top companies didn’t pay federal income tax. The president noted his proposal for a 15 percent minimum tax rate for corporations, an issue the energy industry has been watching.

Biden also outlined what he said was a plan to fight inflation, lower costs and lower the deficit.

For example, he said it would cut energy costs for families an average of $500 per year by combating climate change.

“Let’s provide investments and tax credits to weatherize your homes and businesses to be energy efficient and you get a tax credit; double America’s clean energy production in solar, wind and so much more; lower the price of electric vehicles, saving you another $80 a month because you’ll never have to pay at the gas pump again,” Biden said.

“If you are an American family worried about inflation that’s crushing you, you couldn’t have felt very good about tonight,” he said in an interview with PBS after the speech.

Iowa Gov. Kim Reynolds, in the Republican response to the State of the Union, criticized Biden for being “too little to late” on foreign policy.

“We can’t project strength abroad if we are weak at home,” she said.

“I am pleased with his call for action to guide us away from climate catastrophe and onto a path of safety — a path powered by zero-carbon energy, to free American consumers from price shocks and the world from aggressive and corrupt petro-dictators,” the senator said in a statement after the speech.

Biden’s outline of his energy agenda emerges at a moment when many political and economic realities are conspiring against it. Chief among those is worsening inflation that has hampered the U.S. economy.

“My top priority is getting prices under control,” Biden said in his address last night. “We have a choice. One way to fight inflation is to drive down wages and make Americans poorer. I have a better plan to fight inflation. Lower your costs, not your wages.”

“Make more cars and semiconductors in America,” he said. “More jobs where you can earn a good living in America. And instead of relying on foreign supply chains, let’s make it in America.”

But inflation has been one of the biggest challenges for Biden winning over Congress for his climate and energy agenda.

On Feb. 16, the Labor Department reported that the consumer price index — a commonly used benchmark of inflation — rose 7.5 percent over the previous 12 months, more than any one-year period since 1982. For energy products like gasoline and electricity, the rise was especially pronounced, at 27 percent.

Those numbers are painful for any sitting president, experts said.

“There’s nothing Americans dislike more than rising gas prices,” said Meg Jacobs, a scholar and lecturer at the Princeton School of Public and International Affairs. “And there’s almost nothing worse for a politician. So, the main lesson is, don’t ignore what’s top of mind for American consumers right now.”

At the same time, some analysts have said the situation is very different now, considering that oil prices were regulated in the 1970s, among other things.

A group of Democrats in the House said in a joint statement after the speech that they would support the president’s climate and clean energy policies on Capitol Hill.

Members of the House Sustainable Energy and Environment Coalition, led by the co-chairs, Reps. Gerry Connolly (D-Va.), Doris Matsui (D-Calif.), and Paul Tonko (D-N.Y.), said, “We heard the president’s message loud and clear that we must finish the work the House started and get these climate investments signed into law.”

Some political scientists said they believed Biden’s climate priorities — in particular, new and expanded incentives for clean energy and energy-linked manufacturing — could find support in Congress, notwithstanding inflation and the Russia-Ukraine war.

Along with pushing domestic manufacturing, Biden said there’s also a need to level the playing field with China and other competitors. He called on Congress to pass the “Bipartisan Innovation Act” to make record investments in emerging technologies and U.S. manufacturing.

The war could help Biden make a case for American-made clean energy as a national security priority, said David Victor, a political scientist and professor of innovation and public policy at the University of California, San Diego.

So far, the war hasn’t endangered clean energy’s global base of supplies to the same extent that it has for oil and gas. Russia is a major producer of nickel, a key component of the lithium-ion batteries used in electric vehicles and energy storage.

But given that most of Russia’s nickel goes toward the global steel industry, “it is estimated that a direct impact on the battery supply chain will be limited,” wrote Echo Ma, analyst at Norway-based Rystad Energy, in a research note yesterday.

Scaling up a U.S.-based supply chain for clean energy, ranging from mining to processing and manufacturing, has been a key object of Energy Department planning. Last week, DOE released a blueprint on how to do it, with dozens of recommendations for Congress and other policymakers.

By framing those incentives as a tool for combating rising energy costs, Biden might be able to win over Manchin, said Paul Bledsoe, a strategic adviser at the Progressive Policy Institute.

“I do expect this combination of inflation and Ukraine crisis to drive a standalone energy and climate package this year,” said Bledsoe, who also worked as a climate adviser for the Clinton administration.

To ease the tight oil market, Biden joined the International Energy Agency this week in an agreement to release 60 million barrels of crude from global reserves. Such a coordinated tap on reserves from the U.S. and other crude nations hasn’t happened in volumes since 2011.

“America will lead that effort, releasing 30 million barrels,” the president said in his address, adding that “we stand ready to do more if necessary.” He said the “steps will help blunt gas prices here at home.”

But optimism over the crude oil release was not universally shared among analysts, who questioned whether the move would do much to combat rising energy costs.

“He can release from the strategic reserve — that would seem like he’s doing something — but that’s not actually going to solve the problem. And he has not had any luck putting pressure on OPEC+ to increase production,” said Jacobs, of Princeton University, referring to a group that includes OPEC and other nations such as Russia.

The Strategic Petroleum Reserve release is not expected to ease pressure from the president’s critics, who are using Russia’s aggression to underscore the importance of domestic oil and gas development and criticize Biden’s clean energy focus.

The American Petroleum Institute sent a letter to the administration, yesterday, urging the White House to make clear its support for oil and gas domestically amid the price upheaval and inflation.

“We commend the administration’s focus on addressing climate change and share the goal of reducing emissions across the economy, but we cannot let that objective detract from the clear and present need for continued responsible investment in oil and natural gas development,” CEO Mike Sommers said in a statement.

Oil state Sens. John Kennedy (R-La.) and Dan Sullivan (R-Alaska) slammed the president’s oil and gas policy in a letter, signed by more than 20 other lawmakers.

“Your Administration’s energy policies — which focus on restricting, delaying, and killing the production of American energy — have had the predictable but catastrophic effect of driving up energy prices for American working families, increasing pinks slips for American energy workers, and significantly empowering our adversaries, especially Putin, who has used energy as a weapon for decades,” they said.

But even as oil allies are pushing the administration to increase oil and gas support, some climate and environmental groups say they are growing disillusioned with the president’s allowance of ongoing fossil fuel production on federal lands and offshore.

“President Biden has made incredible strides in pushing renewable energy, but the urgency of the climate crisis demands much more,” said Natalie Mebane, senior director of climate solutions at the Wilderness Society, after the speech. “In his first year in office, President Biden approved over 3,500 drilling permits on public lands, which could release more than 400 million metric tons of carbon dioxide equivalent (CO2e), or the annual emissions of 87 million cars.”

The president’s speech gave little attention to the climate — only mentioning it twice.

Still, clean energy groups said they were encouraged by the president’s mention of renewables and echoed the administration’s call for Congress to support the energy transition.

“We agree with the President that it is past time to develop and rely more on our own resources to power the American economy. We have the capacity,” Abigail Ross Hopper, president and CEO of the Solar Energy Industries Association, said in a statement. “Failure to enact comprehensive clean energy and climate policy is no longer an option.”

Tens of billions in federal funds will be doled out for clean energy under that law. The Biden administration has promised to direct 40 percent of the “benefits” from those investments toward disadvantaged communities.

In January, however, 16 Republican governors wrote to Biden in protest of that policy, demanding that his officials “defer to the states” if they wished not to implement the president’s “social agenda” (Climatewire, Feb. 4).

The infrastructure law’s innovation-minded aspects, meanwhile, have come under attack from state and national environmental justice groups, who have denounced the idea of moving billions of dollars for large-scale demonstrations of carbon capture and hydrogen.

Even if Biden manages to persuade Congress on clean energy tax incentives, the president’s relationship with the party’s left is likely to deteriorate further, said Victor of UC San Diego.

The incentives aren’t likely to halve U.S. emissions by 2030, he said, referencing the Biden administration’s nearest-term climate goal versus 2005 levels.

“I’m sure it’s going to be seen as a disappointment by folks who thought this would be a turning point on climate,” Victor said.

It’s also not clear how Biden will manage to placate Manchin and environmental justice groups at the same time, he added. “I think that is a great puzzle.”