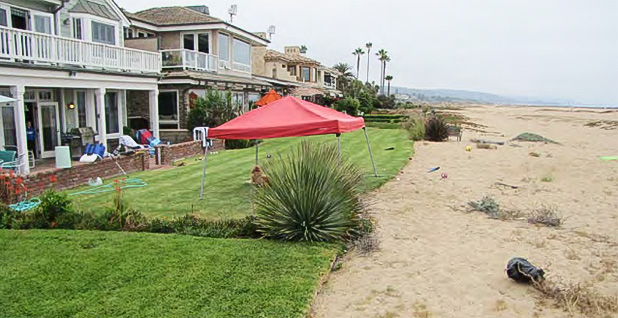 Oceanfront homeowners in California who have taken over swaths of public beach with expansive lawns and other landscaping must remove the intrusions, the state Coastal Commission said yesterday.

More than 55 homeowners in Newport Beach have installed grass decks, patio furniture and other barricades on public sands. All together, it takes up nearly 71,000 square feet near "the Wedge," a popular surfing spot known for large waves in Orange County, south of Los Angeles.

The California Coastal Commission unanimously rebuked Newport Beach’s effort to allow some of the beach takeover to remain. The city wanted permission to amend its rules and let homeowners keep up to 15 feet of their encroachment. In exchange, city officials wanted to charge fees they said would bring in about $300,000 a year. They pledged that money would go toward beach improvements.

Commissioners instead described it as wealthy homeowners stealing land that residents of all income levels have a right to use.

"I’m quite actually flabbergasted by the audacity of some of this encroachment," said Commissioner Linda Escalante. "It’s practically like building an oasis in public property, or squatting by the rich."

The commission, a powerful agency that controls development along 1,100 miles of coastline, prioritizes beach access in the Golden State. Sea-level rise projections also factored in. The commission has been cracking down on unpermitted seawalls and other barriers and warning cities they need to plan for higher waters.

U.S. Geological Survey modeling casts Newport Beach as "very vulnerable to sea-level rise impacts," said Karl Schwing, the commission’s south coast district director. About 200 feet of the beach will disappear with 2.5 feet of sea-level rise, and 300 feet will vanish with 6.6 feet of higher ocean, he said.

"As the beach narrows with sea-level rise, greater pressure will be put on the smaller area of sandy beach that does remain," Schwing said. Beachgoers generally are uncomfortable sitting close to homes, he said, so the resident takeover of sand pushes visitors closer to the water.

"Every inch of that beach as it erodes through sea-level rise is precious to the state of California," said Commissioner Donne Brownsey.

The fight over the land dates back more than five years. The commission in 2012 sent notice of violation letters to what it deemed "the most egregious violations," and last month sent additional letters. The city in response proposed amending its land-use plan to allow residents landscaping on 15 feet that’s part of a city right of way. The city said it planned to clear out anything beyond that 15 feet.

The city argued it was previously allowed to do it. In 1991, Newport Beach crafted policy to deal with residents who’d installed beach encroachments in a different part of the city known as the Balboa Peninsula. It charged those residents annual fees. The coastal commission at the time allowed the land takeovers to stay.

"It has been an exceedingly effective program," Don Schmitz, a planner working with the city, told the commission. Through the effort, the city reaped $1.7 million between 2007 and 2017, money used to construct additional beach access and add parking, signs and landscaping. "We think it would be a great idea to do the same thing on the eastern side of the peninsula."

Funds paid by residents in the area now under scrutiny could go toward adding bicycle racks, trash cans, new lifeguard towers and disabled access including motorized beach wheelchairs, he said.

Schwing with the commission said several factors have changed since 1991, including awareness of sea-level rise. In addition, he said, the snowy plover was listed as threatened under the Endangered Species Act. The shorebird is known to nest in the area.

In terms of sea-level rise, Schmitz argued, "this is a very wide beach," ranging from 300 to 600 feet in depth.

People who addressed the commission urged the agency not to allow the city’s plan to permit the 15 feet of landscaping.

Sharon Fudge, who said she was speaking on behalf of the Orange County Conservation Committee of the Sierra Club, said Newport Beach has ignored its own codes barring unpermitted development.

"Newport Beach apparently feels it’s not responsible for enforcing the laws and regulations that protect our finite natural resources," she said. "But rather their duty is to enable property owners, dog walkers and paragliders to break the law without repercussions."

"Cities up and down the coast are watching this," he said. "We need to cut this off" and the commission should switch to "a cease and desist and enforcement action and use your abilities to fine. I think that will resolve the issue."