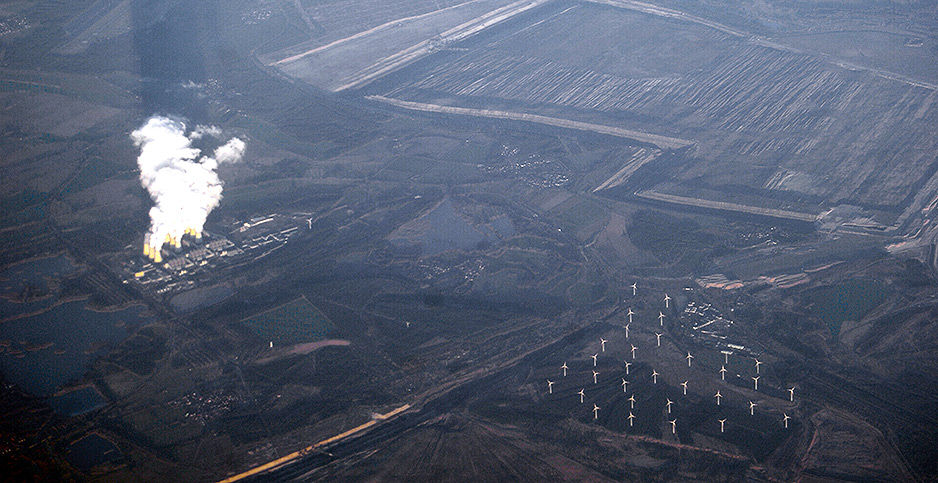 An aerial view of a nuclear power plant and wind turbines in Norway. In the United States, there’s a debate about what constitutes clean energy. Michael Pollak/Flickr

But how, exactly, to do it causes friction. Particularly vexing is the role of nuclear power in America’s future clean energy mix.

For now, the debate on Capitol Hill is academic. There will be no "Green New Deal" as long as President Trump occupies the White House and Sen. Mitch McConnell, the Republican majority leader from coal-reliant Kentucky, runs the Senate.

But the outlines of a carbon-free electric sector are already becoming apparent outside the nation’s capital. Minnesota, New Mexico, New York and Washington state are all considering legislation this year to decarbonize their power sectors. With the exception of Minnesota, where Republicans control the Senate, those bills stand a reasonable chance of passing.

The states offer a potentially important blueprint for national climate hawks. Each bill proposes dramatic increases in renewable energy generation. Yet they also leave the door open to traditional low-carbon resources like nuclear and hydro, as well as potential new technologies.

"We plan to pursue a portfolio approach, where the most cost-effective resources that are zero carbon come forward," said Alicia Barton, president and CEO of the New York State Energy Research and Development Authority.

New York is illustrative of the wider trend. A bill backed by Gov. Andrew Cuomo (D) would require 70 percent of all the Empire State’s electricity to come from renewables by 2030. The measure calls for hiking the state’s target for offshore wind from 2,400 megawatts in 2030 to 9,000 MW in 2035 and doubling its level of distributed solar from 3,000 MW in 2023 to 6,000 MW in 2025. Hydropower would also qualify as a renewable resource under New York’s plan, potentially allowing for significant amounts of electricity to be imported from Quebec.

In 2040, all the state’s power would need to come from carbon-free sources.

"The entire goal here is to focus on decarbonization," Barton said. "Carbon is really the attribute that we’re solving for."

The idea of a zero-carbon power grid would have seemed implausible, if not impossible, not long ago. Renewables’ rapid cost declines, grid operators’ increasing comfort with handling intermittent generation and energy efficiency measures have turned the tables in recent years.

Xcel Energy Inc., a Minneapolis-based power company, became the first major utility to commit to decarbonizing its electricity supply last year (Climatewire, Dec. 5, 2018). The announcement built on a steady stream of utility pledges to make deep cuts in their carbon emissions, and it followed Xcel’s decision to close two coal units in Colorado early and replace their power with renewables.

"It really helps change the conversation in the state for what’s possible," said Minnesota state Rep. Jamie Long, a Democrat who authored a bill for greening the state’s power sector. "I’m hoping we can match some of that boldness with legislative policy for what we want to achieve as a state."

The requirements in Long’s bill vary slightly by utility, but it would require power providers to generate at least 80 percent of their electricity from renewables by 2035. All the state’s power would need to be carbon-free by 2050. That leaves a carve-out for other technologies, Long said.

His counterparts in other states follow a similar approach. New Mexico would require that half the state’s electricity be generated by renewables in 2030, and 80 percent in 2040. Washington would make all its electricity sales greenhouse gas neutral by 2030 but would allow its utilities to buy credits for 20 percent of their power. By 2045, all electricity would need to come from renewables and other carbon-free resources.

"We know how to get to 80 to 90 percent renewable affordably. That last 10 percent is still an open question," Long said. "We know there will be more technological innovations in the next 30 years that will help us get there, but we’re not sure what those are and when we’ll get there. I wanted to leave that open for flexibility."

Greens are ecstatic about the trend. Outside of California, which passed a bill to decarbonize its power sector last year, the wave of clean electricity legislation represents the most concerted attempts at passing ambitious climate legislation since Trump took office.

All renewables vs. carbon-free

That hasn’t stopped debate over whether states should be pursuing 100 percent renewable standards or the carbon-free standards being pursued today. The disagreement seeped into the rollout of the "Green New Deal" in Washington, D.C., last week, with the movement’s members seemingly split on the appropriate role for nuclear.

A fact sheet posted on the website of Rep. Alexandria Ocasio-Cortez, the high-profile freshman Democrat from New York, called for phasing out nuclear, America’s largest source of zero-carbon electricity today. After a brief tussle among supporters of the plan, the fact sheet disappeared from the congresswoman’s website (Energywire, Feb. 8).

Advocates of an all-renewable solution argue that new nuclear facilities are too expensive to build, while the problem with their waste remains unresolved. They also contend that new demand management tools, microgrids and other upgrades to America’s electric grid will make it possible to power the country on wind, solar and other technologies, like small-scale hydro and geothermal.

"We sent people to the moon; we can transition our aging electric grid to run on 100 percent renewable energy if we put the right policies in place and commit to making that our reality," said Jodie Van Horn, who leads the Sierra Club’s Ready for 100 campaign.

Others urge caution in placing too much weight on the backs of renewables, arguing that states should set technology-neutral standards that foster innovation. There’s no telling what technology might be available in coming decades, they note, pointing to the rapid decline in renewable costs and the explosion in hydraulic fracturing a decade ago.

"I think we should not limit by technology, nor should we limit by whether the resource is supply side or demand side," said Katherine Hamilton, chairwoman of 38 North Solutions, a consulting firm. "The less costly, more efficient solutions will rise to the top and first deployed in any case."

There is widespread agreement among climate hawks about this: There are more immediate concerns facing would-be carbon-cutters. In the near term, closing coal plants, fighting new natural gas plants and building lots of renewables are what’s required in both the 100 percent renewable and carbon-free scenarios, they note.

The state efforts illustrate the logistical challenges of greening the grid. In New York, large-scale renewables face land constraints onshore. There is also the matter of transmission. Much of the state’s renewable generation is upstate, while the demand is located in and around New York City. Offshore wind would help ease congestion of New York’s transmission lines, but it alone doesn’t solve the problem, analysts said.

Across the country, Washington state boasts one of the least carbon-intensive power grids in the country, thanks to the large supply of hydropower. But Washington’s investor-owned utilities have little access to that hydro, which is supplied by the Bonneville Power Association and purchased by the state’s public utilities.

In a hearing with state lawmakers, the utilities pleaded for flexibility that would allow them to meet the state’s goals.

"I understand the state is choosing a new policy path. We’re looking at how to do that with you, but how do we do that in an equitable way?" Brandon Houskeeper, director of public affairs at Puget Sound Energy Inc., told a House committee exploring the issue. "That’s going to include making sure we have proper off-ramps for reliability purposes, to make sure if transmission or other barriers, we recognize them and we’re allowed to run thermal units. It means having cost caps for customers so they don’t shoulder this load alone."

That sentiment is widely echoed across the utility industry. Xcel, in a statement, touted its efforts to expand renewables but raised concerns about the potential costs associated with high renewable mandates. Development of new clean energy technologies potentially holds the key to a carbon-free grid, it said.

Power companies are supportive of cutting power emissions and have shown they can do so in the absence of government mandates, said Emily Fisher, general counsel at the Edison Electric Institute, a trade group representing the country’s investor-owned utilities. Flexibility is key, she said.

"The industry has always been committed to affordability and reliability. We’re getting to a point where it is becoming more affordable and reliable to provide even cleaner energy," Fisher said.

Of the distinction between 100 percent carbon-free and renewable, she added, "I don’t think 100 percent clean is diminishing committment to renewables, but it also gives an opportunity to recognize other clean resources that can also help to keep electricity reliable and affordable."

One factor that could add some urgency to the carbon-free versus renewable debate: the potential for nuclear plant retirements. The Rhodium Group, an economic consulting firm, estimates that as many as half of the country’s nuclear plants could retire by 2030. Nuclear today represents about 20 percent of all U.S. power generation and 60 percent of the country’s carbon-free electricity.

"It’s not just about tons in the future. It’s about tons now. We’ve got to get emissions down quickly," said John Larsen, a director with Rhodium. "We could ramp up renewables substantially in that decade, but we might end up standing still when it comes to clean generation. That is leaving tons on the table, so to speak."

Washington state Rep. Gael Tarleton (D) has heard the definition of clean energy debated at length over the last nine months, as she helped craft the bill now under consideration by lawmakers in Olympia. Washington has one nuclear plant, the Columbia Generating Station. Her bill doesn’t propose eliminating the plant, but it does not qualify as a renewable resource, she said.

Yet Washington has changed course in other areas. Incremental power production from dam improvements would qualify as a renewable resource under the bill, which is part of a broader package of climate legislation proposed by Gov. Jay Inslee (D) (Climatewire, Dec. 11, 2018).

"That is a significant departure from the demand of the environmental community up until this year. The only reason why this piece of legislation includes it is because they acknowledge it was necessary to give credit to incremental hydro to more rapidly adopt a clean energy system," Tarleton said.

Of course, decarbonizing the electric sector is only part of the challenge. Transportation is now the greatest source of greenhouse gas emissions nationally, accounting for more than 40 percent of Washington’s emissions, the most of any sector.

But if greens are to decarbonize transportation, where emissions are more diffused and harder to tackle, they need to show people tangible evidence that sweeping change is possible. Like in the power sector.

"If we can figure out a way to clean up our grid, then it will give us the confidence to tackle the carbon pollution in transportation," Tarleton said. "We need a victory to show people we can make conscious choices to change the way we live our lives."