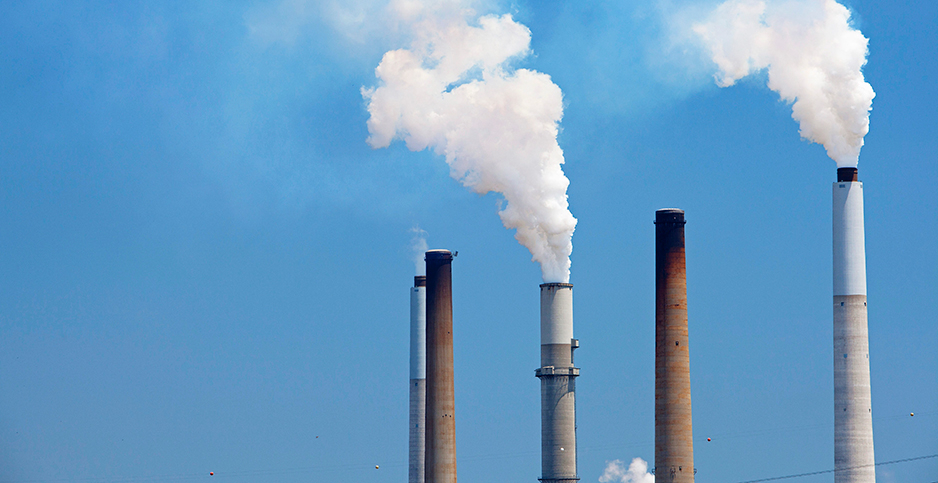 Emissions from a coal-fired plant in Kentucky. Jim West/agefotostock/Newscom

After turnovers in political leadership, a few states that once opposed the Obama-era Clean Power Plan are now joining the battle waged by Democratic attorneys general against Trump’s Affordable Clean Energy rule in the U.S. Court of Appeals for the District of Columbia Circuit (Greenwire, Aug. 13).

Some states that once supported the Obama rule are absent from the Trump administration challenge, while others are joining the fray for the first time.

Unlike the Clean Power Plan, in which EPA placed a limit on carbon dioxide emissions, the ACE rule imposes no cap on greenhouse gas releases and contains provisions that some experts say could extend operations of coal-fired power plants.

"A lot of them have been clear that the Clean Power Plan and the EPA’s responsibility under the Clean Air Act are not just about the environment; they’re also about ensuring clean air for citizens in the states they lead," she said.

Aside from the states, a coalition of environmental organizations and a pair of public health groups have also launched challenges against Trump’s replacement rule. Energy industry interests have intervened in support of the new regulation.

States led by Republican attorneys general are also expected to interject in the ACE rule’s defense.

"A lot of things that we’ve heard today from the AGs should be viewed as political statements designed to show that they care about climate change and are determined to fight the Trump Administration at every turn," said Bracewell LLP partner Jeff Holmstead, a former George W. Bush-era EPA official, after the states filed their lawsuit Tuesday.

"But the legal arguments are much more granular and have to do with the specific language of certain provisions of the Clean Air Act."

Here are the states that have changed course on EPA’s handling of power sector emissions.

Colorado was a state divided during the Clean Power Plan litigation.

He joined other Democratic state attorneys in the ACE rule lawsuit this week.

The Hawkeye State defended the Clean Power Plan in court but was absent from the roster of blue states now calling for a takedown of Trump’s replacement rule.

Democratic Attorney General Tom Miller said he was bound by an agreement with Republican Gov. Kim Reynolds to secure her consent before joining a challenge to the Trump administration. Reynolds, who took office in 2017, did not agree to add Iowa to the ACE lawsuit.

Miller appeared this summer alongside other state attorneys who planned to fight the Trump rule.

"The rule fails to promote clean energy, but instead incentivizes the use of coal-fired power generation," he said in a statement. "Iowa and the U.S. cannot afford the ACE rule because it would do nothing to address climate change harms caused by carbon pollution."

"Under my watch, Michigan will not be a party to lawsuits that challenge the reasonable regulations aimed at curbing climate change and protecting against exposure to mercury and other toxic substances," she said then, referring to the Clean Power Plan case and other challenges to Obama-era air protections (E&E News PM, Jan. 22).

The Wolverine State is now part of the coalition challenging the Trump administration’s ACE rule.

Nevada’s plans for ACE litigation are not yet clear.

Under Republican leadership, the state opposed the Clean Power Plan — not as a full party to the case but as a friend of the court.

New Hampshire, a state that was once supportive of the Clean Power Plan, has so far stayed silent in the litigation over the Trump rule.

The Granite State’s Republican Attorney General Gordon MacDonald, who replaced a Democrat in 2017, did not join the ACE rule challenge this week. The governor’s seat also switched from blue to red that year.

New Hampshire is the only state involved in the Regional Greenhouse Gas Initiative, a multistate effort to curb power sector emissions that did not sign on to this week’s challenge.

"Just like its name says, the Environmental Protection Agency has a clear job: to protect our environment," Grewal said upon joining the ACE rule challenge. "But EPA’s latest rule does nothing of the kind. At a time when experts call on us to combat the threat of climate change, Washington refuses to hold the biggest polluters accountable."

Democratic state leaders in North Carolina are all-in on fighting the Trump administration’s ACE rule in court, a shift from the view of their Republican predecessors.

North Carolina was originally one of more than two dozen states that fought the Clean Power Plan in court. But after both the attorney general and governor’s offices switched from red to blue in the 2016 election, the Tar Heel State dropped its opposition to the Obama rule (Energywire, Feb. 24, 2017).

"Investing in clean energy creates jobs, enhances our energy independence and combats climate change," newly installed Democratic Attorney General Josh Stein said at the time. "The Department of Environmental Quality asked me to withdraw North Carolina’s participation in this lawsuit because it frustrates these important goals. I am glad to do so."

North Carolina is now one of several states seeking to defeat the ACE rule in court.

After staying out of the Clean Power Plan litigation, Pennsylvania is now joining the charge against the Trump rule.

"The Clean Power Plan is essential to addressing the climate change crisis and beneficial for our economy and health," said Keystone State Attorney General Josh Shapiro (D). "The Trump administration’s replacement rule does nothing to address this crisis or protect us, and it violates the Clean Air Act in the process."

Shapiro took office this year after the tumultuous ouster of Democrat Kathleen Kane, who resigned after a criminal conviction (E&E News PM, Aug. 16, 2016).

Red-turned-blue Wisconsin is part of the state coalition challenging the ACE rule. Under its previous leadership, the Badger State fought the Clean Power Plan.

According to court records, Wisconsin never formally withdrew from the Clean Power Plan challenge after Democrats Tony Evers and Josh Kaul took over this year as governor and attorney general, respectively.

State laws passed by the Republican-controlled Legislature late last year block Kaul from pulling the state out of litigation without lawmakers’ consent. But Wisconsin hasn’t signed on to briefs against the Obama-era plan since Evers and Kaul took office.

Kaul criticized the new Trump rule in a recent statement: "We need to step up now and to start responding to the climate crisis like our kids’ future depends on it — because it does."