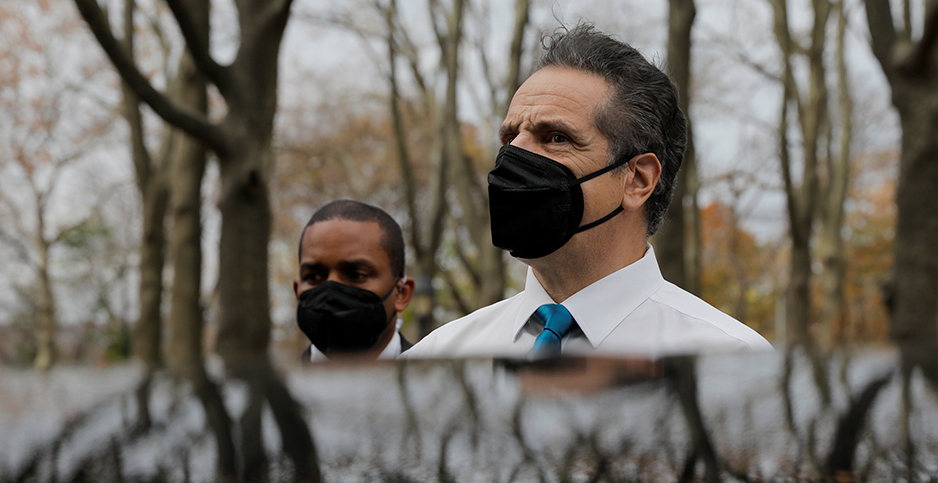 New York Gov. Andrew Cuomo (D) is among state leaders who are working on climate change. Analysts say state action will have to continue under the Biden administration to avoid the worst effects of warming. Andrew Kelly/REUTERS/Newscom

The incoming president has outlined an ambitious climate program, including plans to eliminate carbon dioxide from power plants by 2035 while pumping $2 trillion of green investments into the economy.

But Biden’s ability to act faces political constraints. The Senate will be closely divided even if Democrats win a pair of Georgia runoffs in January that would give them a narrow majority. A more conservative Supreme Court could also limit the scope of Biden’s regulatory agenda.

State action will be needed against that backdrop to drive near-term emission reductions, according to climate and clean energy analysts.

"While there will be things to do at the federal level, it is important for people to remember the rubber meets the road in the states," said Stephen Kalland, who tracks state climate policy at the North Carolina Clean Energy Technology Center. "And many of the states have good momentum that shouldn’t be overlooked or lost just because of a change of administration."

The last four years have seen an unprecedented flurry of state climate plans.

Six states passed laws to eliminate carbon emissions from power plants, and two others adopted similar measures for investor-owned utilities. A host of states moved toward phasing out hydrofluorocarbons, a powerful greenhouse gas used in refrigerants.

Yet there is considerable work to be done toward meeting state goals. Key details over how to reach climate targets in Colorado and New York have yet to be worked out. A collection of Northeastern states seeking to implement a cap-and-trade program for cars will go to governors and legislatures for approval next year. California regulators need to work out how to implement executive orders to eliminate sales of new gasoline-powered cars after 2035 and achieve net-zero emissions by 2045.

"I think people understand this is one of the few games in town, and it will be for some time," said Vicki Arroyo, who helps coordinate state policies through the Georgetown Climate Center.

Whether states will continue to forge ahead on climate policy now that Biden won the election is an open question. State action has accelerated under Republican presidents and slowed under Democratic administrations in recent decades.

Cap-and-trade programs in California and the Northeast were conceived during the George W. Bush administration, as were many states’ renewable portfolio standards. Of the 15 states with statutory greenhouse gas reduction targets, seven established them between 2007 and 2009, according to the National Conference of State Legislatures.

Climate action shifted to Washington during the Obama years, as states trained their focus on federal initiatives like Waxman-Markey, a cap-and-trade bill, and the Clean Power Plan, which sought to impose limits on power plant pollution.

Rhode Island, in 2014, was the sole state to establish greenhouse gas reduction targets in the final seven years of the Obama administration. Maryland and Minnesota passed similar measures in 2009.

"In the climate space for 20 years, we’ve seen this back-and-forth on state action linked to the likelihood of serious congressional action on the issue," said Barry Rabe, a professor at the University of Michigan who studies state climate policies.

A blue wave during this month’s elections might have prompted liberal states to take a step back, but that never unfolded. Republicans made gains in the House and prevailed in a handful of hard-fought Senate contests.

"I think the question of states remains front and center," Rabe said. "The question then becomes their ability to deliver on commitments they’ve made or pushed further."

Some greens worry state efforts could falter, especially in places where Democratic governors have encountered resistance from Republican-controlled legislatures.

That dynamic has been especially pronounced in the Upper Midwest in states like Michigan, Minnesota and Wisconsin, said Pam Kiely, who leads state policy at the Environmental Defense Fund. She urged those governors to emulate Pennsylvania Gov. Tom Wolf and Gov. Kate Brown of Oregon, Democrats who are using their regulatory authority to explore versions of a cap-and-trade program over the objections of Republican lawmakers.

The year 2010 serves as a warning about not moving ahead, Kiely said. A red wave in the midterm elections swept Democrats out of governors’ mansions across the Midwest and Mountain West, stalling state climate action until Democrats wrested back control of those governorships in 2018.

Looking ahead to 2022, Democratic governors of Colorado, Illinois, Michigan, Minnesota, New Mexico, Nevada and Wisconsin will all be up for reelection.

"The single most important thing for governors who have made concrete commitments is they have two years to step up and deliver on them," Kiely said.

Many state officials said they have no intention of slowing down. Some argued that having a supportive administration in the White House will only speed their progress.

A Biden administration could help permit large-scale renewable energy projects, either on federal lands in the West or in federal waters off the East Coast, they noted. Nominees supportive of carbon pricing plans at the Federal Energy Regulatory Commission could also advance state goals, some noted.

All expressed hope the incoming president would be able to strike a deal with Senate Republicans over infrastructure spending that would fund green priorities like electric vehicle charging stations.

The change in administration will have important implications in other aspects as well. Simply not having to fight the federal government will free up bandwidth that can be used to push state goals forward, said Basil Seggos, commissioner of the New York State Department of Environmental Conservation.

Democratic New York Gov. Andrew Cuomo "and a few others have been almost on an island talking about climate change. And now we have a powerful partner coming into the White House who can help to unify all of the energy in the country, moving in the right direction," Seggos said. "We’re energized. We view this as a chance to double down."

Of course, liberal states represent just one part of the climate equation. Conservative states rebelled against the Obama administration’s attempts to impose new emissions standards on power plants and oil wells. The same scenario is likely to unfold again under Biden, observers said.

Liberal states will have other constraints to contend with. The pandemic has decimated state budgets and will be the top priority in legislative chambers across the country.

The situation figures to be particularly acute in states like Nevada, which has seen its tourism industry collapse under the coronavirus. The Silver State boosted its renewable portfolio standard and enacted emission reduction targets in 2019, but will have its hands full with its budget this year, said state Sen. Chris Brooks, a Democrat who championed the renewable portfolio standard.

Federal permitting for renewable energy projects will be particularly important for his state because it will create jobs and tax revenues, Brooks said. Federal lands encompass about 80% of Nevada, the most of any state.

"We have a responsibility to decarbonize, and we have a huge opportunity to diversify and speed the recovery from this crisis if we’re using decarbonization as a tool," he said.

In Washington state, a pair of leading climate hawks in the Legislature are planning to advance a bill that would see the state join California’s cap-and-trade program.

State Rep. Joe Fitzgibbon (D), one of the bill’s proponents, acknowledged that other priorities will complicate the proposal’s path, but he expressed confidence it could be done.

"We can walk and chew gum at the same time. Given the potential for carbon pricing to balance the budget, it increases the likelihood of moving forward," Fitzgibbon said.

One of the first tests of state climate ambitions will be the Transportation and Climate Initiative (TCI), a cap-and-trade program for cars under consideration by 12 Northeastern states.

The program would set a cap on transportation emissions. Fuel suppliers would be required to purchase credits for the pollution they emit, with the revenue going toward projects like electric vehicle charging infrastructure. The program is modeled after the Regional Greenhouse Gas Initiative, a cap-and-trade program for power plants in the Northeast.

TCI is expected to release a final memorandum of understanding in the coming months. At that point, individual states will need to receive approval from their legislatures or governors, depending on their respective legal processes.

"I think something that is really important is that states continue to take responsibility and lead on strong actions at the state level that advance climate goals and deliver aggressive emission reduction targets," said Massachusetts Secretary for Energy and Environmental Affairs Kathleen Theoharides, who is also the TCI chair.