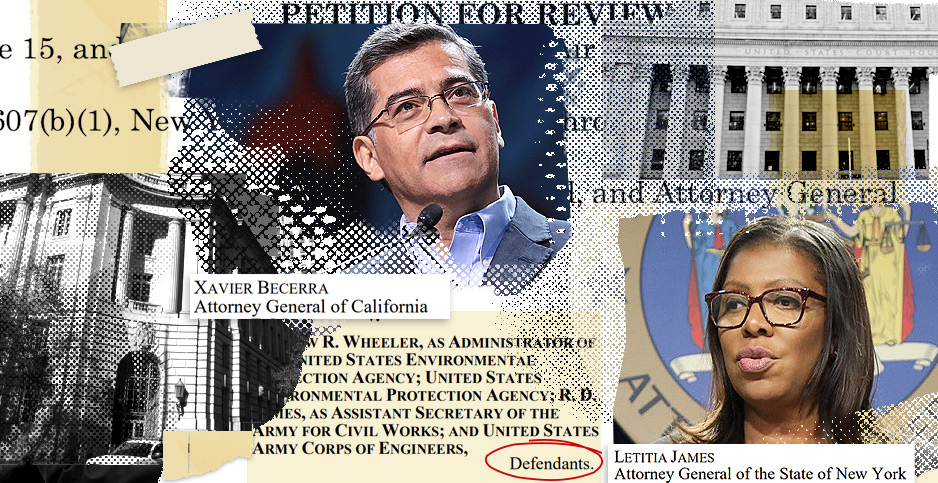 Led by New York and California, the states have challenged virtually every effort by EPA and other agencies to walk back Obama-era rules like the Clean Power Plan and Clean Water Rule.

And they are winning.

Republican attorneys general similarly sued over many rules that came out of Obama’s EPA. But the Democrats have filed significantly more lawsuits, and they have been more successful — winning 80% of the cases thus far, according to an analysis of the challenges, which often take years to work their way through the courts.

The cases often draw the support of 15 to 20 Democratically led states, and they are typically helmed by New York Attorney General Letitia James and California Attorney General Xavier Becerra.

Becerra said there are differences between the current strategy and what Republicans did during the Obama administration.

"Part of it has nothing to do with California or Democratic AGs," he told E&E News. "It has to do with an administration hellbent on taking us back to the 20th century."

The states’ "strongest allies," Becerra said, are "facts, science and the law."

The second difference: "We’re winning, and we are winning at a much better clip than Republican AGs ever did under President Obama."

Becerra has sued the administration 81 times on a wide range of issues, including immigration and health care. But more than half of the lawsuits have challenged environment and energy policies. James, who took office last year, has also spearheaded many multistate lawsuits and has pressed EPA to act on smog-forming pollution that crosses state lines.

"I am offended by the regressive policies of this administration — policies that threaten the air that we breathe, the water that all of us enjoy," James said in an interview.

Multistate lawsuits launched by Democratic attorneys general have seen an 80% win rate against the Trump administration in court, according to data compiled by Paul Nolette, an associate professor at Marquette University.

They have notched wins on issues including regulating methane emissions from landfills, ozone air standards, and key water and endangered species regulations. But they don’t always succeed; the states were rebuffed in a challenge to Trump’s 2017 "two for one" executive order that required two regulations to be nixed for every new one issued (E&E News PM, Dec. 20, 2019).

States and environmental groups also lost their challenge to EPA’s initial decision to revise the Obama-era car rules, but they are regrouping for a lawsuit over the subsequent rollback (Greenwire, Oct. 25, 2019).

By comparison, Republican attorneys general — often led by Texas — won about 60% of their cases against the Obama administration, said Nolette, the author of "Federalism on Trial: State Attorneys General and National Policymaking in Contemporary America."

Those benches generally remain friendly to environmental claims — even after three years’ worth of judicial appointments by President Trump, Nolette said.

Others noted that while Obama was far to the left on certain issues — such as regulating methane and carbon dioxide — he wasn’t as extreme as the Trump administration has been with its deregulatory agenda.

"The difference here is the Trump administration has been very, very aggressive not only in what it rolls back, but how much it has rolled back," said Mark Ryan, a former Clean Water Act attorney in EPA’s Region 10.

"There is a lot more low-hanging fruit," he said.

New York and California have long histories of progressive environmental policies, and the efforts of James and Becerra carry forward that legacy.

James, the first woman of color to serve as New York attorney general, was elected in 2018 and stepped into an office with a rich history of advocacy that began when the state led challenges of EPA’s deregulatory efforts in the 1980s, Nolette said.

The state is also often involved in Clean Air Act litigation because it is located downwind of pollution generated in the Midwest, he said.

Similarly, California has enacted more progressive policies than the federal government on a host of issues, especially air pollution.

Becerra was appointed California’s attorney general in 2017 by former Gov. Jerry Brown (D), then was elected statewide the following year. The post has been a political launching pad in the state; Brown and his father, Gov. Pat Brown (D), held the job, as has Sen. Kamala Harris (D-Calif.).

Becerra also has proved he has political chops. He’s long been considered a rising star in the Democratic Party. Before becoming attorney general, he served in the House, eventually becoming chairman of the Democratic caucus.

He was blunt when asked why the courts — and not Congress — have emerged as the primary venue to fight the Trump administration.

"Facts, science and the law still predominate in the courts," he said, "unlike in Congress."

"States have special status not only in protecting the interests of their citizens but also because they have a primary responsibility for the environment in their states," said David Hayes, a former Interior Department official during the Clinton and Obama administrations who now leads the State Energy & Environmental Impact Center at New York University School of Law.

The special standing enjoyed by states was on full display last week in a legal battle over the Trump administration’s efforts to overhaul implementation of the Endangered Species Act.

A federal court rejected a bid by government attorneys to toss the states’ case on grounds they lacked standing but asked environmental groups like the Center for Biological Diversity to do more work to demonstrate how they would be harmed by the administration’s actions (Greenwire, May 19).

For environmentalists, the increased effort by the states is a welcome development.

Others cautioned against giving the Democratic attorneys general too much credit.

"It’s important when looking at a phenomenon like that — active and coordinated work by groups of states — evenhandedly," he said.

Nolette’s data shows that, indeed, both blue and red states have been active in challenging policies from administrations of the opposing party.

But the pace has accelerated dramatically. The number of state lawsuits rose during the George W. Bush era, then ticked up again during the Obama years.

During the Trump administration, the number of lawsuits has nearly doubled.

James said the attorneys general have regular conference calls to decide who should take the lead on a particular lawsuit. Often, New York or California assumes the top slot in a multistate challenge, but other states, like Massachusetts and Washington, have taken leading roles in actions related to Endangered Species Act and National Environmental Policy Act regulations.

"When you have multiple states weighing in strongly on the same issue, it’s a force multiplier," said Hayes, who in his current role promotes litigation by states against the Trump administration.

"It’s impressive when you have some of the largest and most important states in our economy all weighing in with a single voice on matters of national importance," Hayes said.

As President Trump wraps up his term, his administration continues to churn out new federal rules.

Democratic state attorneys general say they stand ready to sue over all of those actions — particularly recent Clean Air Act rollbacks that come as the nation is gripped by the spread of a respiratory virus.

"People are dying from this pandemic, individuals with respiratory problems, and a lot of their respiratory problems are exacerbated by the air quality," said James. "To roll back all the progress that we’ve made in this nation under the previous administration is one of my reasons for my commitment to justice."

For now, though, blue states are focused on building their cases in court. New York recently spearheaded a challenge of the administration’s new definition of which waterways and wetlands are subject to Clean Water Act protections, and more lawsuits are expected as the agencies rush to lock in final rules before the end of the year.

Hayes of the State Impact Center noted that the administration’s late rollout of so many of its signature rules is due in part to states’ success in fighting early efforts to repeal or delay Obama-era rules.

"It’s been a huge victory for the AG community that we’re now at the end of the term and only now are final rules going into place," he said.

"And guess what?" Hayes said. "The AGs are right at the courthouse door to stop their replacement rules."