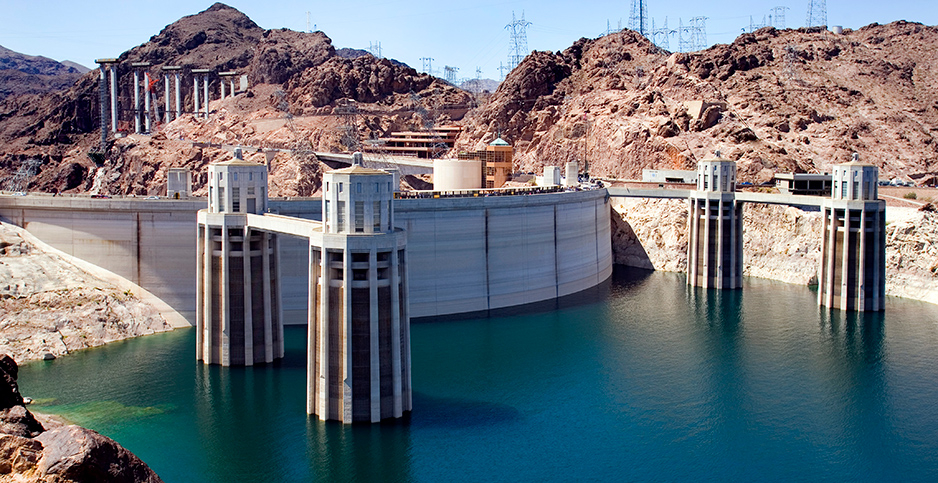 Lake Mead is seen behind the Hoover Dam. Caro/Neumann/Newscom

The Colorado River’s seven states yesterday inked agreements for managing the river in the face of climate change and increasing droughts.

Bureau of Reclamation Commissioner Brenda Burman called the day "historic" as the states met her deadline for the drought contingency plan, or DCP.

The voluntary cutbacks mean Reclamation will not move ahead with the federally imposed restrictions on the river, which provides water to 40 million people and millions of acres of farmland.

"I am pleased to see their hard work is done," Burman said on a conference call with reporters.

The DCP has been years in the making and is intended to make the river’s water supply more resilient through conservation and other measures. Despite a wet winter, the river has suffered through an unprecedented drought that has lasted nearly two decades.

"When you are looking at the possibility of a crisis on the Colorado River, we need to be able to move forward," said John Entsminger, general manager of the Southern Nevada Water Authority. "To make sure this river stays safe and sustainable for everyone."

The plan updates 2007 guidelines and outlines cutbacks that states and Mexico will take in order to maintain water levels on the river’s two primary reservoirs, Lake Powell on the Utah-Arizona border and Lake Mead on the Nevada-Arizona border. They serve as important water sources and are buffers for the states in drought years.

It also provides incentives for further conservation and would run through 2026.

But the DCP and yesterday’s signing ceremony of the seven basin states — Arizona, California, Nevada, New Mexico, Utah and Wyoming — were not without controversy. The largest single user of Colorado River water, Southern California’s Imperial Irrigation District, refused to sign on.

IID wants $200 million in federal funds for environmental mitigation at the Salton Sea, an emerging environmental and public health disaster due to a 2003 farm-to-city water transfer that has reduced inflows and caused it to recede. Its exposed lake bed emits toxic dust during the area’s frequent windstorms, posing a health risk to nearby disadvantaged communities already suffering from elevated asthma rates (Greenwire, June 20, 2016).

The district was effectively written out of the plan when the Metropolitan Water District of Southern California, the country’s largest water retailer, voted to cover its DCP water obligations if a shortage is declared.

IID board director James Hanks lambasted the signing ceremony yesterday, noting that five of his six grandchildren have asthma.

"As we gather here today on the shore of the Salton Sea, strewn with bleached bones, bird carcasses and a growing shoreline," Hanks said at a State Water Resources Control Board hearing, according to media reports, "and as Champagne is being prepared for debauched self-congratulation in Phoenix, remember this: The IID is the elephant in the room on the Colorado River as we move forward. And like the elephant, our memory and rage is long."

Peter Nelson, chairman of the Colorado River Board of California, said he regretted IID not being on board.

"In California, we would much rather move forward together as a full state," he said. "IID not joining in is a disappointment."

Entsminger, of Nevada, was more critical.

He said that "not 1 gallon less water will go into the Salton Sea as a result of the implementation of the DCP."

Entsminger’s argument was echoed by some environmental groups during the DCP negotiation process.

But IID has disputed it. The district argues that there is an extreme drought scenario where Metropolitan would come to the Imperial Valley to purchase more water to meet its DCP obligations. That, the district contends, would further reduce inflows into the lake.

The district’s concerns have also fueled debate about proposed legislation to authorize the DCP. IID and some environmental groups say it contains language that would exempt the DCP from environmental reviews (Greenwire, March 13).

The legislation is critical. Without Congress passing it, Arizona can’t join the DCP.

Entsminger yesterday sought to refute those claims, saying it was "always our idea, from day one, to make this work within existing environmental compliance."

Boxer worked on Salton Sea issues during her tenure in the Senate.

She told E&E News the language in the legislation reminds her of anti-environmental riders she encountered as chairwoman and ranking member of the Senate Environment and Public Works Committee.

"There are times when a waiver makes sense. In this case, it’s a disaster," said Boxer, who retired in 2016 after more than 20 years in the Senate. "This is a power play to be able to routinely use a waiver when it shouldn’t be used."

She added: "You are trying to make life better for people by making sure we don’t have a drought, but if the air is filthy and there is no protection, we are going to have a lot of sick people."

Two congressional hearings are scheduled on the DCP next week.