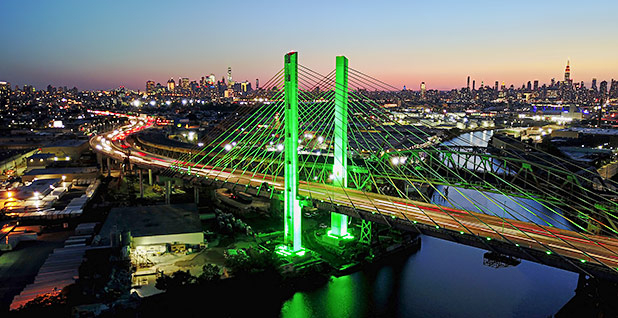 New York Gov. Andrew Cuomo (D) ordered the Kosciuszko Bridge to be lit green in support of the Paris Agreement. Several states are working together in opposition to the Trump administration's plans to exit the accord. Kevin P. Coughlin/Cuomo's office

A coalition of states determined to act aggressively to combat climate change despite President Trump’s decision to withdraw the United States from the Paris Agreement has drawn a side-eye from legal scholars who say the group risks treading on federal turf.

New York, California and Washington state launched the U.S. Climate Alliance last week following Trump’s announcement of plans to exit the climate accord and have since attracted support from nine other states and Puerto Rico. An even broader "We Are Still In" coalition formed this week, with nine states and hundreds of cities, businesses and universities pledging to meet emission-slashing targets set under the international agreement.

While backers have praised the alliances for filling a "leadership void" on climate action, some skeptics have raised eyebrows at potential legal issues with the arrangement.

The first to sound the alarm last week was Eugene Kontorovich, a Northwestern University law professor who frequently contributes to The Washington Post‘s right-leaning Volokh Conspiracy legal blog. In posts there and for the New York Daily News, the constitutional law scholar cautioned that the coalitions, depending on how they operate, could run afoul of legal limits on state action.

Kontorovich says the alliances could clash with two constitutional doctrines — foreign affairs pre-emption and the compact clause — that are designed to keep states from stepping on the federal government’s toes.

But, he added, his analysis comes with an important disclaimer: "The question mark is it all depends on what this actual rebel alliance does.

"Simply saying, ‘We think Trump is stupid, and we think his policies are stupid, and we’re going to get together and have a group where we talk about how stupid it is and how the environment is good,’ would not be enough," he said.

Many say the U.S. Climate Alliance and similar efforts are in the clear for that reason.

"These general, unsigned press releases stating an affiliation with one or more foreign causes, it gets a little bit harder to say they’re engaged in unconstitutional behavior," said Duncan Hollis, an international law professor and associate dean at Temple Law School.

"None of these state agreements that we’re seeing emerge are mandatory," he said. "In each case, they’re just matters of voluntary cooperation."

As a general rule, Kontorovich said, the more aggressive a state coalition becomes, the more likely it is to run afoul of constitutional limits on its power.

Under the constitutional doctrine known as foreign affairs pre-emption, he noted, courts have sometimes struck down otherwise valid state laws that are in tension with the foreign affairs policy of the United States.

If state climate alliances raise constitutional questions under the foreign affairs pre-emption doctrine or compacts clause — a big if — legal challenges could still face an uncertain path in the courtroom, experts say.

Constitutional law scholar Eugene Kontorovich, a law professor at Northwestern University, argues that major action by a coalition of states may well run afoul of the Constitution, but the likelihood of a successful lawsuit would depend on the cost of that action.

"If they impose regulations on businesses in the name of this policy, then not only would it be a binding measure that has legal effect that can be challenged, but there would also obviously be parties with standing to challenge it because private parties can raise this federal pre-emption issue to knock out state regulation," he said.

Business or trade groups would likely rise to the occasion, he said.

Temple Law School professor Duncan Hollis noted, however, that more fundamental obstacles to legal standing may exist. Most importantly, he said, the fact that the United States will need four years to formally withdraw from the Paris Agreement means any pre-emption claims against state action may have to wait.

In other words, if a state coalition took action that some party considered an overreach, the coalition could counter that the action is not legally contrary to federal policy until the U.S.’s Paris withdrawal is complete.

"I don’t see a federalism problem until 2020," he said. "We’re in a four-year window where I don’t know that the constitutional issues are yet ripe."

In 2000, for example, the Supreme Court struck down a Massachusetts law that banned state agencies from buying goods from companies doing business with Myanmar. The court ruled that the state’s action was pre-empted by the U.S. government, which established federal sanctions on the Southeast Asian nation. The high court tossed a California insurance law on similar grounds three years later.

Kontorovich disagrees with the cases and said foreign affairs pre-emption can be "a bit erratic in its application," but warned that states could find themselves in hot water if their work conflicts with the Trump administration’s policies.

"They’re saying, ‘The federal government had this treaty, and they’re not going to implement the treaty,’" he said, describing the states’ approach. "’So we want to do it instead. So, listen, countries of the world, we’re going to fulfill this obligation.’ That makes it a matter of foreign affairs."

Hollis, the Temple professor, noted that it’s unclear whether the current Supreme Court justices would follow the approach taken in the Massachusetts and California cases.

A second potential angle for a challenge to a state climate coalition, Kontorovich said, lies in the Constitution’s compact clause, which sets limits on states’ ability to enter into formal compacts with one another or with foreign powers without congressional consent.

Then-California Gov. Arnold Schwarzenegger (R) faced some academic scrutiny under the compact clause in 2006 when he announced an agreement with British Prime Minister Tony Blair to collaborate on market-based solutions to climate change. His office maintained that the effort was a permissible information-sharing agreement.

Compact law expert Jeff Litwak, an adjunct professor at Lewis and Clark Law School, said courts have typically been highly deferential on such questions, finding that "the Constitution doesn’t really limit the creativity that states have in developing ways of cooperating with each other."

He noted that states routinely work together on substantive issues without creating formal compacts, which involve binding contracts between states. If the U.S. Climate Alliance states opted to create a formal compact, they would need congressional consent if the group’s actions affected the supremacy of the federal government or disadvantaged non-member states.

But so long as they steer clear of compact status, Litwak said, they will avoid constitutional questions under the compact clause.

"If they really want to take over federal policy, they obviously cannot negotiate directly with foreign nations — that requires consent," he said. "But there’s no reason that they can’t just voluntarily step up to the plate and say, ‘We are going to cap our gases, and we’re going to do it even though the federal government might not do it.’

"The devil’s going to be in the details there."

In the days since the state coalitions formed, details of how they will operate remain hazy.

A spokeswoman for Washington Gov. Jay Inslee (D) yesterday told E&E News "it is too early to weigh in on" constitutional questions because the U.S. Climate Alliance "is working to establish its operational model."

In a news conference, an adviser to former New York Mayor Michael Bloomberg noted that the "We Are Still In" coalition does not intend to submit formal pledges to the United Nations and will instead develop a "societal nationally determined contribution" (Greenwire, June 6).

Gerrard, of the Columbia Law School, said he expects states involved in the coalitions to be mindful of potential limits on their powers — both to avoid constitutional challenges and to maintain their own independence and flexibility to set policy within their borders.

"I just can’t imagine that California or New York state or anybody is going to sign something that allows France or whoever to go to court to compel them to do anything," he said. "That’s just not going to happen. I don’t see that as a plausible scenario."

That hasn’t stopped Paris supporters from using lofty language to describe their efforts. Kontorovich noted that the message of the "We Are Still In" moniker is particularly problematic, as it suggests the members are actually party to the Paris Agreement.

Individual political leaders, too, have taken a bold approach. A press release from the office of Washington, D.C., Mayor Muriel Bowser, for example, announced an executive order "binding the District to the Paris Climate Accord."

"When they actually start to say, ‘We want to bind ourselves to it,’ I do think that’s where you wonder if they’ve actually talked to the State Department or actually really lawyered the issues," said Hollis, the Temple professor. "Because I do think there are questions about how much they can bind themselves.

"But," he added, "I’m not seeing states sitting down at a negotiating table with France or the U.K. signing on to anything. When you actually start to see signed agreements, then you really do start to wonder, are we testing the limits of this compact clause?"

University of Colorado Law School professor Mark Squillace said states would be better off focusing on policy over bluster.

"I understand the sentiments and where they’re coming from on this stuff — and I guess I’m sympathetic somewhat — but it’s a little bit extreme to be talking about actually joining the Paris Agreement or that kind of thing," he said.

"Better that we take the commitment that the United States made seriously and each do our part," he said. "But I don’t think it goes much beyond that."

Kontorovich argued that with the constitutional limits on what the coalitions can do, they are left offering empty promises.