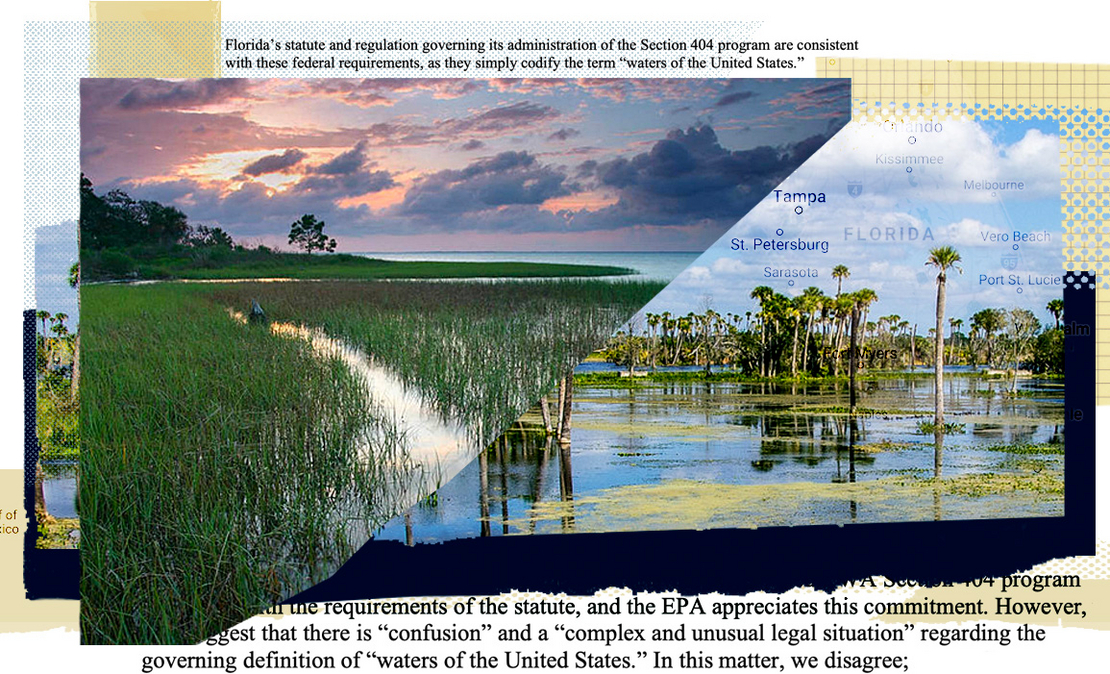 States are increasingly considering taking over the federal government’s job of overseeing wetlands and water permitting under the Clean Water Act as they seek to expedite mining projects, worrying environmentalists who say the maneuver will leave them with fewer ways to intervene against developments they oppose.

Under the Clean Water Act, states or tribes can seek to take over permitting and administering the Section 404 program for dredging and filling federally protected waters. Before approving such a request, EPA must determine if a state has a sufficient program to implement and enforce federal 404 permitting.

To date, Florida, Michigan and New Jersey are the only states with the power to oversee permitting activities, but more are considering lining up to apply.

The Army Corps of Engineers retains permitting authority throughout the rest of the country, and EPA reserves the power to veto those permits.

Mark Ryan, a former Clean Water Act attorney for EPA Region 10, said the statute is set up to allow states to assume oversight of 404 permitting if they show they can do so, but it’s a time-consuming and challenging job. And while states must meet the minimum requirements of the Clean Water Act and EPA has oversight, Ryan said the federal agency has limited resources to do oversight and its hands are often tied.

“In a perfect world, I would say, ‘Give it to them,’ because the corps and EPA will have oversight,” Ryan said. “In the real world, what’s likely to happen is states like Alaska and Florida, which are run by Republican, pro-business administrations, will likely allow more projects than maybe the EPA and corps would have.”

The first test case of a state moving a mine forward on its own is playing out in Florida, where the state’s oversight and use of a now-defunct Trump-era Clean Water Act rule is fueling a clash with EPA (Greenwire, Feb. 4).

Troyer Brothers, a family-owned potato company out of Fort Myers, Fla., is asking the state for permission to build a limestone mine in Lee County east of Fort Myers, as well as a processing and ancillary operation, that environmental advocates say is in essential habitat for endangered panthers.

Late last year, EPA in a letter to Florida’s Department of Environmental Protection objected to the the state’s notice seeking public input on a dredge-and-fill permit for the proposed 781-acre mine. EPA at the time cited insufficient information and concern with the state’s reliance on the Navigable Waters Protection Rule, which pulled back federal protection for millions of miles of streams and wetlands. EPA has since moved to formally revoke the Trump-era rule. The agency is currently using pre-2015 regulations and is working to recraft the definition of WOTUS even as the Supreme Court takes up a precedent-setting case on the matter (Greenwire, Jan. 31).

When asked about its use of the Trump-era rule, the Florida DEP reiterated that it has months to make changes under federal regulations in the wake of EPA’s reverting to pre-2015 regulations. “DEP will continue to abide by the timelines provided by law absent the U.S. EPA providing reasoned analysis or controlling authority to the contrary,” said Alexandra Kuchta, a spokesperson for the Florida DEP.

The state, Kuchta said, has not yet issued a 404 permit for the Troyer Brothers proposed mine and is waiting for the applicant to provide more information to address EPA’s concerns. “The EPA objection was based on the delineation of WOTUS and said that if the objection was not resolved by 90 days from the end of their comment period [May 4, 2022], then processing of the permit application would transfer to the U.S. Army Corps of Engineers,” said Kuchta.

Since taking over the federal government’s job of processing water and wetland permits more than a year ago, the state agency has received 4,105 applications and issued 373 general permits and 75 individual permits, said Kuchta. Almost 370 projects received letters saying no permit was required, 42 were denied, more than 1,244 applications were withdrawn, and about 2,000 are currently pending, she said.

A spokesperson for Troyer Brothers said the company went through a “highly regulated and strict process,” earned numerous state and federal approvals, and is currently reviewing a notice it received from EPA. The spokesperson also noted that the proposal includes the creation of three wildlife corridors and conservation easements.

Environmental groups are calling for EPA to intervene, arguing that the mine would sit in prime panther habitat, sever the flow of water and that agencies like the Fish and Wildlife Service have yet to weigh in. They also say the project had previously been flagged by the Army Corps as needing a deep environmental review under the National Environmental Policy Act.

Amber Crooks, environmental policy manager for the Conservancy of Southwest Florida, said the limestone mine is just one of a handful of projects seeking approval from the state that could, all told, result in 600 acres of wetlands being destroyed and 9,500 acres of panther habitat being affected.

“Once the land is destroyed and carted off for profit, it cannot be utilized by the panther,” she told federal and state regulators in a Dec. 3, 2021, letter. “The mine pit not only destroys panther habitat, but fragments the remaining habitat areas.”

In Alaska, Gov. Mike Dunleavy (R) has said he’s preparing to ask his state Legislature to join the other states assuming oversight of permitting under the Clean Water Act in an attempt to attract mining projects.

Alaska first began seeking primacy in 2013, but a budget crunch led the state to halt work on the effort given the administrative costs it would have required.

In December, the state decided it was time to stop waiting on its primacy dream deferred. E&E News reported last year that Dunleavy announced the primacy request during a keynote speech at the American Exploration & Mining Association’s annual conference in Reno, Nev. (Greenwire, Dec. 10, 2021).

Days after those remarks, Dunleavy requested almost $5 million from the state Legislature in his 2023 fiscal budget to pay for building the state permitting program, which a press release from his office classified as being for “resource development.”

Jason Brune, head of Alaska’s Department of Environmental Conservation, told E&E News in December that he was one of the people within the Dunleavy administration who recommended the state proceed with a request for primacy under Section 404.

Brune said the state is in the midst of trying to sell itself to investors and mining companies as a future jurisdiction as the world economy tries to move away from oil and gas, a key part of the Alaskan economy.

There are six active mines in the state, “but the geological potential is huge,” Brune said.

“I thought this would be a good return on investment for the state, and there’s no doubt it could be,” Brune said.

For years, the threat of a rare EPA veto under Section 404 hovered over the controversial Pebble gold-copper mining project. Earlier this year, the Biden administration reiterated it is proceeding with proposing a veto against Pebble.

Dunleavy’s nomination of Brune to the department was opposed by environmentalists in the state who believed he was beholden to corporate interests, including his former clients. Brune told E&E News that a decision to proceed with 404 primacy had nothing to do with Pebble and said the project would be unaffected by such a move.

He said that he sold all of his stock in the mining sector before taking his position with Dunleavy and abides by all required ethics standards.

He did acknowledge that obtaining Section 404 primacy was about “more development” in Alaska “period,” and if “that expedites processes” for Alaskan mines, “that’s an added benefit.”

Alaska’s push to take over federal permitting occurs as Dunleavy pushes back on EPA’s new definition of WOTUS, which the governor blasted as “excessive” in a press release on Friday before vowing to “stand up for the rights of Alaska and for Alaskan property owners.”

‘Devil’s always in the details’

Some activists in Alaska are worried that the move could lead to mines being approved by the state that shouldn’t be built.

Tim Bristol, executive director of fisheries conservation for the nonprofit SalmonState, told E&E News that the reason federal laws like the Clean Water Act exist is to make sure mines aren’t built in areas where they could harm species or the environment.

“Is it an acid mine waste-generating deposit that’s in or around critical salmon habitat, or hunting areas, or customary traditional use areas for Alaskan Natives?” Bristol said. “The devil’s always in the details, and that’s why you always want to have those checks and balances.”

A spokesperson for Dunleavy did not immediately respond to a request for comment.

Water issues can be a difficult nut to crack for mining companies, which typically need permits for dredging and filling due to moving earth to extract raw minerals.

The length of time needed to obtain Clean Water Act permits, including under Section 404, can drag out the time necessary to develop a mine in the United States.

A 2016 report from the Government Accountability Office found the time needed for the Bureau of Land Management and the Forest Service to approve a mine can range wildly, from about one month to over 11 years.

Agency officials attributed this to “difficulties mine operators may face, such as obtaining other required federal and state permits,” the report stated, noting the 404 program as one example of an added layer of permitting sometimes required.

To conservationists trying to protect wild and fragile spaces, this timeline can be a good thing.

However, climate action complicates the benefits of waiting on mine permits, because experts say a drastic increase in mining lithium, nickel, copper and other minerals will be needed to produce the products required for a transition away from fossil fuels.

Brian Menell, CEO of mining company TechMet, told E&E News that, at this point, current environmental laws are “inhibitive” to U.S. mining projects, making it impossible for the nation to rely on its own minerals to build a zero-carbon economy.

“It’s just not possible,” Menell told E&E News. “Increasingly, people who are in favor of climate change mitigation will realize you need to get the minerals to mitigate climate change.”

The National Mining Association, a leading U.S. mining industry group, believes that “with the right resources, the states could work through the process more efficiently than the overburdened Corps of Engineers,” spokesperson Conor Bernstein said in an email.

“And with demand for minerals and metals needed for the energy transition and EV revolution soaring, we should be working to find efficiencies in the mine permitting process wherever we can,” Bernstein said.