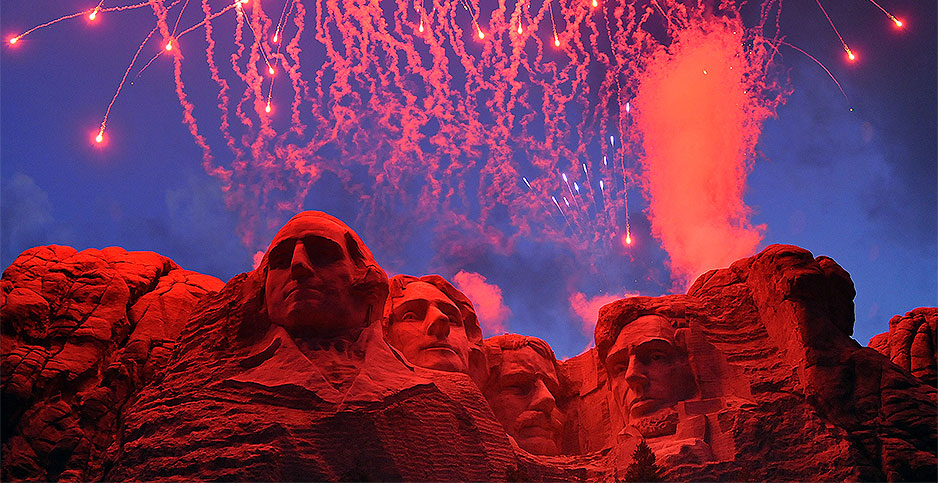 But officials are braced for a crowd of 7,500, including President Trump, who urged the National Park Service to allow the fireworks to return to Mount Rushmore for the first time in a decade (Greenwire, Jan. 16).

"We told those folks that have concerns that they can stay home," Noem, a Trump ally, said in an interview with Fox News. "But those who want to come and join us, we’ll be giving out free face masks, if they choose to wear one. But we won’t be social distancing."

Officials hope the public will follow a different set of rules when Trump returns to Washington for a second fireworks show Saturday, part of his 2020 "Salute to America," which will include a military air show above the National Mall.

"Practice social or physical distancing, staying at least six feet away from others who are not a member of your household," the Interior Department said in a statement yesterday.

The department said it also would distribute a supply of more than 300,000 cloth face coverings to attendees on the National Mall.

Noem and Interior officials aren’t the only ones offering conflicting advice on how to slow the spread of the novel coronavirus.

With the number of COVID-19 cases in the United States now growing by more than 50,000 per day, Trump added to the confusion yesterday, saying, "I’m all for masks." Earlier he ridiculed them as a symbol of political correctness.

Tribal officials have led the opposition to the fireworks at Mount Rushmore.

"Nothing stands as a greater reminder to the Great Sioux Nation of a country that cannot keep a promise or treaty than the faces carved into our sacred land on what the United States calls Mount Rushmore," Cheyenne River Sioux Tribal Chairman Harold Frazier said this week. "We are now being forced to witness the lashing of our land with pomp, arrogance and fire, hoping our sacred lands will survive."

Event organizers said that space at Mount Rushmore was so tight that they had to limit the number of journalists who could cover it. The 7,500 people who received tickets will be ushered into two seating areas: A group of about 3,000 will watch from an amphitheater and viewing decks near the base of the monument, while the rest will have to bring lawn chairs to watch the fireworks from a gravel parking lot.

Benjamin Aaker, president of the South Dakota State Medical Association, said events like the Mount Rushmore fireworks don’t just pose a risk to people who attend. The health of the entire community could be threatened if people catch the virus at the event and then spread it at their homes and workplaces, he said.

"If we continue to have these events, we worry that it’s going to be a much more significant outbreak," Aaker said.

But Noem, who has worked closely with Interior and NPS officials on planning the Mount Rushmore fireworks, said South Dakota officials want visitors "to focus on personal responsibility."

"Every one of them has the opportunity to make a decision that they’re comfortable with," Noem told Fox News host Laura Ingraham. "So, we will be having celebrations of American independence."

The pandemic isn’t the only thing that has some locals concerned. Several former officials who oversaw the wildfire danger at Mount Rushmore have spoken out. Fireworks displays were canceled after 2009 because a mountain pine beetle infestation had dried out trees near the memorial and in the national forest that surrounds it (Greenwire, April 2).

"Some people are very excited about it, they were sad to see the fireworks end," said Cheryl Schreier, who retired as the Mount Rushmore superintendent last year. "But the people who truly understand the preservation and protection understand that this is not a good idea to light fireworks in the middle of a forest."

Event organizers are monitoring the fire conditions and will decide tomorrow whether the fireworks would be safe. The National Park Service has also carried out controlled fires in the memorial grounds to burn off dry material. Organizers are working with a "Go/No Go" checklist, but NPS has not released the checklist, citing security concerns.

Fury said that it’s rained in the region in recent days, adding, "The team on the ground is feeling good about our ability to put on a safe and celebratory event."

Meanwhile, the Interior Department said the "Salute to America" on Saturday will feature 10,000 fireworks in a 35-minute display.

Interior said the event will include "multiple flight demonstrations from different branches of our military, in particular the U.S. Air Force Thunderbirds and the U.S. Navy Blue Angels, and a monumental firework display."

Many Democrats on Capitol Hill urged Trump to cancel this year’s "Salute to America" after the 2019 event cost taxpayers more than $13 million, twice the cost of Fourth of July events on the National Mall in previous years (E&E News PM, June 25).

In a statement, Interior Secretary David Bernhardt described the event on the South Lawn of the White House and the Ellipse as a patriotic tribute to members of the military, with the Department of Defense "providing a one-of-a-kind air show." It will begin at 6:45 p.m. and end at 8 p.m.

"An incredible fireworks display will follow that promises to be the largest in recent memory," Bernhardt said.

The fireworks will be launched from a stretch more than a mile long, from Inlet Bridge at the south end of West Potomac Park to north of the Lincoln Memorial and on the grounds of the Washington Monument.