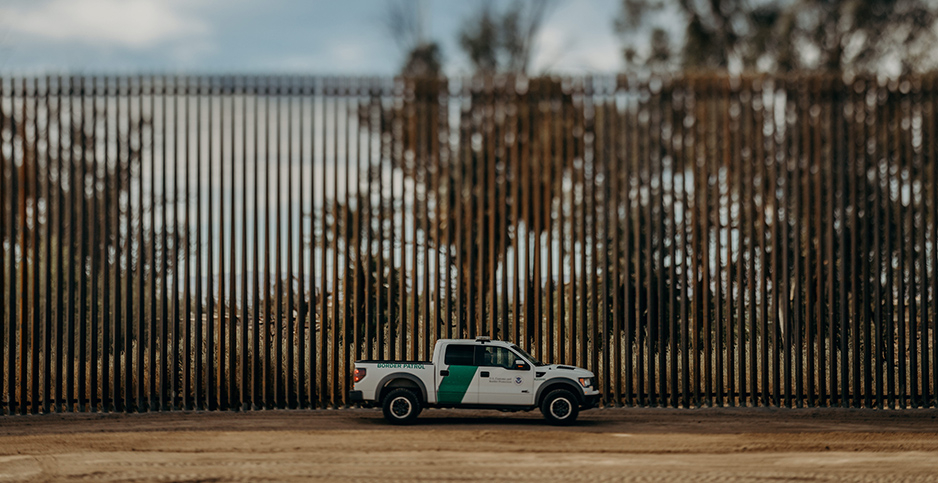 In Calexico, Calif., the Department of Homeland Security is building a 30-foot steel bollard wall on the border with Mexico. U.S. Customs and Border Protection/Polaris/Newscom

President Trump’s proposed border wall has generated plenty of controversy, but his idea to switch its construction material from concrete to steel may have triggered another conflict — this one over climate change.

At issue is the question of carbon emissions, specifically which material contributes more to global warming: steel or concrete.

It’s a debate that goes far beyond the border wall, which Trump trumpeted again in last night’s prime-time address.

Jeremy Gregory, who serves as executive director of the Concrete Sustainability Hub at the Massachusetts Institute of Technology, said engineers and architects often wrestle with the question of which material to use. The size of the carbon footprint typically depends on the way concrete and steel are incorporated.

"It just always depends on those designs," Gregory said. "That’s probably why we see them both used."

By way of comparison, Gregory pointed to a study he worked on that tried to settle an age-old debate: Which bathroom tool is better for the environment, paper towels or hand dryers?

To try to solve that mystery, Gregory said he first had to figure out what constituted properly dried hands. Or, in engineering terms, its functional unit.

In that same fashion, Gregory said it would be difficult to compare the carbon footprint of a steel wall versus a concrete one without a clear understanding of what would constitute its success in terms of border security.

"What is your functional unit when you’re doing a border wall?" he asked. "That’s where the design part comes into it."

(For the record, Gregory said a fast-acting hand dryer is the best bathroom option for the environment).

Trump has been anything but consistent on his vision for the wall, even as the idea has turned into the defining issue of his presidency.

Over the years, he’s floated all kinds of ideas — from a concrete barrier to a see-through design to a wall adorned with solar panels.

But recently his administration has shifted toward one constructed of steel. This week his team asked congressional leaders for $5.7 billion in funding for a "steel barrier." The aim is to have a "new physical barrier" that would cover more than 230 miles at the Southwest border.

Trump has touted the steel option, too.

"We’ll build a steel barrier. Steel. It will be made of steel. It will be less obtrusive, and it will be stronger," he recently told reporters. "They don’t like concrete, so we’ll give them steel. Steel is fine. Steel is actually … more expensive than concrete, but it will look beautiful and it’s very strong. It’s actually stronger."

The wall fight has led to a partial government shutdown that’s lasted for more than two weeks and has prompted speculation that Trump would use an emergency declaration to build it.

As for the steel-versus-concrete debate, one analyst recently made the case that a steel wall would produce significantly more carbon emissions than a barrier made of concrete.

"A reinforced concrete wall would result in 6.2 million [kilograms] of CO2 emitted per mile of wall built, just for the manufacturing of the materials in the wall (the concrete and the steel rebar reinforcements inside the concrete)," Jeffrey Rissman, industry program director and head of modeling of Energy Innovation, a California firm that analyzes climate policies, wrote in an email to E&E News.

A steel wall, meanwhile, would produce more than 10 times as much carbon dioxide.

"A wall built of steel slats with gaps in between and a concrete foundation would result in 75 million kg of CO2 emitted per mile built, again just for the manufacturing of the materials in the wall," wrote Rissman.

Put another way, building 1 mile of a steel wall would be equal to "driving 183 million miles in an average passenger car," he noted.

Rissman said he based his calculations on a 2017 government request for border wall prototypes.

Not everyone agrees, however, that steel would be worse than cement for the climate.

"It seems logical to assume that the concrete wall would have a significantly higher carbon footprint," said Robert Phinney, director of sustainable design at Page, an architecture and engineering firm. "Between the unit-based increase of concrete over steel and the fact you would need more volume of concrete than steel for the same wall performance, I can’t see it being a close call."

What is indisputable is that both steel and cement have a significant impact on U.S. carbon emissions.

According to EPA’s Greenhouse Gas Reporting Program, the production of iron and steel in 2017 was by far the largest emitter of carbon in the U.S. metals sector, with about 72.6 million metric tons in emissions.

A similar case holds true for concrete in the U.S. minerals sector. Cement production accounted for more than half of carbon emissions by that industry in 2017, with about 66.8 million metric tons.

For its part, the cement industry has taken some small steps to address the problem. Last year, the World Cement Association held its first-ever forum on global warming — a recognition that the industry is responsible for about 7 percent of all global carbon emissions, according to one estimate (Climatewire, July 9, 2018).

More needs to be done, however, if the United States and the world want to lessen the impact of global warming.

A new report out yesterday by the Rhodium Group estimated that energy-related U.S. carbon emissions increased by 3.4 percent in 2018 (see related story).

"That’s the second largest annual gain since 1996 — surpassed only by the 3.6 percent increase that occurred in 2010, when emissions rebounded from a recession-driven 7.2 percent decline the year before," according to the report.