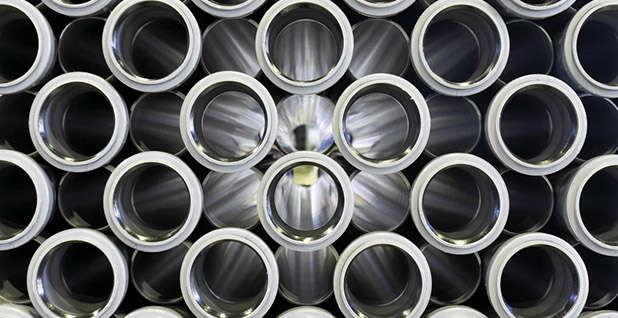 Comments at CERAWeek by IHS Markit yesterday provided a glimpse into the complicated relationship the energy industry and its free-market allies have with President Trump, who suggested steel and aluminum tariffs last week. Jatinsanghvi/Wikimedia Commons

HOUSTON — Sen. Dan Sullivan (R-Alaska) was here yesterday to spread optimism about American energy, but he couldn’t escape questions about the implications of steel tariffs.

His answer: The Trump administration’s tariff proposal could make it harder for the United States to manage the economic and strategic challenges presented by the rise of China.

Sullivan said he’s reached out to senators and administration officials. The issue is how to address overcapacity of the steel industry that is driven by production in China, he said.

"To me, the most important way in which we deal with that is having close alignment with our like-minded allies," Sullivan told reporters. Instead, he worries the tariff plan is in some ways "having the opposite impact."

Sullivan spoke during the opening day of CERAWeek by IHS Markit, the prominent energy conference held annually in Houston. Comments yesterday provided a window into the complicated relationship the oil and gas industry and its free-market allies have with President Trump, who suggested last week that steel and aluminum tariffs are on the way (Energywire, March 2). Daniel Yergin, CERAWeek’s main host, said Friday that the oil industry and American business generally have "a mixed view" of the administration’s policies.

Yergin made sure to ask Sullivan and CEO Greg Armstrong of Plains All American Pipeline LP about tariffs and a debate over the North American Free Trade Agreement (NAFTA) during a session here yesterday on North American energy infrastructure.

Armstrong said "some form of NAFTA" is needed from an energy perspective, though he said an update probably is warranted. The CEO said his company has been examining possible tariffs because it has about $1.5 billion of projects underway that use quite a bit of steel. He described ways the company could be affected.

Armstrong said the issue is "thornier" than headlines suggest after declaring: "We’ll survive no matter what."

Sullivan said an effort to modernize NAFTA may provide opportunities, noting how different the American energy sector was 25 years ago.

"To update this agreement in a way that really promotes the North American continent to be really in some ways the world’s next energy superpower, it provides enormous" opportunities, he said.

During a media availability in Washington yesterday, Trump was asked about House Speaker Paul Ryan’s (R-Wis.) worry about a trade war and whether he would back down on tariffs.

"No, we’re not backing down," the president said. He also suggested tariffs could be part of a renegotiation of NAFTA and said he didn’t expect a trade war.

The American Petroleum Institute has pushed to keep NAFTA intact, and it has historically favored free trade and opposed tariffs.

Like a lot of observers, the trade group is trying to analyze the tariff proposal and keep up with the administration’s approaches, Dean Foreman, API’s chief economist, said yesterday in an interview.

"It’s premature to raise a red flag on this," he said. "We’ll hope that cooler heads prevail."

Sullivan took time in Houston to promote Alaska’s energy potential yesterday, from possible development in the Arctic National Wildlife Refuge to work toward liquefied natural gas exports. He acknowledged "chaos" in Washington to a crowd here but suggested getting past daily headlines and tweets.

The senator touted tax reform that he thinks will help spur energy investments and a federal government that sees opportunity and jobs from U.S. energy. He is an advocate of legislation that could shorten timelines in permitting infrastructure.

"There has never been a more exciting time for the American energy sector," Sullivan said.

While he appreciates the administration’s focus on the steel issue, Sullivan said the approach right now seems to be splitting allies. Many details were missing in the original announcement, he told reporters, and some in the administration seemed caught off guard.

The senator said the United States will need allies working with it given the long-term economic challenge that China poses.

"That’s the way I would approach this," Sullivan said.