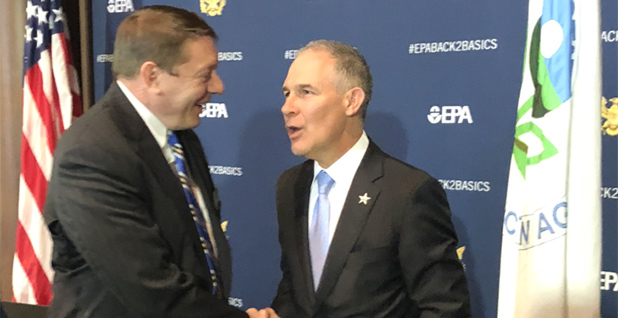 There’s a growing body of science showing that humans are threatened by all three. Policymakers have spent years crafting public health protections based on that research.

The former securities lawyer and Trump EPA transition official has held significant sway over some of the agency’s major policy moves under Administrator Scott Pruitt.

There is a mountain of science that says he’s wrong. The chemicals, drugs and environmental impacts that Milloy says are demonized by politically motivated scientists and their allies all pose health risks to humans.

Milloy won’t have it.

He’s spent his career attacking the science used by government agencies to protect the public. As a result, he’s among a distrustful minority of critics who refuse to accept mainstream research, or most of it. He’s been taking discredited positions for two decades. And he’s done it gladly.

Now, he’s having his brightest moment in President Trump’s America.

"The left has tried to make me radioactive for 25 years now, but I have defied them successfully and I’ve come out on top, and that is so empowering you can’t believe it," Milloy said in an interview. "They’ve said just about every nasty thing they can say about me, and somehow, by hook or by crook, I have made it through and I’m winning."

Two years ago, Milloy’s claims didn’t resonate in broader Washington. His book "Scare Pollution: Why and How to Fix the EPA" was regarded by policymakers as, essentially, the bizarre complaints of a man shouting at the clouds, a crank who opposed any and all regulations. He was a blogger who ran JunkScience.com, with the tagline "All the Junk That’s Fit to Debunk."

So for years, Milloy, a veteran of some of the most conservative think tanks in Washington and a former executive at the Murray Energy Corp. coal company, had no real influence at EPA. Instead, the agency served as a useful target of his ire.

Then Trump was elected.

With Pruitt expressing empathy toward industry, Milloy has helped muster some major changes at EPA. He’s largely unknown to the public, a symptom, perhaps, of toiling for years in obscurity. A number of Milloy’s friends, who are fellow critics of established climate and air pollution science, are members of EPA’s Science Advisory Board. Some of them are researchers funded by the fossil fuel industry.

His daily Twitter feed is a mix of attacks on communism, liberals and "climate bedwetters." He also posts frequent exclamations of triumph.

Trump rolls back a policy by President Obama that sought to reduce greenhouse gas emissions. "WINNING!!" Milloy writes. A judge lifts a ban on coal exports at a port in Oakland, Calif. "WINNING!!" Pruitt will get "Secret Science" out of EPA. Very "YUGE WINNING!!"

In the past, Milloy was a hired crusader helping companies and think tanks fight against regulations and public health protections. Members of industry and conservative think tanks have helped pay Milloy’s salary for decades. He wouldn’t disclose who his funders are in a recent interview, allowing only that they include "private foundations."

In April, Milloy was in the audience at EPA headquarters when Pruitt proposed a rule that would restrict some types of science that the agency can use to craft regulations. A smile beamed across this face. Major science organizations point out that the rule would exclude some of the most important air pollution studies ever conducted, because they use data that are unavailable to the public.

Milloy celebrated with Marc Morano, who tweets under the moniker @ClimateDepot and works for the conservative Committee for a Constructive Tomorrow. They were in the Rachel Carson Green Room, named after the famed environmentalist, who Milloy said "misrepresented the existing science on bird reproduction and was wrong about DDT causing cancer."

The symbolism of the moment was not lost on Milloy.

He tweeted: "Climate skeptic barbarians @junkscience and @climatedepot. Not just at the EPA’s gate, but inside the administrator’s office eating the greens’ lunch."

One policy expert who opposes Milloy’s positions said it was stunning to see him shaking the hand of the EPA administrator. He described Milloy as having a Cheshire cat grin and expressed personal repugnance that he was celebrated at EPA headquarters. The expert, who didn’t want to go on the record in a story that could be interpreted as praising Milloy’s ascendance, expressed grudging admiration for Milloy’s persistence. He took unpopular, contrarian views for decades before finally finding a moment of influence.

Milloy’s policy goals are indeed a long game, and they stretch back to his time fighting science on behalf of tobacco companies. After the scientific body of evidence showing the health risks of smoking became overwhelming, the industry shifted to attacking the way studies could be used. Milloy headed the Advancement of Sound Science Coalition, a group funded by Philip Morris International Inc. and other cigarette companies that attacked scientific studies on the health risks of secondhand smoke.

The presence of people like Milloy shuts out the voices of qualified scientists in the public policy arena, said Augusta Wilson, an attorney with the Climate Science Legal Defense Fund.

"What it means is that the policies that get developed are ultimately going to reflect the interests of industry, the tobacco industry, the oil and gas industry and others, rather than a real, fundamental focus on human health and the environment, which is what should be happening and which is the agency’s core mission," she said.

In the Washington policy world, you’re up or you’re down depending on who’s in the White House. But Milloy said he has never seen himself as being on the outs, just traveling a learning curve that has led to now. He said this is the time for people like him, who viewed the George W. Bush administrations as a failure because it didn’t go after environmental issues aggressively enough, letting bureaucrats settle policy goals.

Milloy, who has a master’s degree in biostatistics from Johns Hopkins University and a law degree from the University of Baltimore, has a resume rich with affiliations at conservative think tanks that oppose environmental regulations. They include the Cato Institute, Energy and Environment Legal Institute, Heartland Institute and Competitive Enterprise Institute. Many of those groups hold sway at Pruitt’s EPA, making it seem as if Milloy’s career has been building to this moment.

Milloy said it won’t be easy to strip his imprint from EPA, even if the next administration goes after Pruitt’s so-called science transparency plan. Democrats are going to have to fight the "politics of backsliding on these issues," he said.

"These are years they’re not getting back," Milloy said.

Others question whether Milloy has any real sway at EPA and whether anything he has influenced has any durability. All of Milloy’s attempts to subvert science are legally vulnerable because they’re so far outside of established research, said John Walke, a former EPA air attorney and director of clean air, climate and energy at the Natural Resources Defense Council.

"It’s really hard to overstate how much of an outlier and irrelevant he’s been in environmental and public health policy debates over the past three decades," Walke said. "He has always been on the losing side of the public health debates, promoting the interests of the tobacco companies and oil companies and dirty freight truck companies. There’s this subculture of industry and untrained scientists who try to pick apart consensus science to fend off regulation for as long as possible, well past its expiration date."

When asked to provide the names of some allies, Milloy hesitated. He said he thrives on the explosions of emotion he is capable of producing in his critics and doesn’t need external validation.

"I don’t even know that I’m representative of anything, because I’m the only person I know that has been doing whatever is I’ve been doing for the last 25 years," Milloy said. "For me, it’s been this tremendous educational experience. When I die, I’m not going to sit there and wonder what that was all about. I have been fortunate that I have been able to do this continuing education on scholarship in a way. The fact that my ideas have now gained traction in government and are going to be part of public policy, well, that’s awesome.

"Who in Washington could ask for more?"