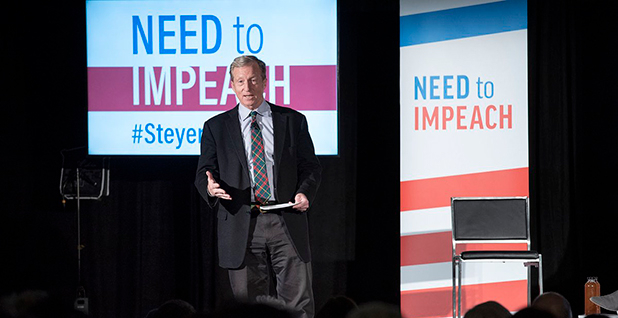 Democratic donor and activist Tom Steyer has been focused on a campaign to impeach President Trump but is also still active on climate issues. @TomSteyer/Twitter

Steyer told E&E News in a recent interview that with more than a year and a half to go until the 2020 presidential election, he’s started to consider how he’ll judge and support candidates.

But since additional candidates might join the existing field of more than a dozen Democrats vying to take on President Trump, Steyer hasn’t fully fleshed out his plans.

"One of the things that’s true is that we are not going to support anybody for president who’s not a climate hawk. I’m not going to," Steyer said.

"It’s inconceivable to me for us to be supporting someone who is not a climate hawk."

Steyer is also aware that the entire Democratic field is likely to consider itself "climate hawks," and he and others will have to sort out serious ones from the less serious.

"Will we also do the job of letting primary voters know how people stand on this issue, where they’ve stood on this issue? Yes. Is everybody going to try to rush to the head of this parade now? Yes," he said.

Steyer has been a big and outspoken donor to Democratic causes since the 2014 midterm election cycle, when he launched NextGen Climate, funded overwhelmingly by the riches he gained from leading Farallon Capital Management for nearly two decades.

He renamed NextGen Climate to NextGen America and expanded its efforts beyond climate to be a progressive, millennial-focused effort, putting significant energy into numerous races, including 2018 contests in Florida and Virginia.

But despite moving away from his sole focus on climate, Steyer still feels strongly about the issue, indicating he’s likely to make it a major part of his 2020 spending and advocacy plans.

He said Trump has been a disaster for the climate, both with his domestic policies to boost fossil fuels and with his international policies, such as pledging to pull the United States out of the Paris Agreement.

Although Steyer has had litmus tests for candidates in the past — like opposition to the Keystone XL pipeline or a goal of 50 percent clean energy by 2030 — he hasn’t put one together for 2020 yet.

Nonetheless, he told E&E News he has a "framework" for serious climate policy by candidates. "What I believe is we need to reduce global greenhouse gas emissions by 10 percent a year, every year, between now and 2030," Steyer said.

He acknowledges that the goal will be tough and is likely to include, for example, fossil fuel facilities closing or upgrading before their useful life is over.

"If we’d done this 20 years ago, we would have been able to do it without a single cost. But the fact that we spent a really, really long period of time with failure to come to grips with it has raised the bar; it’s meant the hill is steeper."

Steyer mostly avoided commenting on specific candidates in the Democratic primary contest. But he did publicly acknowledge Washington Gov. Jay Inslee’s (D) entrance into the race this month and his square focus on climate change as priority No. 1 for his candidacy.

"Jay Inslee shows up," Steyer said. "While people have been talking, he’s prioritized it as governor of Washington. He hasn’t always succeeded, but he’s run props on it; he’s tried to pass laws on it; he has passed laws on it. He’s somebody who’s spent a lot of time thinking about it."

While NextGen continues to be a priority for Steyer, he’s garnered more attention recently for Need to Impeach, an organization he founded in 2017 that advocates for Trump’s impeachment. Its campaigning has included television advertisements calling on lawmakers to begin impeachment proceedings regarding allegations that Trump’s 2016 campaign was assisted by Russia.

Democrats’ election victories in the House last year were ostensibly a big step forward for impeachment. But in recent weeks, many House Democrats, including Speaker Nancy Pelosi (D-Calif.) and some centrists such as Reps. Elaine Luria (D-Va.) and Dean Phillips (D-Minn.), have publicly voiced opposition to trying to impeach Trump, at least while the GOP is united in defending him.

Steyer, however, isn’t backing down. He challenges the notion that centrists were responsible for the Democrats taking the House majority.

"I’m not convinced for a single second that the way we won was by convincing the middle of the road," he said. "What happened was 55 percent of Americans didn’t think either party was worth going to the polls for [in 2016], and Donald Trump scared the pants off of them."

He also said climate change denial is not the same as denying the importance of impeaching Trump.

"[email protected] remains the most corrupt president in American history, just in terms of criminal investigations. There’s still the hush money investigation and the emoluments lawsuit. He’s NOT exonerated of corruption, by a long shot," Steyer tweeted.

"Impeachment shouldn’t hinge on the contents of Mueller’s report. Mr. Trump has committed eight additional impeachable offenses on which it has no bearing," he later added.