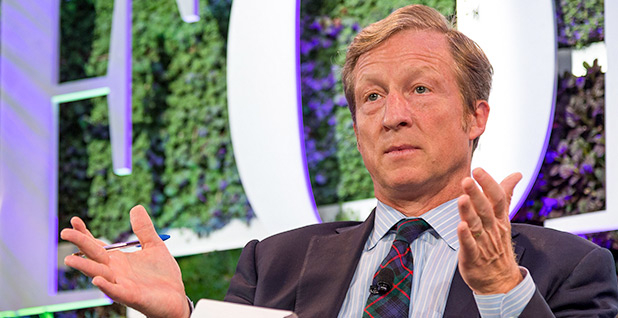 A Michigan group backed by California billionaire Tom Steyer is setting aside a proposed ballot initiative under an agreement that commits the state's largest utilities to a clean energy expansion. Fortune Live Media/Flickr

Michigan’s largest utilities declared a truce with the organizers of a campaign funded by billionaire Tom Steyer’s NextGen America that had been pushing a ballot initiative to require the companies to get 30 percent of their energy from renewable sources by 2030.

Clean Energy, Healthy Michigan said it would set aside the campaign under an agreement with DTE Energy Co. and Consumers Energy Co. The deal commits the companies to a 50 percent clean energy standard by 2030 through deployment of more renewable energy and efficiency gains. The utilities will lay out their plans in upcoming filings with the Michigan Public Service Commission.

The agreement specifically calls for the utilities to get 25 percent of their energy from renewables by 2030 and another 25 percent from reductions in energy use. The compromise comes amid continued clashes between the utilities and renewable energy advocates in a series of cases before the PSC, especially concerning solar deployment.

"We appreciate that Tom Steyer and the sponsors of Clean Energy, Healthy Michigan have taken the time to understand our commitment to carbon reduction and how Michigan’s energy plan puts the tools in place to achieve this goal in a thoughtful and affordable manner," the CEOs said. "Our two companies are overwhelmingly in favor of renewable energy and are focused on bringing additional energy efficiency opportunities to our customers."

In a statement, Steyer said the agreement makes "Michigan a national example of how consumers, public interest advocates and energy companies can work together to find real solutions to combat climate change."

"We think this is a much firmer commitment," Freeman, executive director of the Great Lakes Renewable Energy Association and a former state legislator, said in an interview. "The thing that makes this deal strong is that the utilities have committed to integrate these goals in their IRP plans."

DTE and Consumers Energy, which collectively sell electricity to 4 million customers in Michigan’s Lower Peninsula, have voluntarily taken steps to transition away from coal.

It was almost exactly a year ago that DTE pledged to take steps to cut carbon emissions 80 percent by 2050. In March, the company announced plans to add another 1,000 MW of wind and solar by 2022.

But the agreement announced Friday will take the companies beyond what they’ve already agreed to do.

"This agreement is an indication of the recognition that they have to accelerate plans to transition away from coal, nuclear and, to an extent, natural gas," Freeman said.

The agreement was applauded by renewable energy and environmental advocates, including the Michigan Conservative Energy Forum, which opposed the ballot initiative.

"An out-of-state billionaire purchasing a ballot campaign to increase the renewable energy standard is not the right approach to advancing clean energy options in Michigan," said Ed Rivet, the group’s executive director. "The deal announced today will give Michigan a clear path forward that will help diversify our energy mix while expanding access to affordable electricity for Michigan ratepayers."

The agreement avoids a repeat of a heated, expensive campaign six years ago when Michigan voters soundly rejected Proposition 3, a proposed constitutional amendment that would have established a 25 percent renewable standard by 2025.

In that election, DTE and Consumers Energy each spent more than $10 million to defeat the measure while the League of Conservation Voters, the Green Tech Action Fund, the BlueGreen Alliance, the American Wind Energy Association and billionaire hedge fund manager Julian Robertson each spent at least $1 million in support, according to the Michigan Campaign Finance Network.

Through April 20, the Clean Energy, Healthy Michigan campaign had already raised more than $2 million, all through Steyer’s NextGen Climate Action and NextGen America funds, according to the same group.

In late 2016, Michigan utilities signed off on an expansion of the state’s renewable standard from 10 percent in 2015 to 15 percent by 2021 in an effort to sway Democrats in the Legislature to support an energy law overhaul as part of Snyder’s agenda.

DTE and Consumers Energy have largely met obligations under the RPS by adding large wind farms.

Meanwhile, the companies have skirmished with solar advocates in recent cases at the Public Service Commission.

The solar industry also clashed with the utilities over a new distributed generation tariff approved by the PSC to replace Michigan’s net metering policy (Energywire, April 19).

The changes won’t take effect until at least next year at the conclusion of utility rate cases filed after June 1, and existing net-metered customers will be grandfathered under existing tariffs for a decade. But the PSC’s decision upset solar advocates, including some free-market conservatives in the Legislature who see distributed energy as a needed source of competition for monopoly utilities.

Exactly how the 50 percent clean energy pledge plays out remains to be seen.

The first clue may come next month when Jackson, Mich.-based Consumers Energy files its integrated resource plan with the PSC. The filing will include the utility’s strategy for meeting the 25 percent renewable energy goal as well as plans for boosting energy efficiency savings.

DTE will file its long-range plan with the commission early next year.