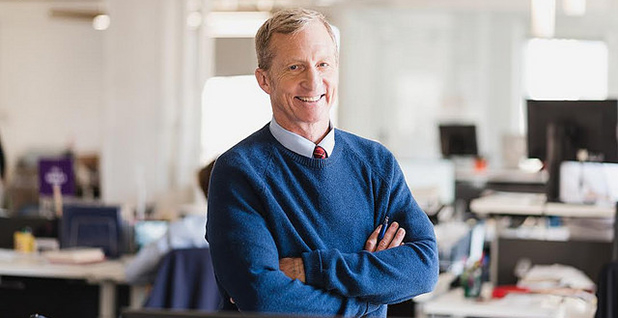 Steyer, who’s spent tens of millions of dollars trying to elect Democrats, is debating his best strategy nine months into Trump’s term. He’s one of several people debating their options, as the Trump presidency has seen some potential candidates’ opportunities increase, while others have seen theirs all but eliminated.

"I am willing to do almost anything because I view us as being in a political crisis, as well as an environmental crisis, a crisis of values," Steyer said in an interview. "When you see the choices that are being made in our society, the differential is so gigantic, and the results are so threatening, across the board."

Steyer said he’s "trying to figure out what will have the most impact. … I don’t think I have to make my decision yet" on running for office, "but I have to make a decision."

Worth an estimated $1.6 billion, Steyer made his fortune as a hedge fund manager. The company he co-founded, San Francisco-based Farallon Capital Management LLC, prospered in part from investments in coal. Steyer left the company in 2012, he said, because he was no longer comfortable investing in fossil fuels, among other reasons. He began pushing for action on climate change.

Steyer backed Democratic presidential nominee Hillary Clinton and held a fundraiser for her at his San Francisco-area home in 2015. Trump’s election probably changed Steyer’s plans, said Garry South, a California-based Democratic analyst. If Clinton had won, "Steyer would be directing most of his attention to California."

He hired aides with long political histories, joined labor groups in fighting for a $15 minimum wage, and worked to increase the tax on tobacco products. All that provoked talk he was considering running for Golden State governor (Greenwire, Nov. 30, 2015).

With Trump as president, South said, Steyer probably "now views himself as having more of an enhanced national role to play, sort of like a Democrat Koch brother." Fellow billionaires Charles and David Koch are brothers who’ve supported conservative candidates and political action committees.

Steyer said his concerns extend beyond the president. He also wants to counteract moves of the Republican-led Congress.

"We have a gigantic threat from a malevolent and incompetent federal government," Steyer said. "There’s almost no day that they don’t attempt to do something that is threatening to attack the people of California and the people of the United States."

"Thanks to Tom Steyer and other leaders of the Democrats’ internal war, California Democrats will be caught up in brutal and costly 2018 primaries that will divide their party even more and lose votes along the way," she said in an email. "Meanwhile, California Republicans will be able to focus on putting forth sound legislation for their constituents."

She didn’t address the possibility of Steyer running for office.

Then named NextGen Climate, Steyer’s group spent $142 million to boost Democratic candidates in the last two election cycles, according to data compiled by the Center for Responsive Politics. Steyer this cycle is helping fund an effort to flip seven GOP-held House seats in California and to elect a Democratic governor in Virginia.

"There’s no question that Steyer wants to build a profile of himself as a major political player," South said. "He’s given and spent tens of millions of dollars in the political process going back several cycles. But that’s a whole different thing from running for office yourself."

Kevin Spillane, a Republican political consultant in California, is skeptical Steyer would run for president, and "if he does, he’s not going to go very far." There are likely two dozen potential Democratic candidates in 2020, Spillane said, and Steyer as "a billionaire who’s never held office, who made money off of dirty energy, is not appealing."

While Trump ran as a billionaire with no political experience, "Republican voters are different from Democrats," Spillane said. "Republicans, they like the outsider. Democrats like elected experience, someone who checks off those boxes," including relationships with left-leaning interest groups.

The Trump presidency has reshaped politics for many, including Steyer, analysts said. Feinstein recently announced she’ll run for re-election next year. Before her announcement, analysts said they expected her to stick around in part because she’s ranking member on the Senate Judiciary Committee.

"She now views herself as being a major player in the Russian investigation," South said. "She’s not willing to give that up."

"We need someone who has real power to take on the Trump administration," Carrick said. "She’s running for re-election because she wants to continue to do that."

The congressional investigation into Russian interference in the 2016 election also has pushed freshman Sen. Kamala Harris (D-Calif.) into the spotlight. She grabbed social media attention during hearings when committee Chairman Richard Burr (R-N.C.) interrupted her as she questioned Deputy Attorney General Rod Rosenstein. Harris has appeared on many lists for potential 2020 Democratic presidential contenders.

"She’d be much less high profile if you had a Democrat woman as president of the U.S. right now," South said of Harris. Trump’s election "changed the whole equation, and she’s capitalized." Running for president in her first term is "a stretch, but we’ll see," South added.

And it’s not just Democrats who are affected by the White House occupant. Republicans are, too. "He’s affecting everybody," Spillane said of Trump. "His shadow looms over every politician."

Trump’s presidency reshaped the political future in a negative way for a Republican seen as a potential contender for governor, said Spillane. Had Clinton won the presidency, she’d have challenges and critics, and Democrats would be on the defensive in 2018. That could have helped San Diego Mayor Kevin Faulconer (R) if he ran for governor. Faulconer was considering a race but has since decided to stay where he is as a result of Trump’s win.

"There would be some wind at his back," Spillane said, adding that Falconer is seen as a moderate. With Trump and "Republicans on the defensive, having to deal with regular controversies," Faulconer running in the Democratic-leaning state is "just too much to handle."

Steyer said that while the rebranding of NextGen Climate into NextGen America might seem new, it marks the culmination of thinking that started several years ago.

"We came to the conclusion that the way we would have progress in energy and climate was by supporting a progressive alliance that included a dedication to energy and climate, but wasn’t restricted to it," Steyer said.

During the 2016 campaign, he said, NextGen and its partner knocked on 12.5 million doors in seven swing states, talking about issues including environmental justice, economic justice, racial justice and schools. The group believed that "all of these progressive … these so-called progressive issues/values were going to rise or fall together," Steyer said.

"The only way we will get real progress is by winning elections," Steyer said.

It’s an approach shared by groups such as the League of Conservation Voters. It worked with NextGen before on green topics and is now partnering on those, as well as on the issue of Deferred Action for Childhood Arrivals,, or "Dreamers." Those are young people brought to the country illegally as children.

The shift is "also about the energy that’s out there, and the way that people are engaging and wanting to resist the Trump administration," he said.

Groups working with NextGen or LCV on immigration, health care and other issues might start to look more closely at climate issues, such as how green jobs could lift up low-income sectors, Willett said.

"It isn’t kind of put in one box or another box," Willett said. "We can be talking about racial justice and climate change and environmental justice and all the [regulation] reform, and the way that would affect lots of different sectors."

Steyer said his goal is also to "frame" issues so that Republicans don’t get to make their frame the universal one. On climate, for example, Steyer said he strives to make sure people understand he believes Republicans are not telling the truth.

It’s important for people to know instead that moving to clean energy "will create net millions of jobs," he added, and that technology and innovation will prevail over reliance on fossil fuels.

Steyer said he wasn’t putting a cap on the amount he’ll spend, starting with a "multimillion-dollar" effort to reach a half-million voters.

"We’re going to devote the resources necessary to engage the voters so we can win. We haven’t put a dollar number on it," Steyer said.

"These liberal special interests are out of touch with what Californians really value: independent representatives who get things done. Fortunately, there’s no check wealthy liberal donors could write to change that," he said.

Steyer hinted they weren’t stopping at the seven seats, but when asked for clarification on what’s next, NextGen America aides declined to say more. That said, the group is teaming up with labor groups to register voters in California and with immigrant rights groups ahead of the Nov. 7 Virginia governor’s election. Steyer pledged $1 million to build a field operation and media campaign across Prince William and Fairfax counties.

Time is running out

While for others it’s considered mostly too late to get into the 2018 governor race, Steyer, if he chose to, could fund his own campaign, South said. But wealthy self-funded candidates in California largely have not succeeded. The one recent exception is Republican Arnold Schwarzenegger, who was a movie star when he ran successfully for governor after a recall election.

Larry Remer, a Democratic consultant with the Primacy Group in San Diego, said that for Steyer, "time is running out, and he doesn’t seem to be putting the pieces together to do it." And while he could easily buy ads that would help him get name recognition, that would not help him garner needed endorsements.

"I don’t think he’s going to be able to parachute in," Spillane said of Steyer. In terms of why Steyer doesn’t say he’s not going to run, Spillane said that "you don’t rule it out because it’s always flattering to be named. It’s good for the ego. It’s good to be promoted."

But if Steyer is interested in political office, he doesn’t have too many windows left. If Feinstein wins re-election, the next time that seat might be open could be as late as 2024, should she decide to retire. The next open race for California governor would likely come in 2026.

"Is he willing to wait or is he going to take a chance?" Spillane asked.