Steyer says he’s ‘in a completely different class’ on climate 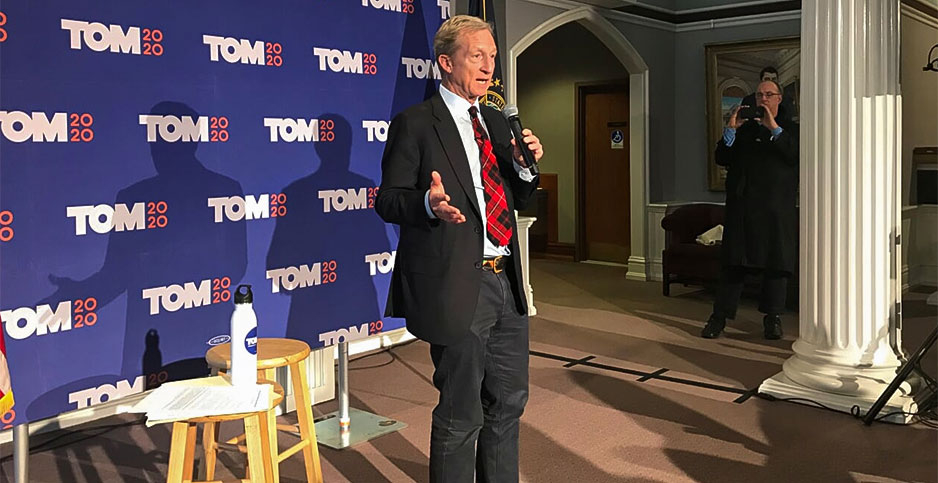 CONCORD, N.H. — Democratic presidential candidate Tom Steyer is fighting for the climate change mantle in the 2020 primary, arguing that his positions on the issue put him in "a completely different class" from the rest of the crowded field hoping to take on President Trump.

"I’m the only candidate in this race who will say it’s my No. 1 priority," Steyer told E&E News after filing official paperwork Tuesday here to run in New Hampshire’s first-in-the-nation primary election on Feb. 11.

"I’m saying it’s my No. 1 priority when no one else will," said Steyer. "I think that puts me in a completely different class."

Since Washington Gov. Jay Inslee, the self-styled climate candidate, dropped out of the race in August, various other competitors have stepped up their games on climate, often explicitly endorsing Inslee’s extensive plans or using his name.

Steyer, a billionaire former hedge fund manager who for years focused his large political spending on electing Democrats whom he judged to be climate champions, says he is the candidate because he pledges to declare climate change an "emergency" right out of the gate.

He’s devoting significant attention in stump speeches and town halls to climate change, in part arguing that fighting it represents opportunities for American leadership that would bring the world together.

"I’d use the emergency powers of the presidency. I know we have to do it. I’ve worked on it for more than a decade. There’s no doubt we have to do it," Steyer told a small crowd in Manchester, N.H.

"I know we can do it. There’s people who look at it and go, ‘It’s so big, it’s so painful,’" he continued. "We can definitely solve this. We have to lead the world."

Steyer didn’t offer details on what he would do after an emergency declaration but gave an outline of some of the areas that might be targeted.

"There are a lot of things you can change. The point is the timing. I would use all of the emergency powers of the president on day one."

Steyer also turns his climate message into a jobs message, saying his plan would create millions of them. It’s also one of unity, presenting a crisis that Steyer says can bring together the country and the world.

"We have a gigantic challenge that we have to solve together. And if we do it, it will be good for everyone in this country. And it actually is the biggest challenge we have, and it’s the thing we’ll be most proud of doing," he told the crowd. "If you want to think about how human beings come together, it’s by working together on something successful that’s really important and meaningful, and that’s exactly what I’m proposing to do."

New Hampshire environmental activist Dudley Dudley endorsed Steyer this week, joining him at the Manchester event. The nod is a victory for him in Granite State circles. Dudley rose to fame in part by leading a successful fight against a 1970s proposal by shipping magnate Aristotle Onassis to build a major oil refinery on New Hampshire’s coast.

"Our seas are rising, our forests are burning, and Tom is the best candidate to tackle those issues and beat Donald Trump in 2020," Dudley said.

"If Democrats are going to beat Donald Trump next year, we need a candidate who does more than just talk about the issues. Tom is the only candidate with a track record of being able to deliver real change as an outsider."

Steyer’s emergency declaration is a key piece of his climate plan — first released in July, weeks after entering a race he previously said he wouldn’t — and part of what he says sets him apart.

The idea of a "climate emergency" declaration started to catch on in some progressive circles earlier this year, in response to Trump’s declaration of an emergency along the United States’ border with Mexico, which was meant to free up certain funds that had been flagged by Congress for other purposes.

Declaring an emergency does not give the president unlimited powers, however. Instead, it unlocks a series of specific powers that Congress has previously enumerated for emergency situations.

Steyer might have a tough time breaking out from the large, and still fluid, group of candidates seeking the Democratic nomination on climate change. Each of the more than dozen candidates running has promised to pursue aggressive climate policies, with most endorsing the Green New Deal and a goal for the United States to reach net-zero emissions by 2050.

But at least some New Hampshire voters are receptive to Steyer’s climate plans after hearing him out.

"I think it’s a great idea. It is, as he said, an existential threat," Doug Ligor, who said he supports Steyer, remarked after the Manchester event.

"I think he’s right that if you give people a common project that most people can believe in globally, that’s how you build coalitions," Rothman said. "I think that common goal, that common purpose and his sense of urgency, could really be a rallying point."

With less than three months before primary voting starts, Steyer is polling far from the top tier of candidates. Recent national polling has him rarely rising above 1%, although he frequently hits 3% in New Hampshire and Iowa, which hosts the first caucus event.

Some other candidates and progressives have criticized Steyer for being a billionaire and accused him of buying his way into the campaign. He has spent at least $47 million of his own money on his campaign and said there’s an "unlimited" amount he’s willing to spend.

He criticized fellow billionaire former New York City Mayor Michael Bloomberg’s plans to potentially run for president, calling him out for not supporting a tax on wealth.

"If he can’t accept the idea of a wealth tax, if he doesn’t embrace it, he doesn’t understand that inequality is at the heart of the problems in America right now, then I don’t think he should run, because I don’t think he can represent the Democratic Party," Steyer told reporters.