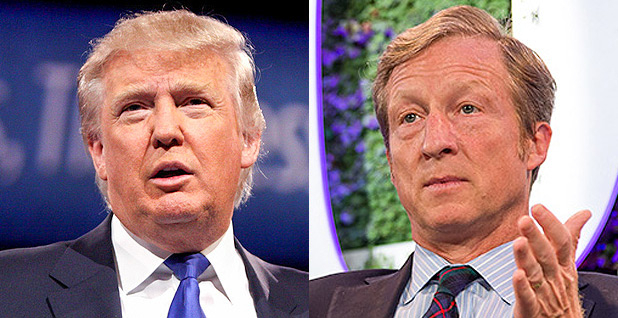 Billionaire climate change activist Tom Steyer has a new mission: looking for the best route to thwart President Trump’s agenda, including on issues beyond the environment.

Steyer on Wednesday posted on social media a video and survey asking people what issues they want his group NextGen Climate to work on, including immigration; racial justice; education; foreign policy; and LGBTQ, women’s and voters’ rights (E&E News PM, Feb. 1). More than 44,000 people had watched the video as of yesterday. More than 6,000 people responded to the survey.

Steyer, 59, said he’s formulating a plan for how he’ll organize and motivate further action and wants to reach out to as many people as possible.

"We believe that basic American rights are being attacked," Steyer said in an interview. "The positive vision for America that we think is out there is being trampled. … We feel it’s really important for Americans to be informed and engaged on what seems to us to be the greatest threat to American rights and American interests in my lifetime."

A Steyer aide said climate is still part of the mission but that NextGen wants to unite numerous groups that are part of the resistance to Trump and present an "alternative vision, and stand up against Trump attacks."

Steyer first grabbed the national political spotlight in 2012 when he quit his job as a hedge fund investor at the firm he co-founded, Farallon Capital Management LLC. He divested his fortune of fossil fuels and launched a campaign for action on climate change.

Over the past year in California, where he lives, he has dived into other issues, fighting for a $15 minimum wage, protections for farm workers and a higher tax on tobacco products. He doled out $4.3 million in political contributions last year, to the California Democratic Party, local Democratic groups, individual campaigns and voter registration efforts, and to support California ballot measures.

All that provoked talk that he was considering running for governor in 2018, when Gov. Jerry Brown (D) finishes his term (Greenwire, Oct. 4, 2016). Steyer in 2015 told E&E News that he was waiting for the presidential election before making future plans.

After Trump won the White House, Steyer said he hadn’t ruled anything out but needed "to come up with a fully baked plan — including what I’m going to do — that makes sense." He also said he won’t place any cap on how much he is willing to spend to stop Trump’s pro-fossil-fuel agenda (Greenwire, Nov. 18, 2016).

Now some political analysts speculate that Steyer is aiming for even higher political office than governor, perhaps running for president in 2020. Asked about that, Steyer didn’t shoot it down.

"Anything that I do personally is going to be consistent with this overall effort to protect fundamental American rights, stand up to the Trump administration and try and put forward this more positive vision of what America can be and should be," Steyer said. The NextGen mission is boosting grass-roots activism. His future role, he said, "is going to have to be completely consistent with that and be additive to that."

Asked if taking on Trump broadly is his new purpose, Steyer rejected the idea that climate change was his sole cause earlier. It was part of his pushing "toward a more just, fairer, more prosperous society, including dealing with clean energy, the positive aspects of clean energy, and to avoid the climate problems that we are threatened by," Steyer said.

Trump spokesmen did not respond to requests for comment. The American Petroleum Institute declined to talk about Steyer’s activities, saying the oil trade group looks forward to working with the administration and hopes it will focus on jobs, the economy and American consumers.

Since the election, Steyer has popped up at activist gatherings all over California. He joined a protest at San Francisco International Airport against Trump’s executive order temporarily banning immigrants from seven Muslim-majority countries. He co-sponsored and attended a rally with immigrant rights advocates in Los Angeles, joined post-inauguration women’s marches in San Francisco and Oakland, attended a Planned Parenthood rally in Sacramento, met with labor groups in San Jose, spoke at synagogue in Los Angeles and met with environmental justice advocates in Riverside.

Steyer said he wants to ensure that people understand the motivations for some of Trump’s actions, including disputing the size of the inauguration crowd and contending that more than 3 million people voted illegally. There’s no evidence to support it.

"Those look like first steps to try to reduce freedom of the press and move back to voter suppression in a big way," Steyer said.

Steyer said he already has the start of a large grass-roots group because of NextGen’s work during the last election. Partnering with others, it worked on voter registration in California and 14 other states. In California, they registered 800,000 people.

"The question is, how do we amplify that in the most effective way?" he said.

NextGen is gathering and analyzing data from the election, looking at whether voters they registered turned out to vote. In California, Steyer said, it looks like they largely showed up at polls. NextGen is still culling data from other states.

But, he said, "If you look at the rest of the country, I don’t know exactly the registration numbers, but certainly the engagement and turnout numbers among Democrats were significantly lower than in 2012; that was kind of a huge factor" in the election results. That speaks to the need to stimulate grass-roots action, he said.

Steyer backed Democratic presidential nominee Hillary Clinton. NextGen Climate doled out $67 million this cycle and more than $75 million in 2014 to influence races, according to the Center for Responsive Politics. Three of the six Senate candidates NextGen supported this last cycle lost. Steyer has said candidates he has boosted at the state level have won.

Caution needed not to ‘elbow people’

It’s not surprising that Steyer is working on issues beyond climate at the national level, said Robert Stavins of Harvard University’s John F. Kennedy School of Government. Stavins said that given the fears people have about Trump, Steyer’s decision to expand the causes he’s working on makes sense.

"Although climate change and environment issues are going to suffer tremendously under Mr. Trump, and I am very concerned about that," Stavins said, "the reality is there are vastly broader areas where he can have even greater damage."

Trump is constrained on green issues because regulations already are in place, and he would have to go through the lengthy procedure of enacting new ones, Stavins said.

Bruce Cain, a political science professor at Stanford University, said grass-roots movements can work, but that in the last decade, social media have become politically powerful. One billionaire might not have the force a wealthy person had years ago.

"It’s easier now for people without a lot of money to get together and create a network," Cain said. "That changes the ballgame."

Republicans have found success working with cities and state legislatures to get conservative measures introduced, he said.

Steyer should use caution as he branches out on issues, Cain said. There already are leaders in areas like immigration. In California, they include new state Attorney General Xavier Becerra (D) and former Los Angeles Mayor Antonio Villaraigosa, an announced Democratic candidate for governor in 2018. The same is true for women’s rights and other causes, he said.

"If he’s going to enter into space other than the environmental space, he’s got to be conscious of the fact that in these different areas, he doesn’t have yet much of a reputation, and there already are leaders," Cain said. "He’s got to figure out how he can be an ally without trying to elbow people out of the way."

Otherwise, the suspicion that Steyer is getting involved to help set up a run for political office will increase, Cain said. He added that he has met Steyer and believes "that at least one of the motives is he truly believes it, absolutely," that climate change is a threat.

Steyer is positioned to stay visible because California is taking on new importance in the Trump era, Cain said. Brown and other leaders have said the state will pursue climate change actions and, if necessary, challenge Trump’s efforts (Climatewire, Dec. 20, 2016). Democratic officials also are rejecting the Trump administration’s positions on immigration and health care.

"We’re going to be in California ground zero for a lot of these issues," Cain said. "He doesn’t really have to wander very far to be part of the national scene. Some of it’s going to be located right here. … He can be a player partly because the national has come to us."