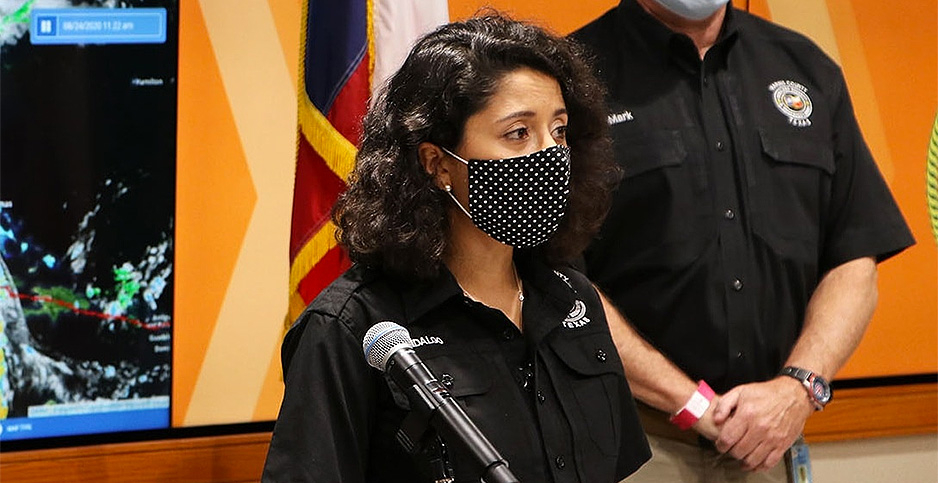 Lina Hidalgo, the county judge for Harris County, Texas, is among the leaders calling this week for Houston-area residents to be prepared for Hurricane Laura. Office of County Judge Lina Hidalgo/Facebook

HOUSTON — The U.S. Gulf Coast is bracing for Hurricane Laura to come ashore overnight, putting energy workers and their homes and businesses in the crosshairs a few years after Hurricane Harvey led to significant damage in this energy hub and the surrounding region.

Houston may avoid the brunt of Laura if the storm’s focus stays east of the city and toward the Texas-Louisiana border, although energy infrastructure could be threatened in the Gulf Coast region regardless of where Laura makes landfall.

But unlike Harvey and its extreme rainfall and widespread flooding, Laura may be more of a high-wind event for many inland areas. That raises the possibility of days or weeks without electricity for customers if falling trees and utility poles take down enough power lines. Laura also may lash refineries and other energy assets near the Texas and Louisiana coasts, rekindling fears of spills and emissions. Flooding and a storm surge with high water are concerns for some areas, as well.

Evacuation orders were put in place for some areas near the Gulf of Mexico, including Galveston south of Houston. And parts of Harris County, whose seat is Houston, were put under a call for voluntary evacuation. Laura is slated to arrive in Texas the same week the state’s largest city was touting a virtual Houston Climate Week to discuss energy and climate issues. Sessions for today through Friday were postponed.

Energy Secretary Dan Brouillette told Bloomberg TV yesterday that the industry is "very prepared" for the storm. He noted that the Department of Energy has an office responsible for catastrophic events and is working with the oil and gas industry to monitor the storm.

"We feel that the industry is very well-prepared for this type of storm," he said, adding that President Trump has directed him to make the Strategic Petroleum Reserve available in case it’s needed.

"We are doing all that we can to ensure that we are capable of doing that, immediately following the storm," Brouillette said.

Turner, Houston’s mayor, recalled that some people lacked power for a couple weeks after Hurricane Ike hit the Houston area in 2008. That storm is drawing comparisons to Laura because of its strong winds, while power outages weren’t the key issue with Harvey in 2017, even though some occurred.

"I want you to prepare as if there is going to be a lot of people without power," Turner said yesterday.

Ike was a Category 2 hurricane when it made landfall in Texas. A list of storms from NOAA offers a reminder of the aftermath, including a cost of roughly $37 billion when factoring in a consumer price index adjustment.

Still, for comparison, it lists the adjusted cost of Harvey at about $131 billion.

Economic conditions are different from recent years, including lower oil demand in the wake of COVID-19. A key U.S. oil benchmark was at less than $50 a barrel yesterday.

But potential effects from a blow along the Gulf Coast remain something to watch. The Texas coast, while the site of some improvements, hasn’t created the sort of barriers that would prevent massive infrastructure damage if a hurricane hit at just the right spot.

Reuters reported yesterday that refiners that make diesel fuel and gasoline were moving to halt eight sites with almost 2.78 million barrels a day of processing — or close to 15% of the U.S. capacity.

About a quarter of U.S. refining capacity could be affected by Laura, depending on the path of the storm, according to an E&E News review of data from the U.S. Energy Information Administration.

If it makes landfall near the Texas-Louisiana border as forecasts now show, the storm could threaten complexes in and around Beaumont and Port Arthur, with a combined capacity of about 1.5 million barrels of oil a day. Three refineries around Lake Charles, La., have a capacity totaling over 767,000 barrels a day.

If the storm veers toward the Houston area, it threatens more than 2 million barrels a day of refining capacity, including facilities along the Houston Ship Channel and Galveston Bay. Certain port operations already have been curtailed in the Houston area.

There also have been substantial evacuations from oil and gas facilities in federal waters in the Gulf of Mexico, according to a release from the Bureau of Safety and Environmental Enforcement. It listed about 1.56 million barrels per day of offshore oil production shut in yesterday.

And Texas-based Cheniere Energy Inc. said on Twitter yesterday that it had decided to temporarily suspend operations and evacuate personnel at its Sabine Pass liquefied natural gas facility in the Gulf region.

Houston already was feeling the pain of recent economic conditions before Laura’s approach.

"Houston now faces a double whammy of weak energy demand because of the COVID-19 pandemic and needs to transition away from fossil fuels to mitigate global climate change," a business group called the Greater Houston Partnership said in a recent report. "The industry, at first slow to recognize the need for change, now embraces it."

While some lost jobs have returned, the Houston area was about 217,000 jobs below its February pre-COVID-19 level based on June data, the partnership said. That includes positions both within and outside the energy sector.

Turner said people should take Laura seriously. But he also offered some of the city’s trademark optimism yesterday as the storm approached.

"We will get through it," he said. "We have been battle-tested time and time again."

Houston-based CenterPoint Energy Inc., which owns the main electric utility in the Houston area, warned yesterday that power outages could be lengthy. But it depends on where the storm goes.

"Hurricanes are unpredictable, which makes it hard to anticipate the impact to our electric system," Randy Pryor, vice president of distribution operations at CenterPoint, said in a statement. "Based on the severity of the event, customers should be prepared for outages and have resources to be without power for at least two weeks or possibly longer."

A chart from CenterPoint showed the potential length of outages, including seven to 10 days for a Category 1 hurricane that can have winds up to 95 mph and two to three weeks for a Category 2 with winds as high as 110 mph. Stronger storms had estimates of potentially three weeks up to eight weeks without power for some customers.

The National Hurricane Center said this morning that Laura was expected to become a Category 4 storm, but that remained subject to change. The actual power restoration time for a home or business can vary based on conditions on the ground.

Still, the city of Houston suggested this week that people have enough supplies for five to seven days, including water, food and medications. Extended power outages can be serious for anyone in a region where daytime temperatures in the summer routinely top 90 degrees Fahrenheit.

At the same time, CenterPoint said yesterday that it would continue to take steps to protect workers and customers during the COVID-19 pandemic.

"We are asking customers to respect social distancing guidelines and not approach working employees and contractors," Pryor said.

Turner called for people to be off the road in Houston by 8 p.m. local time tonight or sooner. With COVID-19 still a concern, he noted a need for people to have masks and sanitizer if they go stay with friends and family. He said people who need shelter can call a city line for assistance and possible placement in a convention center or other places such as hotels.

Preparations for Laura also continue in neighboring Louisiana after Tropical Storm Marco didn’t turn out to be too damaging earlier this week.

New Orleans-based Entergy Corp. said it was acquiring more resources for restoration, noting yesterday afternoon that it had nearly 7,400 workers ready to help restore service for customers in Louisiana, Mississippi and Texas. That included employees, contractors and mutual aid assistance. More help may be on the way.

"We are bringing in special equipment, including high water vehicles and drones that help us more quickly assess damage," Entergy said. "We are staging restoration crews in strategic locations to be ready to respond to outages as quickly as possible."

The company noted that added public safety measures also would be taken because of COVID-19, saying "customers should prepare for extended restoration times, especially if there are widespread outages."