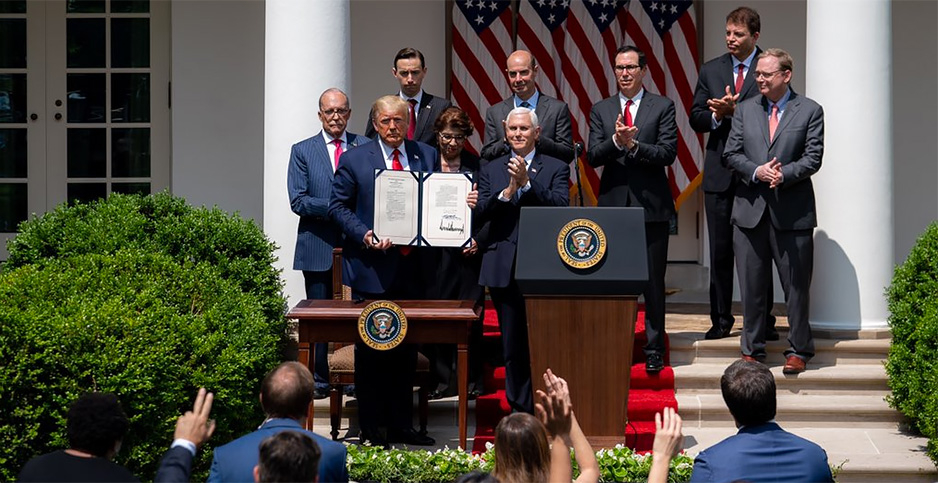 President Trump at the White House on Friday with other administration officials after signing legislation to modify the Paycheck Protection Program. @realDonaldTrump/Twitter

An unexpectedly better May jobs report appears to have done little to advance talks on additional COVID-19 stimulus legislation, as weeks of nationwide civil unrest over the death of George Floyd is thrusting police reform onto an already crowded legislative agenda.

Top Democrats pointed to Friday’s monthly jobs report — in which the nationwide unemployment rate fell to 13.3% after the economy added a surprising 2.5 million jobs — to argue for more stimulus for the pandemic-battered economy.

Speaker Nancy Pelosi (D-Calif.) said the unexpected job gains were proof that "decisive action by Congress to support small businesses and workers can make a strong difference in our economy."

She said, however, that more needs to be done. "[W]ith more than 100,000 Americans tragically dead, 21 million still out of work and state and local budgets collapsing, now is the worst possible moment to take our foot off the gas," she said in a statement.

Republicans, who for weeks have resisted Democratic calls for additional stimulus, were jubilant over the jobs report.

While noting that the "economic comeback is just beginning," Senate Majority Leader Mitch McConnell (R-Ky.) said Friday that "even in these early days of our careful reopening, the American people are already trouncing expert predictions and starting to come back strong."

He did not rule out additional COVID-19 stimulus but reiterated the GOP position that it must "be laser-focused on helping schools reopen safely in the fall, helping American workers continue to get back on the job, and helping employers reopen and grow."

"We must keep the wind in our sails, not slam the brakes with left-wing policies that would make rehiring even harder and recovery even more challenging," McConnell said in a statement.

Senate Minority Leader Chuck Schumer (D-N.Y.) warned Republicans that another great depression looms without additional action. "Now is not the time to be complacent or take a victory lap," he said Friday.

But chief White House economic adviser Larry Kudlow said Friday he did not expect serious talks on more stimulus to start until after July 4, even as President Trump said he was open to more stimulus, noting the trillions already enacted.

"We are set up to do more if we want," Trump said Friday. "I think we should because … we are dominant."

The president spoke at a White House event to tout the employment figures and sign legislation to expand the Paycheck Protection Program.

Much of the debate over the next round of COVID-19 relief will be regarding state and local funding, as well as extending unemployment benefits, but House Democrats are also readying infrastructure legislation for the floor in the coming weeks.

Numerous groups and lawmakers have continued their lobbying for a variety of energy and environment policies, including expanded funding for energy efficiency and renewables tax credits and improvements to national labs (E&E Daily, June 5).

"The national laboratories are a national treasure," wrote lawmakers in one letter, led by Reps. Ben Ray Luján (D-N.M.) and Chuck Fleischmann (R-Tenn.). "An investment in their infrastructure is an investment in American workers and the U.S. economy today for a prosperous and secure tomorrow."

The Senate is moving forward with its own path on highway, water projects and drinking water legislation but is focusing this week on public lands (see related story).

Widespread protests over Floyd’s death at the hands of Minneapolis police are adding another weighty issue to the congressional agenda.

House and Senate Democrats this morning will unveil a sweeping police reform bill in response to the protests.

"We need to look at the training that is done with law enforcement," Congressional Black Caucus Chairwoman Karen Bass (D-Calif.) said on CNN’s "State of the Union" yesterday. "We need to do things in accountability, transparency and training that we believe would make a big difference."

House Minority Leader Kevin McCarthy (R-Calif.), who for weeks has slammed House efforts to work remotely, said last week that the chamber should return to session to begin discussing legislation regarding policing.

"I think we could easily find common ground on both sides. And we could do it swiftly. But it’s more difficult if we’re away. It’s more difficult to have those conversations and listen and looking at one another, not remotely, but sitting inside a room and being able to talk and listen," McCarthy told reporters.

McCarthy cited a few possible areas of compromise, including more money for police training, stronger oversight and audits of police forces, and altering rules to make it easier to fire bad cops.

The House, for now, does not have any floor votes scheduled until the last week of June and instead is focusing on preparing legislation that can move to the floor soon thereafter.

Among those items are the fiscal 2021 spending bills, the annual defense authorization bill and a more than $500 billion infrastructure package.

House Appropriations Chairwoman Nita Lowey (D-N.Y.) announced last week that her panel plans to use the first two weeks of July to mark up the spending bills and would then move them to the floor in the later part of the month (see related story).