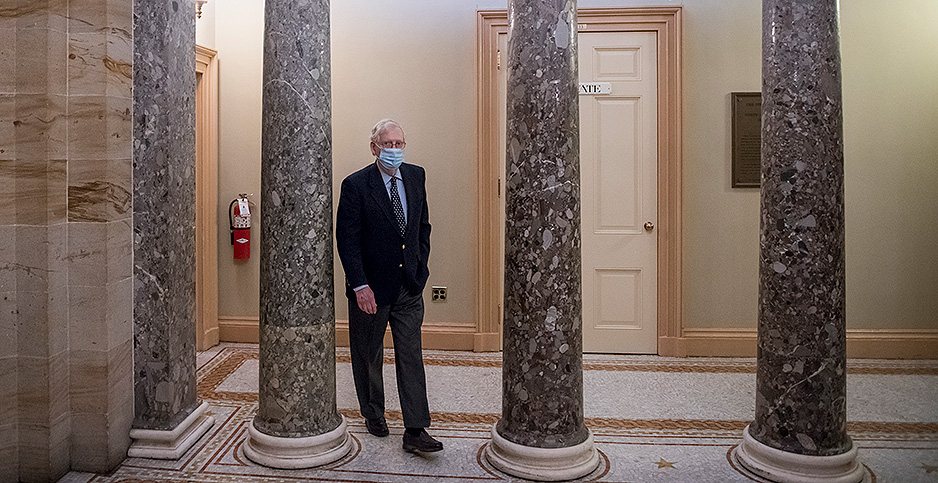 The annual defense authorization bill remains in temporary limbo amid a dispute about whether to boost the direct economic relief payments included in the year-end omnibus package.

Senate Majority Leader Mitch McConnell (R-Ky.) plans to initiate a process this evening that could allow the Senate to end debate and vote to override President Trump’s veto of the fiscal 2021 National Defense Authorization Act in the coming days.

The House voted 322-87 to nix the veto earlier this week, and the Senate was expected to quickly follow suit.

But when McConnell attempted yesterday to set up a vote on the NDAA, Sen. Bernie Sanders (I-Vt.) and Democrats objected, demanding that the Senate take up a bipartisan House-passed proposal to raise the direct payments provided in the omnibus from $600 to $2,000.

That forced McConnell to maneuver to a longer process to end debate that could extend consideration of the veto override until the end of the week.

Democrats have a narrow window with just days remaining in the session, but Minority Leader Chuck Schumer (D-N.Y.) said today that there are enough votes in the Senate for the $2,000 checks with a number of Republicans supporting the idea publicly.

"Put it on the floor, and I believe it will get the 60 votes," Schumer said this morning of the House-passed bill, dubbed the "Caring for Americans With Supplemental Help (CASH) Act."

Trump vetoed the NDAA last week over demands that lawmakers address the so-called Section 230 liability shield for social media companies and his opposition to a provision that would rename military installations named for Confederate generals.

The NDAA includes an array of energy and environmental provisions, including expanded sanctions on the Nord Stream 2 natural gas pipeline, cleanup of per- and polyfluoroalkyl substances, and efforts to enhance climate resilience at military bases.

The president had threatened to reject the year-end spending package as well, unless Congress went back and added $2,000 direct checks, amid other demands, but he eventually relented and signed Sunday evening.

"$2000 ASAP!" the president tweeted this morning. But for now, it’s his own party standing in the way.

When Democrats attempted to bring the House direct payment bill to the Senate floor yesterday, McConnell objected twice, instead pushing his own proposal that would tie the $2,000 checks to a repeal of the liability shield and election fraud measures, both poison pills for Democrats that would effectively tank the proposal.

Schumer called it a "blatant attempt to deprive Americans of the $2,000 survival check."

"Sen. McConnell knows very well how to make a bill a law, and he knows how to kill a bill," Schumer said. "The only way to deliver the $2,000 survival checks to Americans is to pass the bipartisan House-passed bill."

House Speaker Nancy Pelosi (D-Calif.) added this morning that Democrats are "not giving up" on pushing the $2,000 checks through during this session.

"I do hope that in the days ahead, and we have a few days left in this session, that they will see the light and understand the suffering that is going on in our country," Pelosi told reporters.

The impasse means the Senate will be working around New Year’s Day and ahead of Jan. 3, when the 116th Congress will officially come to an end.

Both the House and Senate will kick off the 117th Congress on that day, a Sunday, ahead of the much-anticipated runoff elections in Georgia and Wednesday’s meeting to certify the Electoral College vote.