Stimulus push grows, but will it cover energy, enviro issues? 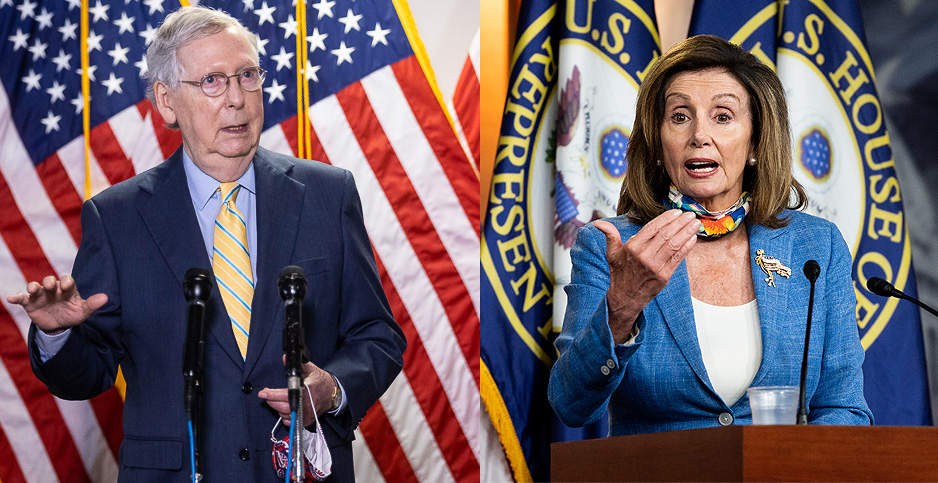 Both parties and the White House agree on the need to enact more COVID-19 relief before the August recess, but there’s less common ground on what that package should contain.

Environmental groups and energy advocates, and their allies on Capitol Hill, are continuing to push their issues, but Republican leaders in particular are looking to keep legislation focused.

The Kentucky Republican’s comments open the door to talks later this month, but the GOP and White House have yet to outline specifics.

McConnell said the next phase of COVID-19 relief should be targeted to economic and public health issues raised by the pandemic, while House Minority Leader Kevin McCarthy (R-Calif.) said legal immunity for small businesses must be included, as well.

"We’ve got to get day cares and schools open again," McCarthy told reporters last week. "They’ve got to be protected."

Treasury Secretary Steven Mnuchin said Thursday that the next package may include money to help schools "properly equip" their facilities to reopen in the fall.

But Mnuchin added that the next bill will be "much more targeted" for businesses that still need help, noting that there’s still about $130 billion left over from the massive stimulus signed into law in late March, the Coronavirus Aid, Relief and Economic Security Act, or CARES Act.

Congress and the White House will also "seriously consider" whether more direct payments for individuals are needed, said Mnuchin, who has been a top Trump administration negotiator with congressional Democrats throughout the pandemic.

House Democrats continue to tout the priorities of the "Heroes Act," which passed the chamber in May.

It contained trillions of dollars in emergency aid for state and local governments and public health infrastructure but has been ignored by Senate Republicans (E&E Daily, May 18).

GOP leaders have been cool to Democrats’ pleas for more aid for states and local governments, saying it would reward poor fiscal planning in blue states.

But there’s also support among many Republicans for helping states and localities out as they suffer from declining tax revenues from the pandemic.

McCarthy seemed to open the door to such assistance if it had strings attached, such as limiting funding to expenses incurred directly by the pandemic.

"I personally would not like to see this money go to governors," he said. "I’d like to see it go to cities and counties. What I’m watching in my own state that the governor is using it almost as ransom, not delivering it as Congress has asked him to do down to the counties who need it so greatly."

Major energy and environmental initiatives have been absent from the various phases of pandemic relief enacted this year, but the $1.5 trillion green infrastructure package the House passed last week would inject tens of billions of dollars into clean energy and water programs (E&E Daily, July 2).

That measure responded to the growing cry from clean energy advocates for COVID-19 aid for the struggling sector, which has lost more than 600,000 jobs since March.

However, Republicans remain unified against the sweeping clean energy provisions included in the House bill, which McConnell derided last week as "a multi-thousand-page cousin of the Green New Deal masquerading as a highway bill."

House Speaker Nancy Pelosi (D-Calif.) pushed back on Thursday against McConnell’s near-daily taunts over the bill.

"Exactly," she said. "We’re not siphoning off money. We’re building infrastructure for the future, not for the ’50s, and we’re doing it in a way that cleans the air."

In a joint statement, a coalition of liberal groups called for the Senate to strengthen the House’s infrastructure bill, which they called "a step in the right direction" in tackling climate change and the coronavirus.

"That being said, we believe this bill does not go far enough to transition our economy off of fossil fuels," said the coalition, which includes the Sunrise Movement, the Climate Justice Alliance and Greenpeace USA.

"To rebuild our surface transportation and renewable energy infrastructure, and address the systemic racial inequality that’s been so starkly highlighted over the past few months, we need a much larger bill that places environmental justice and workers at the very center. $1.5 trillion simply doesn’t match the enormity of the crises we’re facing."

This week, the House Natural Resources Subcommittee on National Parks, Forests and Public Lands will host a forum to examine environmental opportunities in economic recovery.

Schedule: The Natural Resources subcommittee forum is Tuesday, July 7, at 2 p.m. via webcast.