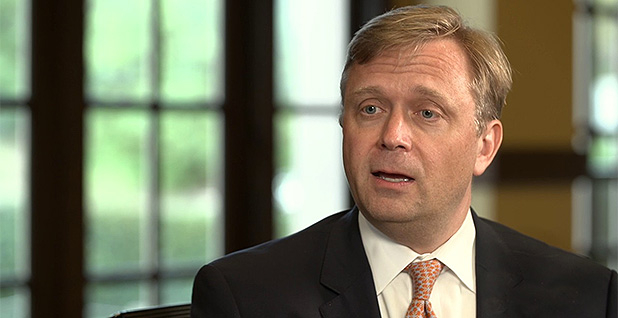 Steve Vavrik, the CEO of Broad Reach Power LLC, said his company's plan to develop battery storage in Texas and elsewhere is part of an effort to aid grid reliability as more renewable energy comes online in the United States. Apex Clean Energy

Houston is reeling from low oil prices and the novel coronavirus, but one electricity startup in the nation’s longtime energy capital may nearly double its small workforce by the end of the year as it rolls out a storage-focused expansion.

And it’s not pushing for federal storage tax credits to get there.

Broad Reach Power LLC was formed last year to help address the future of electric reliability, according to CEO Steve Vavrik. He sees reliability as the "linchpin" of a transformation to help get more intermittent wind and solar on the grid.

"The more you’re going to want to do to bring lower-cost, lower-emissions generation online, you’re also going to have to provide a storage solution," said Vavrik, who is also a managing partner at Broad Reach. "And we think we’ve identified the right markets and a solution to do that to bring those resources on quickly."

Broad Reach recently detailed a plan to build about 150 megawatts of battery storage capacity spread over 15 locations in Texas this year — roughly equal to the amount installed and accounted for in the state’s main power market through May.

The company currently has no projects connected to the grid, but it has invested close to $100 million and is working to develop a 3-gigawatt solar and storage portfolio across the West — including about 350 MW of batteries slated to come online within a year in Texas.

The Electric Reliability Council of Texas is tracking proposed battery additions of more than 12,300 MW, which likely won’t all get built. The future of battery storage integration in the ERCOT region also is the focus of a task force.

The Broad Reach plan comes as others in the energy storage industry have been calling for a federal investment tax credit (ITC) for storage, echoing incentives for wind and solar projects. Yesterday, House Democrats outlined a proposal to extend and expand certain clean energy tax breaks, including the possible extension of ITC eligibility to energy storage (Greenwire, June 22).

"Incentives like an ITC for stand-alone energy storage systems will offset reductions or delays in market deployments in both the near- and medium-term," the U.S. Energy Storage Association said in a March statement on economic stimulus options in the wake of the coronavirus pandemic.

But the 52-year-old Vavrik, citing his experience working on wind and solar projects, said federal production and investment tax credits in many ways "actually slow your development down, because then you have a new constraint." Still, future solar generation from Broad Reach may be eligible for the solar ITC. Vavrik previously worked for companies such as Apex Clean Energy and SunPower Corp.

Broad Reach is backed in part by EnCap Investments LP, a Texas-based venture capital firm that dates to 1988 and has a history of oil and gas investing. Last year, EnCap announced an energy transition effort that includes Jim Hughes, the former CEO of First Solar Inc.

Broad Reach has 16 full-time employees, but that could climb to 25 or 30 people by the end of the year, said Vavrik, who lives in Virginia but is back visiting Texas this week. The company will need workers with operating experience, as well as others in development, he said.

The CEO recently talked by phone to E&E News from Charlottesville, Va., about the 2020 election; federal tax credits; and the effects of COVID-19, the disease caused by the novel coronavirus.

It’s a presidential election year. How does that affect your work or your planning?

The company was founded based on some fundamental trends that I think are either going to continue or accelerate depending on who wins the presidential race.

Wind and solar technology continues to get cheaper. So there will be new wind and solar generation brought on the grid. I think it’s a matter of pace. How quickly will there be additional policy reasons that I would think a Biden administration might promote rather than a Trump administration?

The policy futures that we focus on [are] probably more at the state level or even the [independent system operator] level. We want to make sure that the tariffs and the rules … can reflect the new technology that these batteries can provide. And make sure the rules are fair for all generation resources.

We want to make sure that … ISOs and their dispatch rules and their interconnection rules treat it fairly across all technology types for either new load or new generation.

There has been talk about a federal storage investment tax credit. How important would that be?

It’s something we’d rather not see.

We’ve got a big pipeline of business, and we’re not relying on the ITC. I spent two decades working on wind and solar projects. And in many ways, the [production tax credit] and ITC actually slow your development down, because then you have a new constraint.

It’s not a customer. It’s not [an] equipment vendor. Now it’s tax equity. And especially entering into a recession or wondering how much tax equity will be available, I’d rather not have an artificial ceiling of tax equity get added.

Can you explain what you mean by tax equity?

Large utilities, integrated utilities [may] because of their utility business. But independent generators [may not] because they’re building all the time, and so typically, they’ve got depreciation shield, and they’re not paying taxes for years.

So those that don’t have to arrange tax equity financing.

Those investors that can invest into your project to use the tax credits — there actually [are] only a handful of those. There’s only so much they can do and so much capital they can invest.

Why are you expanding your workforce in the middle of a pandemic?

When the pandemic hit, our first concern was safety for our employees and the people with contractors and everyone we’re working with. We closed our offices in Houston, and everyone’s working from home.

One advantage of not having any operating projects right now is a lot of that development work can be done from home pretty easily. So it’s looking at sites and negotiating contracts and getting in line ordering equipment.

Now equipment’s arriving and we’re building it, so we worked with contractors and … made sure they were prepared and had the equipment to work safely. And they’re doing that.

There was an initial delay on our schedule of the project, but we’ve … caught a lot of that up. Not completely. We’re on schedule to be online this summer [at some of the sites].

What we’re providing is a reliability service, and we’re seeing the needs for the service to keep increasing.

The added uncertainty is people’s power demand usage patterns have changed. People are not commuting at the same time or not going into the office, and maybe they won’t, so how will utilities manage that? The wind and solar will still generate when it’s windy or sunny.

Many of the industries I think are … emerging out of the pandemic pretty strongly. One nice thing about Houston is you’ve got the talent base for the skills we’re looking for. We’re eager to bring more people on board.

Is COVID-19 maybe an opening for the company?

The fundamentals were strong a year ago. I would say they remain strong despite the pandemic.

I don’t view it as an opening. I view it as a challenge, more to make sure that everyone’s safe and recovering.

One thing it’s illustrated, though, is how critical a reliable power grid is.

Do you feel like storage is underdeveloped in Texas?

I would say actually, it’s on track. All ISOs, their No. 1 concern is reliability, making sure the new equipment, the new technology that’s going to be introduced to the grid is fully understood and studied.

The cells … we’re buying now are different from the cells a year ago. They’re cheaper. They’re higher energy density and better performance. Lower degradation. All the things are new. So it just takes some time to learn about these things and to understand the capabilities and then amend the rules to allow this.

We’re working really closely with the working groups at ERCOT. We find them really open-minded and realize that inevitably, it’s their responsibility to solve this reliability challenge. I think they appreciate that there are companies like Broad Reach and others … bringing to them the new technology.

Why is the company based in Houston?

The Texas market is … very ripe for storage given the conditions. Lot more wind and solar coming online. It’s a very transparent market. The market rules are clear. A tradition of being open to independent investment [and] independent generation.

And there really isn’t a better town for that than Houston. We did consider other towns. We considered New York and Chicago and LA.

What should people know about your company?

What we want to be is a storage-based independent power producer — IPP.

Storage-based because we think that’s critical for the next chapter of the power grid transformation, and the sort of risk management that storage provides is going to be … [in] increasing demand.

Secondly, though, the IPP part of it is we think a network of assets is the right way to manage this. We think the opportunity is big enough that it’s going to require megawatts or even gigawatts of storage.

It is modular, so you can put the storage where it’s physically most needed, but you can manage it as a network of assets.

Many IPPs have experienced financial difficulties before taking new strategies. Why would you want to emulate the IPP model?

Is it the house or the mortgage that’s the problem? When you look at the financial struggles of some of the companies, it may be due to the decisions made into financing the business rather than the business itself.

When you build an IPP based on generation … you’re hoping that power prices keep increasing. So a number of the IPPs got in trouble with that. And so what they’re doing is selling [some] assets or now retiring [some] assets.

When you think about storage and risk management, what you’re taking a view on is more about volatility and uncertainty.

More cheaper technology, especially wind and solar, are poised to get integrated. It’s going to increase the price risk. Storage can provide solutions to that price risk.

Who will be the customers for the 15 storage sites planned in Texas?

The companies that procure the services that we’re selling are the [retail electric providers] and the municipal utilities that … [may] buy, for instance, ancillary services, reliability services.

Are the storage and power spoken for, or are you going to build these 15 projects either way?

All of our money is coming 100% from our own investors. We’re then talking to these [retailers] and municipal utilities for financial swaps or physical contracts. We may be interested in financing the whole portfolio of projects later, once they’re built and operating.

Have you said how much you’re spending on these?

It varies project by project, but each of these 15 projects is between $5 [million] and $6 million.