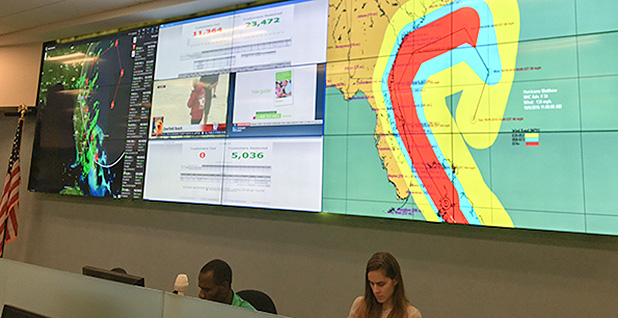 Florida Power & Light Co. has been monitoring Hurricane Matthew for more than a week, a company spokesman said. At the utility's command center in West Palm Beach, a wide screen monitors the storm's path and wind intensity. The center chart will track power outages and customers restored. FPL expects to have roughly 2.5 million of its 4.8 million residential and business customers to be without power because of the storm. Photo by Kristi E. Swartz

WEST PALM BEACH — Florida’s largest electric utility is facing the most significant test to its power grid in more than 10 years as Hurricane Matthew pummels the state with high winds and heavy rains.

And in Georgia and North and South Carolina, electric companies are telling residents to prepare for extended power outages as the storm moves up the coastline.

"The impacts of this storm will far exceed design standards of many homes and businesses, and that will also apply to our electrical system," Florida Power & Light Co. spokesman Robert Gould told reporters at a news conference here yesterday afternoon.

Many homes and businesses in West Palm Beach and Lake Worth were boarded up by yesterday morning. Most restaurants and grocery stores were closed by noon, and police were urging people to stop driving by the middle of the day.

Gould did not estimate how long the power would be out but warned that the damage would stretch far beyond what is routine.

FPL said 307,250 residents and businesses were without electricity at 5 a.m. EDT this morning. The largest tally was in Brevard County, where one-third of its 304,000 customers are without power, according to FPL’s website. FPL workers already restored power to more than 144,000 customers overnight, but Gould warned that customers may lose electricity more than once. If the utility was able to turn the lights back on to an area in between bands of wind and rain, there’s a high chance the power would go out again if the weather got worse, he said.

The figures are a sharp contrast to Hurricane Wilma, which knocked out power to more than 98 percent of FPL’s territory in 2005. This is in part because Matthew’s heaviest winds and rains were north of the highly populated counties of Miami Dade, Broward and Palm Beach as well as much of Florida’s west coast.

"We will be restoring power, but in some cases, the storm will be doing damage in that there’s not much left to the infrastructure, just like it would be with homes or businesses," he said at FPL’s Command Center here.

Gould spoke to a small crew of reporters as the wind and rain began to pick up in Palm Beach County, one of several in the path of Hurricane Matthew, which Gould said likely would hit the state around Cape Canaveral.

The Category 4 storm is the worst to hit Florida since Hurricane Wilma tore across it in October 2005. The storm knocked out nearly 98 percent of the power in FPL’s territory.

The storm was the last of two mean seasons in which Floridians were battered by back-to-back hurricanes. The widespread damage and long-lasting power outages led to a massive outcry from residents, businesses and elected officials for the state’s utilities to do more to harden the power grid.

Politicians filed bills that would do everything from bury all of the power lines to require all gas stations to have generators. Some major cities wanted to separate from the power grid and form their own municipal power company.

Much has happened since then.

FPL spent $2 billion to make its system more storm-resistant, Gould said. This includes inspecting 1.4 million poles and strengthening 600 of its main lines that run to hospitals, fire stations and other emergency stations.

The company also has cut back vegetation across 135,000 miles of its system, he said.

Duke Energy Florida, based in St. Petersburg, spent $2.4 billion to upgrade its system since 2004. This includes cutting back trees and replacing wooden poles with steel or concrete, the utility said.

Florida’s population also has grown during that time. Duke now has roughly 1.7 million customers across a 13,000-square-mile territory. FPL’s customers have increased to 4.8 million.

Gould said roughly 40 percent of FPL’s customers are going through a hurricane for the first time — or at least the first time in its territory. The utility estimates that roughly 2.5 million residential and business customers will lose power.

What’s more, Matthew is poised to run straight up the I-95 corridor, hitting densely populated areas and a significant part of FPL’s territory, Gould said.

"And Mother Nature has not done much housecleaning. Trees, branches, palm fronds, all of that will be flying around," he said.

Help up and down the Southeast coast

Electric companies in Massachusetts, Oklahoma and other parts of the Midwest have sent crews to help FPL. Duke Energy Corp. also is a member of a mutual assistance organization and has agreements with utility contractors to ensure that the necessary resources can be brought to Florida from throughout the Southeast.

Duke Energy spokeswoman Megan Miles said the utility is confident it has the resources to restore power in North and South Carolina. The company may opt to bring in workers from its Midwestern territory to help, as well, she said.

Southern Co.’s Georgia Power has thousands of workers staged throughout the Peach State. The utility has reached out to its sister companies in Alabama, Florida and Mississippi to be on guard to help, as well, company spokesman Craig Bell said.

"The Southeast has been spared by hurricanes really the last five years. It’s truly a test," Bell said in an interview with E&E News.

That Matthew could remain as strong as a Category 3 or 4 storm off the coast this weekend is significant, Bell said.

"We still don’t know what it’s going to do, so we want to be prepared, and we want folks to understand that this is going to be serious, and they need to make the proper plans and set the proper expectations for getting out while they can," Bell said.