Storm path dilemma: Face peril at home or virus at a shelter 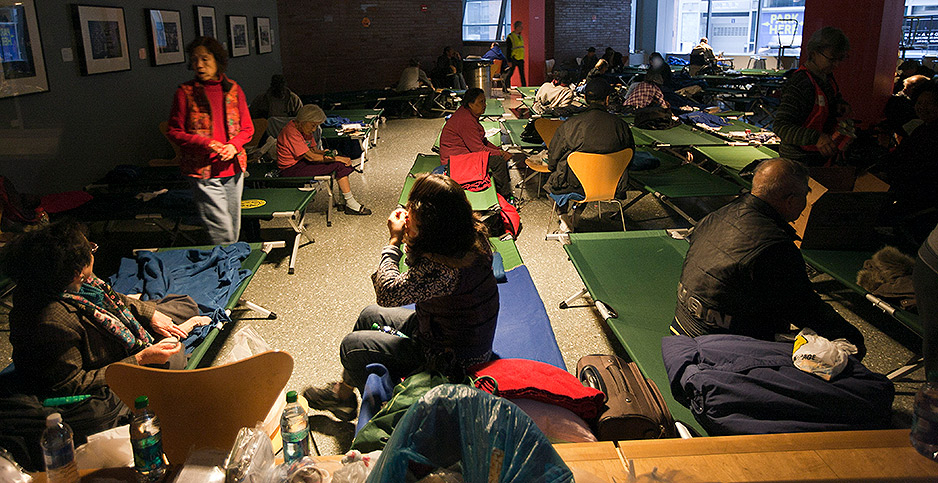 New Yorkers take shelter during Superstorm Sandy in 2012. Disaster experts say evacuees will have to maintain social distancing because of the coronavirus. Natan Dvir/Polaris/Newscom

Emergency officials across the United States are racing to avoid a health catastrophe if massive evacuations are needed during hurricanes or wildfires at a time when people are being told to maintain social distancing.

The officials are trying to minimize the use of traditional evacuation centers such as armories and school gymnasiums, where avoiding contact would be difficult. They’re also trying to figure out how to convince people that it’s safer to evacuate than stay at home for fear of being exposed to the coronavirus.

The American Red Cross is searching for hotels, dormitories and other facilities with separate rooms for evacuees in areas of the country most at risk for hurricanes and wildfires.

With forecasters predicting an above-average number of hurricanes and wildfires in the coming months, emergency officials fear potential chaos if they have to accommodate hundreds of thousands of evacuees, including people facing the greatest risk from COVID-19.

"We need to evacuate much earlier. That’s going to be a big challenge for everybody," John Rabin, FEMA’s assistant administrator for field operations, said during a videoconference Wednesday on disasters. "It’s going to take longer to evacuate and address issues such as isolation and handling COVID patients."

Rabin also warned about a shortage of volunteers to help with disaster response because "the demographics of volunteers are often those in high-risk categories for COVID-19."

The Red Cross, which is responsible for disaster sheltering along with FEMA, has been working since February to find alternatives to the congregate facilities that in previous hurricanes have accommodated thousands of evacuees.

When Hurricane Harvey hit Texas in 2017, more than 40,000 people took refuge in dozens of shelters, including a 10,000-bed facility set up in Houston’s NRG Center, a massive convention hall.

The Red Cross has avoided opening any congregate shelters since early March and used hotels and motels to temporarily house everyone displaced by the tornadoes that hit the South in March and April, Kieserman said in an interview.

But there will not be enough hotel rooms to handle evacuations from hurricanes and wildfires, both of which cover far broader swaths than tornadoes. More than 1 million people were ordered to evacuate from Florida, Georgia and South Carolina in September as Hurricane Dorian approached.

"There’s no avoiding congregate sheltering this summer. It’s going to happen," Kieserman said. "The question is, can we minimize the number of days it’s happening by prearranging non-congregate options, and can we prioritize non-congregate shelter for vulnerable populations and those at the highest risk for contracting COVID?"

The Red Cross plans to double the amount of space it allocates for each person in a congregate shelter, providing 110 square feet per person instead of the customary 50 to 60 feet. Its shelters will have isolation areas for people showing symptoms of COVID-19. Meals will be provided in prepackaged containers instead of being served buffet-style.

The need to provide extra personal space is straining coastal communities such as Brunswick County, N.C., that have no choice but to set up shelters because all of the local hotels are in an evacuation zone.

A shelter in one of the county’s three high schools that ordinarily holds 500 people would now accommodate only 100 to 200 evacuees, forcing the county to find additional shelter space, said Edward Conrow, the county emergency manager.

"For every additional shelter, that’s additional equipment we have to move and additional staffing. It’s going to be more of a cost to our county," Conrow said.

Brunswick County, with 143,000 people, is in North Carolina’s vulnerable southeast corner. Conrow is concerned that residents will ignore evacuation orders to avoid going to shelters.

"People are going to want to stay put, and that puts them in harm’s way," Conrow said.

Emergency officials concede they will face enormous obstacles convincing people to evacuate into a shelter amid reports of deadly COVID-19 outbreaks in nursing homes, prisons and shelters for the homeless.

"Congregate residential settings have been hit very hard," Monica Schoch-Spana, a medical anthropologist at Johns Hopkins University, said Wednesday during the videoconference on disasters. "People will ask, is it really safe for me to go to a shelter with a bunch of strangers, some of whom may be sick?"

An April 22 report by the federal Centers for Disease Control and Prevention about a COVID-19 outbreak in homeless shelters in the Seattle area said that "COVID-19 can spread rapidly within and between congregate housing facilities."

Gov. Ron DeSantis of Florida (R) fueled the concern when he said last week that "this virus really thrives and transmits when you have close, sustained contact with people inside an enclosed environment."

Other governors such as Kay Ivey of Alabama (R) and Laura Kelly of Kansas (D) encouraged residents to go to shelters when their states were threatened by recent tornadoes.

Kieserman of the Red Cross said people facing evacuation orders need to understand they are safer at a shelter.

"You’re better off getting out of the way of a Category 4 hurricane than waiting it out," Kieserman said. "We can give you a face mask, health care and more space in a shelter. Nobody’s going to be able to help you if you’ve been killed by the flood."