Storm-ravaged South: ‘We are close to running out of water’ 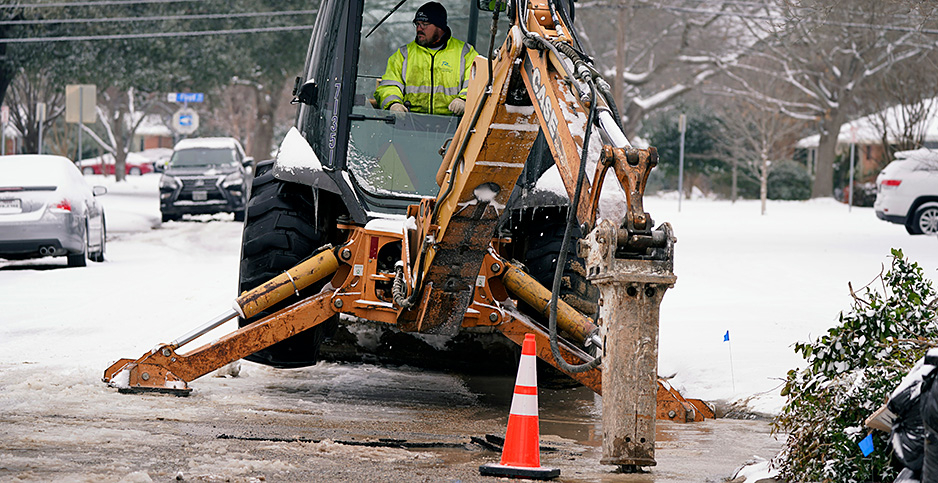 Nathan Bercy, with the city of Richardson water department, began to open access to make repairs to a water main break due to extreme cold yesterday in Richardson, Texas. LM Otero/Associated Press

The water sector, tied precariously to the nation’s power grid, continues to struggle even as power slowly returns.

The situation has become dire for hospitals, firefighters and city managers throughout the South.

Earlier this week, more than 4 million Texas homes and businesses were without power, and the state’s main grid operator said it could take days to get the electric system restored. That number is now decreasing, with under 1 million power outages reported as of this morning (Energywire, Feb. 18).

And yet the storms that have pummeled the Midwest, Texas and the South continue to force water service providers to scramble to manage flows as subfreezing temperatures present serious problems — with hospitals and airports hard hit.

In Texas alone, more than 12 million people — a little more than a third of the Lone Star State’s population — have faced service interruptions or been told to boil their water or stop using it entirely as homeowners, hospitals and businesses grapple with broken water mains and burst pipes, many in areas unaccustomed to dealing with sustained frigid temperatures.

Just yesterday, the number of those affected by boil-water notices stood at about 7 million. On Twitter, photos are cropping up of long lines in Texas of people carrying buckets and waiting to get water or melting snow for water to flush toilets after days without water.

In Louisiana, three hospitals in Shreveport lost water because of the storm, KSLA News 12 reported. City fire trucks delivered water, and officials were getting bottled water for patients and staff.

And in Lake Charles, hospitals were faced with the possibility they might have to transfer patients to other areas because of low water pressure that followed a power outage, Mayor Nic Hunter said.

Shortages are also affecting Texas. In Austin, some hospitals faced a loss in water pressure and, in some cases, heat.

"Because this is a state-wide emergency situation that is also impacting other hospitals within the Austin area, no one hospital currently has the capacity to accept transport of a large number of patients," CEO David Huffstutler of St. David’s HealthCare, which operates St. David’s South Austin Medical Center and other hospitals and medical facilities in the region, said in a statement.

Water pressure has fallen across the state because lines have frozen, and many residents are leaving faucets dripping in hopes of preventing pipes from freezing, said Toby Baker, executive director of the Texas Commission on Environmental Quality.

Gov. Greg Abbott (R) urged residents to shut off water to their homes, if possible, to prevent more busted pipes and preserve pressure in municipal systems.

Cities are also grappling with the fallout.

In Memphis, Tenn., the power and water company asked residents to reduce water usage through Friday. Memphis Light, Gas & Water said in a news release that it is experiencing reduced pressure across its distribution system due to freezing temperatures.

The utility also said it is seeing reduced reservoir levels at pumping stations and that several water mains have burst. MLG&W has asked customers to refrain from leaving water running while rinsing dishes, take short showers and hold off on washing clothes until Friday. Officials also asked customers to save water by letting faucets drip, instead of streaming water, to prevent pipes from freezing over.

"Leave your cabinet doors open to allow warm air to circulate," the city said in a tweet. "Do not try to use open flames or boiling water to thaw pipes."

In Abilene, Texas, firefighters earlier this week were hampered by low water pressure as they tried to extinguish a house fire, the Abilene Reporter-News reported. "They had to watch that house burn," City Manager Robert Hanna said at a news conference.

Leaders in Austin and the Houston area asked residents to stop dripping water from their faucets because of a drop in water pressure.

In Austin, residents were told last night to boil their water after the city’s largest treatment plant lost power. Meanwhile, the city’s fire department said it has received hundreds of broken water pipe calls since Monday. On Tuesday alone, the department fielded 685 calls about busted pipes.

And in the city of Kyle, Texas, officials have asked that all water use be suspended until further notice.

"Water should only be used to sustain life," city officials wrote in a notice. "We are close to running out of water supply in Kyle. Please take immediate action to prepare for continuous power and water outages."

Federal, state and local resources are being deployed even as outages and disruptions continue to grow.

The White House has said it’s in the process of sending generators to hospitals and water facilities, as well as blankets, water and food for the state to distribute.

In Houston, city officials and local businesses will begin distributing water, "especially for people who cannot afford to purchase" it, Mayor Sylvester Turner announced today in a tweet.