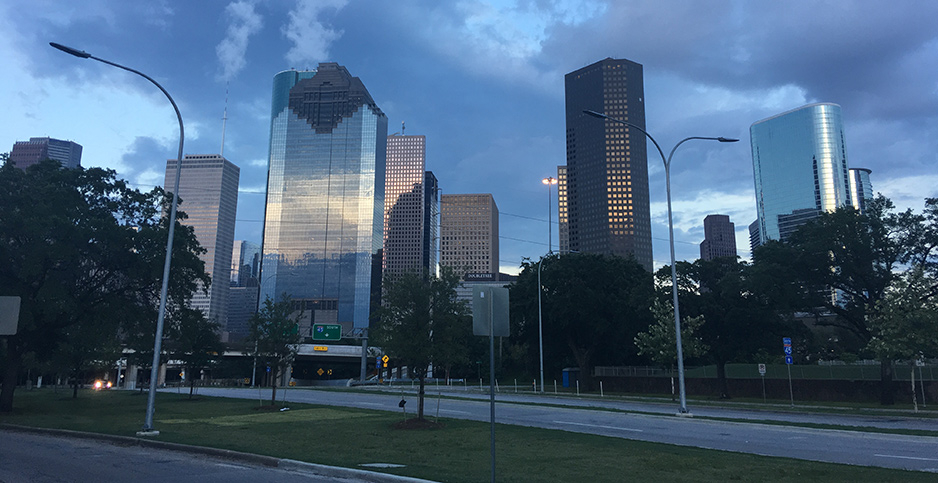 Cities are on the front lines of responding to the threats of climate change and extreme weather as action has stalled on the federal and state levels. Edward Klump/E&E News

Hurricane Florence’s imminent strike on the Carolinas has underscored for many environmentalists a frustrating contradiction in climate change policy.

Even though the southeastern United States is a magnet for tropical storms, state leaders there often lag behind other regions in preparing for global warming and the extreme weather that comes with it.

The result is that local leaders — from Austin, Texas, to Miami Beach, Fla., to Cumberland County, N.C. — are left to fill the void. It’s a situation that one climate change expert described as unsustainable in the long run.

"Cities have been given an unfair burden," said Beth Gibbons, who leads the American Society of Adaptation Professionals.

The Michigan-based group serves as a hub for information about efforts to address climate change, and Gibbons said one worry of hers is that cities and counties "don’t have the financial capacity to deal with the range of changes" brought on by rising temperatures.

At the same time, she added, municipal leaders often feel resistance from their state counterparts.

The example she cited was North Carolina’s push in 2012 to overlook scientific data that warned of rising sea levels.

State leaders worried that the prediction could lead to sky-high insurance rates, but Gibbons said that suppressing information only made it harder for policymakers to prepare for problems.

"To them, it was seen as a ban on their work," Gibbons said. "It made doing climate adaptation work in the Carolinas extremely difficult."

In spite of the headwind, inland Cumberland County recently put forward its own climate resilience plan to better prepare its residents for dangers such as droughts and downpours.

"Why are we not doing more now to preserve and improve our way of life in the Sandhills?" wrote its authors.

In Florida, Miami Beach has tried to upgrade its infrastructure to prepare for rising sea levels even as the administration of Gov. Rick Scott (R) has discouraged the use of the terms "climate change" or "global warming" in government work.

Charleston, S.C., in 2015 unveiled a plan to combat an encroaching ocean in spite of little action from state officials.

"There’s not much happening at the state level in South Carolina in terms of preparedness," said Jessica Grannis of the Georgetown Climate Center, which tracks how governments are responding to climate change.

She said it’s a similar story in Georgia — where locales such as Savannah and Tybee Island are leading the way.

But she gave credit to Louisiana, which Grannis said developed an ambitious plan in 2017 to prepare its coastline for rising sea levels.

"What was the worst case scenario under the 2012 plan, is now the state’s best case scenario based upon updated science and data on rates of land loss and sea-level rise in the region," according to an analysis by the Georgetown Climate Center.

Typically, however, there has been a disconnect between Southeastern cities and states when it comes to climate policy — a divide that mirrors other national fault lines: rural versus urban, Democrat versus Republican.

Kate Zerrenner of the Environmental Defense Fund said she’s seen that dynamic play out in Texas in the aftermath of Hurricane Harvey, which devastated Houston last year.

"Right after the storm, I thought this is going to change things," Zerrenner said. But she said Texas has fallen back into its old patterns, as Republican leaders in state government seem resistant to confront global warming.

"The elephant in the room is climate change, and state leadership is not willing to talk about it," Zerrenner said.

Liberal strongholds such as Austin have tried to do their part, but Zerrenner said the state has a critical role to play.

She pointed to a proposal that has failed to advance in the Legislature that would require certain state agencies to include climate variability in their strategic plans.

"This is a common-sense first step," she wrote recently.

But a report published this week by the U.S. Conference of Mayors and the Center for Climate and Energy Solutions made clear that patience is wearing thin. It found that 95 percent of the cities it surveyed have experienced some kind of climate impact in the last five years.

"Hurricanes Harvey, Irma, and Maria are just three examples," the group wrote. "In just one week this July, more than 30 million Americans were under flood watches in the eastern United States while 40 million faced record heat in the west."

In response, the report cited a long list of steps that cities have taken to address global warming — much of them aimed at reducing their carbon footprint.

"Why such urgency?" wrote its authors, one of whom was Steve Benjamin, the mayor of Columbia, S.C., and president of the U.S. Conference of Mayors. "The staggering property loss and damage from recent, severe weather events enhanced by our changing climate is in the hundreds of billions of dollars, and have caused significant loss of life."