Stranded in a squalid tower with flooded floors and no help 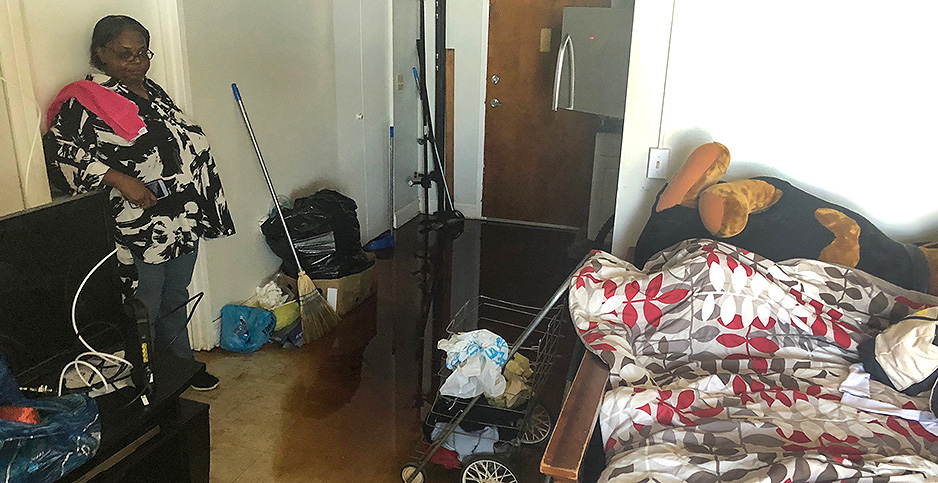 Debbie Williams of Wilmington, N.C., has to walk through a stagnant pool in her apartment. This is where she's been sleeping. Adam Aton/E&E News

WILMINGTON, N.C. — A public housing building here flooded from the top down.

On the highest floor of Solomon Towers, Debbie Williams managed to keep two things dry — her stuffed bear and her stuffed Doberman — but gave up trying to mop the dark rainwater falling from the walls and ceilings and light sockets. It just kept coming back worse.

Four days after Hurricane Florence poured into this housing project, she was still stepping through the water that had pooled around her bed. Federal and local responders were handing out supplies about a mile away, and the city’s lights were blinking back on. But help hadn’t reached the towers.

"I just want someone to come and see the living conditions that we are in," Williams said.

No officials had visited the downtown towers since the storm hit to check on the building’s elderly and infirm residents, at least six of its occupants said yesterday.

As the Carolinas catch its breath after Florence, people like Williams are stepping into the sunlight to find that they can’t leave the storm behind. The disaster stands to have a legacy of massive health and housing problems. The poor have been hit hard, and pre-existing inequalities in a region with acute poverty will almost certainly grow wider.

Research has shown that illness and death jumps in the period after a hurricane. The stress of enduring the storm can trigger problems like heart attacks, while the contaminated environment carries more chronic dangers (Climatewire, Sept. 14). And the more that climate change fuels hurricanes like Florence, the greater those problems could become, according to researchers.

"It enhances — or at least makes more visible and painful — all of the social challenges that we have," said Sarah Watson of Carolinas Integrated Science & Assessments and the South Carolina Sea Grant Consortium.

Storm shelters became a microcosm of those problems during Florence.

One man died Monday in New Hanover County’s main shelter. Although authorities have released few details and no cause of death, two people present at the time said he was an amputee, and he had recently been evacuated from another shelter where water breached the ceiling.

The bus evacuation between shelters was rough, conditions were still stormy and there hadn’t been access to showers in days, they said. The buses gathered people from multiple sites, packing them into a small space over a long period.

"It’s hot, it’s raining, we had to close the windows then open them again — the smell was horrendous," said Jason Broughton, adding that he saw people urinating into bottles.

Later, some washed themselves in bathroom sinks, but Broughton had pictures of others bathing in waist-high floodwaters. Raw sewage and other toxins pose risks to anyone who touches the water.

Shelter crews seemed overwhelmed, many said. Staff tried to make people comfortable — at one point gently laying blankets on sleeping evacuees — but the circumstances were hard to overcome, residents said.

"It’s a major catastrophe unlike anything Wilmington’s ever seen," Broughton said Monday, adding that it "rivals the aftermath of [Hurricane] Katrina, on a smaller scale."

Others also saw parallels with that 2005 disaster and its racially skewed impacts.

Standing in line for Federal Emergency Management Agency aid, Doretha Williams, 57, said the poor part of town where she lives is struggling more than the wealthy beach-side areas where she works.

"All the projects don’t have no lights, that’s why [some people] are looting and acting like fools. We can’t afford generators, they should have come and turned the lights on at our place first," she said.

Those suspicions — that neighborhoods with poor, black residents fare worse after storms — are understandable, said Bob Mann, the communications director for Louisiana Gov. Kathleen Blanco (D) during Hurricane Katrina. Decisions about where to prioritize repair work are often based on a neighborhood’s technical characteristics, not its demographics, but the result can be the same: People in nicer houses often get their power turned on first.

Wealthier, whiter areas tend to have newer infrastructure that’s more resilient to storms and easier to repair. So responders can power up more houses — and make their statistics look better — by starting work in more affluent areas before moving to the harder repairs in older neighborhoods, Mann said in a telephone interview.

"There was some talk [after Katrina] that it shined a light on the poverty that was already there. But all that light and exposing didn’t alleviate one person’s suffering. It just showed us what was already there and we had just been ignoring," said Mann, who’s now a professor at Louisiana State University.

In Solomon Towers, residents felt ignored — and it started before the storm.

The towers flooded through the roof because maintenance problems have been overlooked for years, said David Ragin, the former president of the Solomon Towers residents’ organization.

"I’ve been here eight years, and I’ve seen the same conditions swept under the rug again and again," Ragin said.

Generators kept the hallways lit and an elevator running in the days after Florence, but the building’s apartments had no power. Trash hadn’t been picked up, and the stench of spoiling food was overpowering in some rooms.

"OK, take a deep breath," said Terry Green before opening her front door. After a minute, the smell from her refrigerator sent three people retching into the hallway, where the floor was covered in rust-colored water.

"My feet are itching so bad from being wet," Green said. "They need to put us somewhere, because we can’t live here until it’s fixed. And they take their sweet baby time about fixing things."

Residents watched utility trucks and government vehicles pass by for days without stopping — probably on their way to the rich neighborhoods, they said, swapping rumors about the places they suspected already had air conditioning and television.

At a press conference yesterday, Woody White, the chairman of the New Hanover County Commission, said he hadn’t heard about the conditions at Solomon Towers but promised that would change. He also rejected the notion that authorities were giving more attention to wealthier areas.

"I can’t imagine that — what I have observed is that wealthy, poor, people of every size, shape and color have been experiencing the same difficulty and are all rising to the challenge with the same optimism of recovery," he said. "But if [there’s] need, we want to know about it."

A few hours later, police cruisers idled outside the Solomon Towers and crews had begun vacuuming out the filthy water.

Standing in the lobby with a handful of belongings, Williams said it was a welcome change, but it only came "after we did all this hell-raising."

She has little faith the attention will last and worries that staying in her flooded apartment could make her sick. She’s planning to move as soon as she finds somewhere else.

Until then, she and her stuffed animals will keep sleeping beneath the leaky roof.