Strange bedfellows prep for ‘big fight’ with Perry on Hill 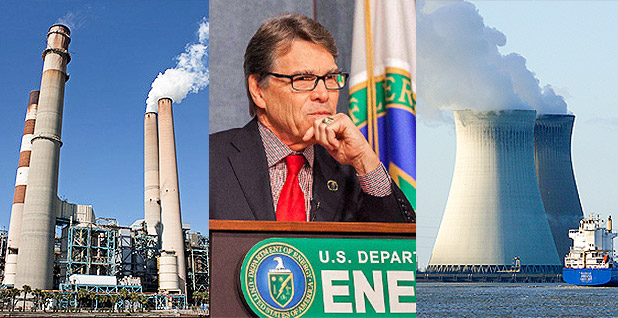 A growing list of powerful lobbying groups — from big oil and gas to wind and solar — appears to be headed for a "big fight" on Capitol Hill as Energy Secretary Rick Perry arrives today to defend his proposal to boost coal and nuclear.

Almost a dozen large groups huddled last week, an alliance of strange bedfellows usually at opposite ends of the energy spectrum, to share notes and talk future action as Perry’s request moves quickly to the Federal Energy Regulatory Commission for action.

Everyone aside from the coal and nuclear sector, that is.

While attempting to remain neutral, Republican Rep. John Shimkus of the nuclear-heavy state of Illinois said there’s a "big fight" looming over Perry’s request for a FERC rule, just as there has been debate on the state level to shore up struggling reactors in his home state and New York.

"I’ve seen this play out in Illinois when Illinois did it for the nuclear power plants recently," Shimkus said during an interview yesterday.

"But [Illinois] didn’t do it a couple years ago for a new coal gasification plant because the manufacturers weighed in and said, ‘No, low-cost energy is what we need.’ So the jury’s out," he said. "I’m kind of interested in seeing how that plays out."

Lobbyists agree the battle lines are being drawn as Perry heads to the Hill, a day after FERC rejected pleas for more time to digest the Department of Energy proposal.

A number of groups concerned with the DOE request gathered last week at the Electric Power Supply Association’s Washington, D.C., headquarters. In attendance, according to a source who attended but asked to remain anonymous, were members of trade groups representing the solar and wind lobby; interstate natural gas pipelines; energy storage; and the American Petroleum Institute, the largest U.S. oil and gas lobbying group.

Noticeably absent were representatives of the coal and nuclear industry that stand to benefit under Perry’s rulemaking request to FERC.

The loose coalition — which could become more formal and even prepare legal challenges in the future — is also coordinating with a lobbying group representing operators of the nation’s factories and industrial plants — the Industrial Energy Consumers of America, which recently called on Congress to intervene, the source said (E&E Daily, Oct. 11).

While other entities like the Edison Electric Institute are staying neutral, the meeting attendee said participants expressed frustration about DOE "upsetting the apple cart for narrow interests" with little notice and discussion.

"It would be a powerful coalition to bring suit in the D.C. Circuit if this [notice of proposed rulemaking] ever gets that far, which we all hope and pray doesn’t happen," the source said.

At least one former member of President Trump’s own transition team is working solo for now. Tom Pyle, president of the Institute for Energy Research, pointed to a blog post his group published yesterday critical of the DOE proposal, calling it "excessive and unnecessary" and "government favoritism for Secretary Perry’s preferred generation sources."

When asked about the forming battle lines, Pyle replied, "Of course camps are forming, that’s what happens when you tee up a regulation where in the end somebody wins and somebody loses."

Exactly how persuasive these groups will be at FERC and on Capitol Hill remains to be seen.

Shimkus, a member of the House Energy and Commerce Subcommittee on Energy, as well as the chairman of the Subcommittee on Environment, said there are fundamental questions about what constitutes a "baseload" power plant, something Perry in his request laid out as having 90 days’ worth of fuel on-site.

"In the old days under monopolies baseload was the generation facility to meet a base of demand," Shimkus told E&E News. "People can’t even define it anymore, it’s defined differently by all these different folks, and if you’re in an RTO [regional transmission organization] system, is there still baseload needs that should get a premium? That’s the whole debate. Perry says yes."

Also appearing noncommittal on Perry’s proposal was Energy Subcommittee Chairman Fred Upton (R-Mich.). Asked about criticism the plan tilts the scales toward nuclear and coal facilities, Upton yesterday signaled it will be a topic of discussion.

"I don’t know what he’s going to say, but those are going to be some of the questions I ask him tomorrow," Upton told E&E News.