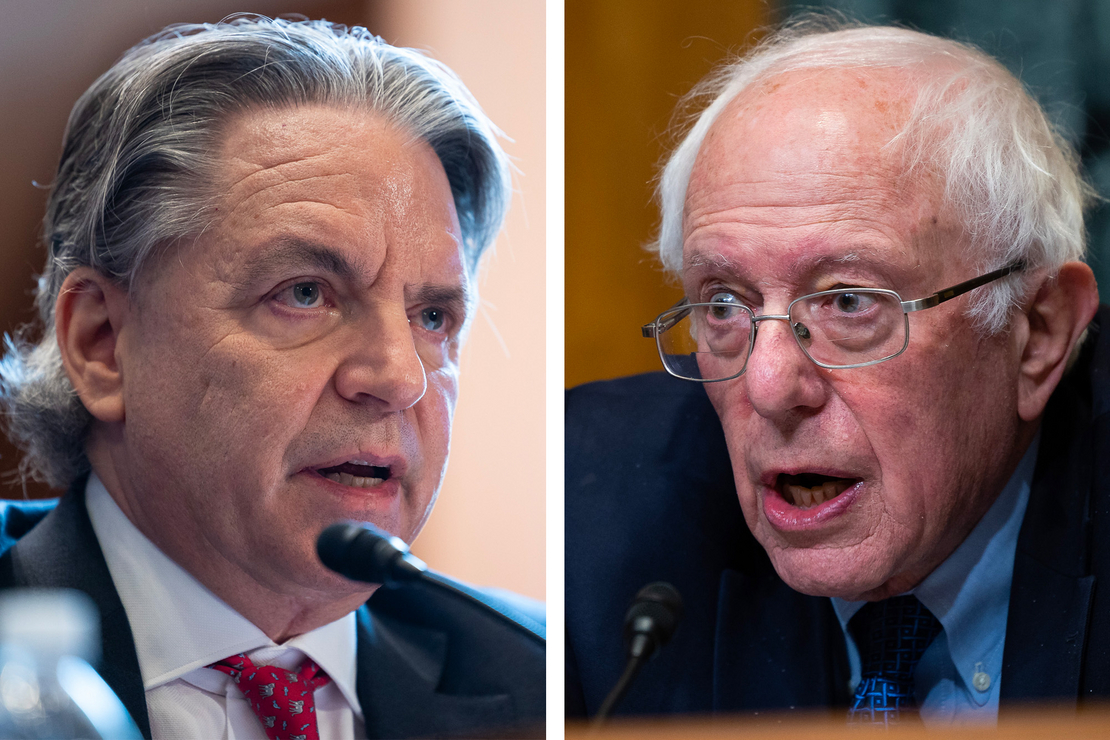 Bernie Sanders was adamant: A key EPA nominee wouldn’t get his vote unless the senator got assurances from the agency that virtually all of a $7 billion pot of money be used to further the spread of residential solar power.

At a Tuesday meeting of the Senate Environment and Public Works Committee, the Vermont independent insisted that Congress had intended for the Inflation Reduction Act, which ladled out the $7 billion for zero-emission technologies, “to make it more affordable for low-income and working-class homeowners to install solar on their rooftops and save money on their electricity bills.”

Then he made an ultimatum: Absent a written endorsement from EPA of his interpretation, he would withhold support for Joseph Goffman to lead the agency’s air office should it come to a vote before the full Senate in the coming weeks.

Such a threat would further jeopardize Goffman’s nomination in the evenly divided Senate. Already, President Joe Biden’s pick to head the Office of Air and Radiation has endured withering questions from Republicans. The committee had previously canceled multiple votes on his nomination. The standoff also portends future clashes on implementation of Democrats’ signature climate law.

“I would expect there to be many opinions shared with the EPA as they are doing this,” Shannon Baker-Branstetter, director of domestic climate and energy policy at the Center for American Progress, a liberal think tank, said in an interview.

The $7 billion allocation singled out by Sanders is part of a larger $27 billion Greenhouse Gas Reduction Fund created by the act. Within the mammoth climate and clean energy law, $369 billion in all, the fund is the Inflation Reduction Act’s largest direct investment, Baker-Branstetter said.

Aside from a few broad constraints, how the money will be spent is largely left up to EPA. While the fund must be used to reduce emissions of greenhouse gases and other pollutants mostly to the benefit of low-income and disadvantaged communities, “there are a lot of decisions that need to be made that are really important” in shaping the program, Baker-Branstetter said.

EPA is already seeking public comment on the program’s design and implementation, with a cutoff for feedback set for Monday (Greenwire, Oct. 21).

Among the questions that agency leaders want to answer include: what types of projects should come first? Who should be eligible for funding? What are the best yardsticks for measuring results? They then plan to release further guidance next year, spokesperson Khanya Brann said in an email.

The amount of money in play is almost three times the size of EPA’s base budget for fiscal 2022; the funds are almost all supposed to be doled out by September 2024.

The potential pitfalls are equally huge, with agency Inspector General Sean O’Donnell on high alert to the risk of waste and abuse. Between the money allocated in the Inflation Reduction Act and the dollars included in a previously enacted infrastructure measure, EPA “will help lead the nation in one of the largest infrastructure investment programs in our history,” O’Donnell wrote in a report released this week. The agency, said the IG, “must effectively manage these funds to achieve the intended results” (Greenwire, Nov. 29).

As the Inflation Reduction Act reads, the $7 billion is to be used for grants and other forms of financial help “to enable low-income and disadvantaged communities to deploy or benefit from zero-emission technologies, including distributed technologies on residential rooftops, and to carry out other greenhouse gas emission reduction technologies” as deemed appropriate by the EPA administrator.

Sanders, a fervent advocate for solar energy, nonetheless says that his narrower interpretation is what lawmakers intended. The money was not added to the act “for nuclear, electric vehicle charging stations or any other type of energy,” he said at Tuesday’s EPW meeting.

While voting to advance Goffman’s nomination, Sanders said he would not back it on the Senate floor until obtaining EPA’s written commitment “that it will implement this program primarily to expand residential solar throughout this country.”

EPW Chair Tom Carper (D-Del.) acknowledged Sanders’ concern. “This is one that’s important to me, and we’ll continue to work with you,” Carper told Sanders.

A Sanders spokesperson did not reply to emails requesting the senator’s communications with EPA on this topic as well as further evidence to support his view of the act. Asked whether EPA disagreed with that reading, Brann, EPA’s spokesperson, reiterated the agency’s commitment to working with Sanders on implementation of the legislation.

On Tuesday, the 20 EPW members split 10-10 along party lines on his nomination (Greenwire, Nov. 29). The deadlock means that it will take a special maneuver by the full Senate to discharge the nomination from the committee.

With the Senate also evenly divided between Democrats and Republicans, a single Democratic defection could sink that bid in the 117th Congress that goes out of business early next month.