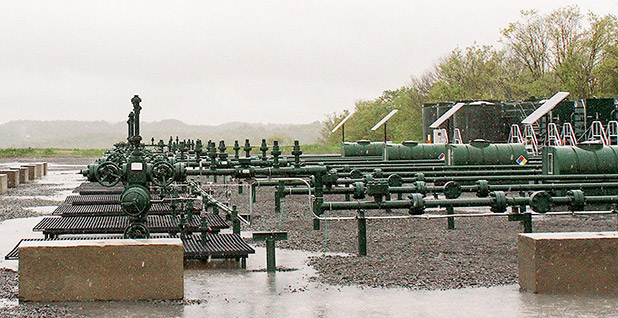 Two new studies are challenging common assumptions about natural gas production with repercussions in the "billions of dollars."

One paper from a Massachusetts Institute of Technology team found technology advances with fracking and drilling are not playing nearly as large a role as thought in boosting oil and gas production from shale.

Technology’s role has been overstated by as much as 50 percent, and the recent boom is more due to companies increasingly targeting the best areas of basins, it said.

That suggests future production projections that hinge on technology advances — including those from the Energy Information Administration — may be far overestimated. Extraction costs also may be higher than expected.

As prime drilling spots get used up over time, technology may not be able to counter the loss in productivity from shifting to less desirable locations, said Francis O’Sullivan, director of research at the MIT Energy Initiative and co-author of the paper published in Applied Energy and highlighted this week by the university.

"We need to be careful not to assume that we will have an abundance of low-cost oil in the future. We may not have the same acreage left to drill in the future, so U.S. resources may not be as economical as some have thought," said O’Sullivan.

The study also raises questions about whether companies are wrongly investing on new technologies, such as new well designs.

"Companies make bets based on the assumption that technology can deliver certain productivity levels. There are billions of dollars at stake," said O’Sullivan. Companies are "better off spending more on good acreage," he said.

Even so, the findings are likely broadly applicable to other unconventional oil and gas plays, said Justin Montgomery , co-author and doctoral student in MIT’s Department of Civil and Environmental Engineering.

Margaret Coleman, team lead in exploration and production analysis at EIA, said the study "makes some valid points." The EIA is always looking for ways to improve modeling, and "we appreciate the work of these authors," she said.

Coleman noted the agency is responsible for projections 25 years into the future that account for gas areas not currently active, in addition to areas like the Williston Basin.

The second study, released this week in Nature Energy, provides an unprecedented cradle-to-grave analysis of the land footprint of natural gas electricity, according to researchers from Johns Hopkins University, the University of Calgary and the National Renewable Energy Laboratory.

In a surprising discovery, they found the land-use needs of natural gas to be similar to wind and solar production, at least in some locations.

That diverts from a common argument that renewables require large land tracts and more space than fossil fuels, said Sarah Jordaan, assistant professor of energy, resources and environment at Johns Hopkins and co-author of the study.

Natural gas "can be comparable, and in some cases if best practices are not employed it can be greater than specific renewable energies" in terms of the land footprint, said Jordaan. More research is needed to make definitive comparisons between fuels, she said.

Previously, it was unclear how much land natural gas required from wellhead to power plant, since evaluations typically considered only one aspect of the supply chain or were based on estimates rather than actual physical measurements.

Garvin Heath, a senior scientist at NREL, said land use has not been thoroughly studied with nonrenewable resources partly because there are more steps in the chain.

More accurate data could lead to better assessments of everything from gas impacts on wildlife to property values, said Joseph Fargione, North American lead scientist at the Nature Conservancy in an accompanying article in Nature Energy. He noted that surface use agreements for oil and gas can require that land-use impacts be minimized, for example.

Although natural gas is associated with drilling, power plants required the greatest amount of land, along with processing facilities and gathering lines. Those are the low-pressure lines to transport gas from production site to collection point.

Research suggests reducing right of ways for gathering lines from 50 to 25 feet would lower the land footprint by almost half, Fargione said. Increasing the number of wells on a pad could cut land needs by more than 60 percent.

Researchers determined the land footprint using satellite images of a seven-county area of the Barnett Shale, combined with state data on production, processing and transport. The studied area produces 98 percent of the Barnett’s gas.

In total, natural gas required about 0.62 square meters (6.67 feet) of space per megawatt-hour of power. While that applies to the Barnett, the team developed a formula that could be replicated and used to estimate the land footprint of other fuels like coal and nuclear.

Extrapolated out to midcentury, the data indicate that some 80,000 square kilometers (31,000 square miles) of space eventually may be needed to meet U.S. natural gas demand, said Fargione.

The Electric Power Research Institute and the Department of Energy provided funding for the land-use study.