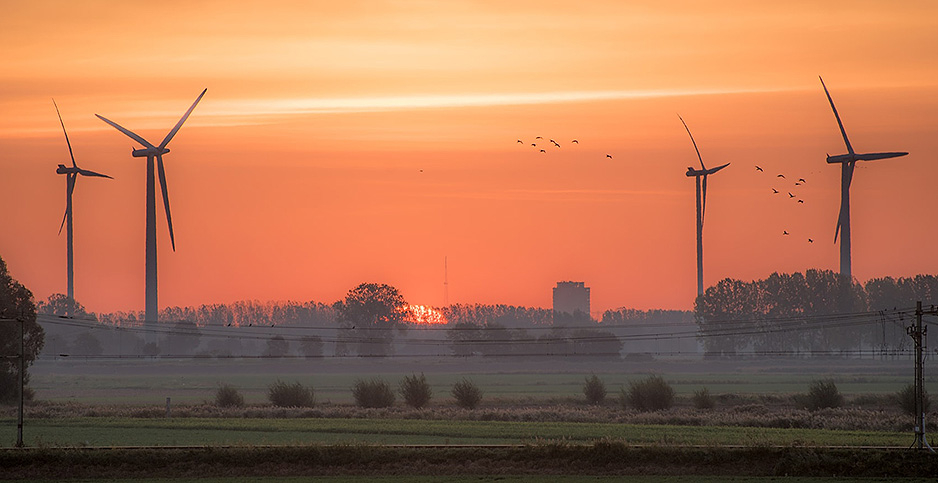 A Norwegian study found a 72% drop in bird deaths at a wind farm by painting one of a wind turbine's three blades black. Peter Franken//@peterfrankenseppe/Unsplash

Painting one of a wind turbine’s three blades black led to a dramatic decline in bird mortality along the Norwegian coast, new research shows.

Bird death from turbine collisions dropped by 71.9% where a turbine blade was black, compared with unpainted turbines at the same wind farm, according to findings published last month in the peer-reviewed journal Ecology and Evolution.

Researchers observed a nearly 50% reduction in mortality from collisions involving towers with a single black blade.

Bård Stokke of the Norwegian Institute for Nature Research, one of the study’s lead authors, said the findings could address the evolving wind industry’s Achilles’ heel, its impact on birds.

"Our hope is therefore that these measures, given their positive effects on birds and the fact that they are relatively simple and low cost, will be used in future wind energy developments both in Norway and abroad," he said in an email.

The study was conducted at the Smøla wind farm, a flat, marshy area along Norway’s west coast. When completed in 2005, the 68-turbine wind farm was one of the largest onshore facilities in northern Europe, Stokke said.

Over 10 years, trained dogs found nearly 500 dead birds at the base of turbines, killed by collision with blades or with the towers, he said.

The data shows two species in particular were being killed at higher rates: willow ptarmigan, which were colliding with the base of the turbines, and white-tailed eagles, which were flying into the blades.

So researchers asked a simple question: How can we reduce bird-turbine collisions?

The team found a 2002 University of Maryland laboratory study showing a single black blade could reduce bird impacts. So the northern European researchers began a field experiment at Smøla in 2013 using four painted turbines as their study subjects.

Researchers said birds appear to be more aware of what’s happening to their right and left when flying through a "perceived" open air space, like a wind farm. They are watching for movement that denotes predators and prey along their laterals and below them.

The blurred motion of moving wind blades directly in front of them doesn’t appear as an obstruction.

But when researchers at the Norwegian Institute for Nature Research and the Lake Ånnsjön Bird Observatory in Sweden painted a single black blade out of three on a rotor,i t reduced "motion smear" providing birds a visual cue of an obstacle to evade.

"We have no knowledge of anyone testing the ‘motion smear’ hypothesis in the field," Stokke said. "That being said, it may well be that other research teams are underway with such experiments without us knowing about it."

The smear effect isn’t unknown to U.S. birders, and paint variations have cropped up in studies before, said Garry George, director of the National Audubon Society’s Clean Energy Initiative.

But the Norwegian study has instigated tremendous chatter in the U.S. over how to take the research further.

"We’re very excited about this," he said, but didn’t necessarily see it as a silver bullet.

The simple question posed by their study addresses a fairly complicated problem: tremendous physiological variety among birds and remaining mysteries about how they perceive the world, he said.

"So many different species of birds have different ways of seeing things," he said. "We don’t know what they see."

Mortality by collision with rotor blades and turbine towers has at times been weaponized against the industry by critics in the fossil fuel sector or bird advocates. It is at times highly political.

President Trump is known to draw attention to bird death in his occasional off-the-cuff criticisms of the wind industry. Earlier this month, he told Fox News’ Sean Hannity that he liked wind except for its "tremendous environmental problems," like bird death.

The rapidly expanding wind industry kills roughly 250,000 birds annually in the U.S., according to Fish and Wildlife Service estimates.

The American Wind Energy Association notes the FWS estimate represents 0.01% of human-caused bird death. Mortality for birds is far greater from power lines, oil wastewater pits and domestic cats. But the wind sector is growing, hitting 7% of the country’s power load last year, and is often lifted up for its environmental benefits compared with fossil fuel power.

Norwegian researchers said their findings could be a cost-effective way to mitigate bird mortality as the sector grows, and it should be repeated at scale — their study was only with four painted turbines — and replicated elsewhere to observe how the findings compare at different sites and with different bird species.

But the Norwegian researchers said they’re optimistic their collaboration with regulators, government entities and the wind industry will have a long-term positive impact on protecting birds.

The study’s narrow findings, however — four turbines over 3 ½ years — are reason for caution, said Shawn Smallwood, a California ecologist and expert in bird mortality from energy infrastructure. While the Smøla study is valid, he said, its scope is limited.

"One cannot expect this solution to reduce fatalities of most other bird species because many causal factors contribute to avian collision mortality with wind turbines," he said in an email. "Many birds, for example, collide with wind turbines at night, when tower colors are irrelevant."

"Further study is needed before we know if changes in wind turbine coloration would be an effective strategy, and there are a number of technical and regulatory considerations that would also need to be addressed," he said.

If the Norway study’s success is replicated elsewhere, painting turbines or blades could still be a tricky jurisdictional issue in the Unites States.

The color of turbines is strictly regulated by the Federal Aviation Administration, which permits a light gray as the darkest allowable paint hue.

White and gray-colored turbines, FAA says, have proved the most conspicuous for human aviators.

The original version of this story misstated the definition of "motion smear."