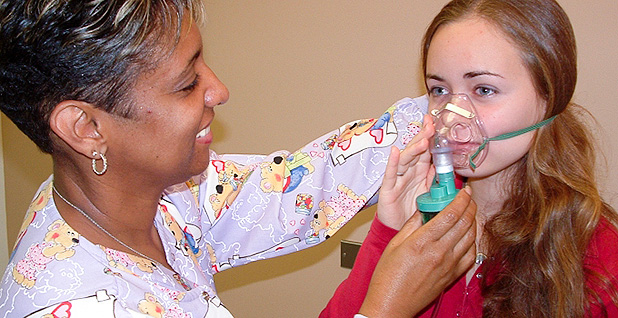 More than one-quarter of asthma-related emergency room visits worldwide may stem from breathing dirty air, according to one study released today, while another paper links long-term exposure to fine particulates to an increased risk of developing chronic kidney disease.

Asthma, which inflames and narrows lung passageways, is the world’s most common chronic respiratory disease, afflicting an estimated 358 million people. For the first paper, researchers sought to quantify ER trips from asthma attacks triggered by inhalation of ozone, fine particulates or nitrogen dioxide.

They found that 9 million to 33 million such visits in 2015 were attributable to exposure to one of those pollutants. The bulk were tied to ozone inhalation, with fine particulates accounting for almost all of the rest.

About half the estimated emergency room trips occurred in India, China and other Asian countries with notoriously severe pollution problems.

Overall, there were 116 million asthma-related ER visits that year, meaning that pollutant exposure could have helped trigger as many as 28 percent of those trips.

While air quality in the United States is much better, the study linked exposure to ozone to as many as 21 percent of total emergency room visits. The study blamed particulate matter for up to 11 percent.

In all, researchers covered 54 countries and Hong Kong. The findings suggested that "policies aimed at cleaning up the air can reduce the global burden of asthma and improve respiratory health around the world," Susan Anenberg, a George Washington University professor who was the lead author, said in the release.

Also working on the study were researchers from EPA and about a dozen other organizations.

Researchers found a "robust" connection between fine particulate exposure and the odds of developing the disease even after accounting for the potential impact of diabetes and other risk factors.

While the reasons for the connection are unclear, the paper notes other research has found that fine particulates may contain heavy metals and cause "systemic inflammation."

"Our findings support the global strategies of air pollution reduction to prevent CKD development," they wrote.

Fine particulate matter is technically known as PM2.5 because it is no wider than 2.5 microns, or one-thirtieth the width of a human hair.