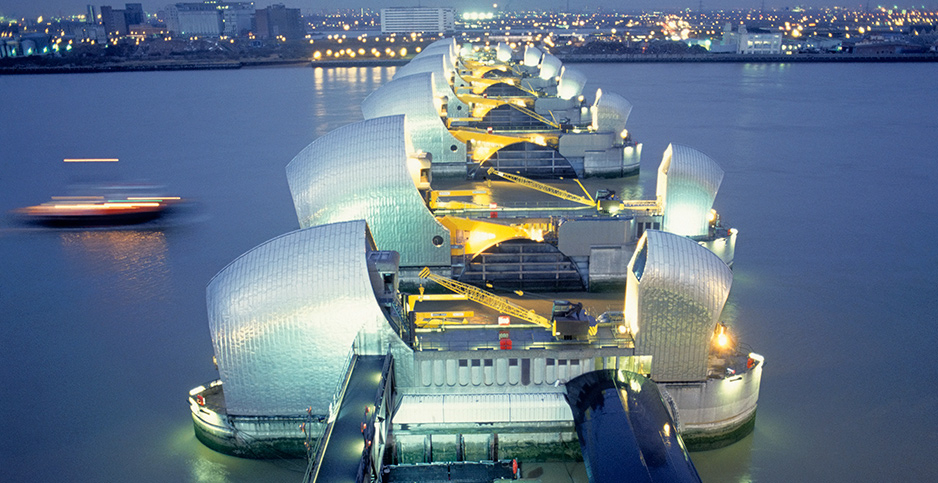 The Thames Barrier in London was built to defend against flooding. A new study finds that cities around the world could change dramatically due to climate change. Photography/Photosh/Newscom

In the midst of a record-breaking heat wave that swept across Europe last summer, Jean-François Bastin was sweltering on a rooftop in his hometown of Brussels, Belgium. It was July 2018 — the middle of what would turn out to be Belgium’s hottest summer on record — and Bastin’s thoughts couldn’t help but turn to climate change.

"I was dying on the roof of the apartment where I was," he told E&E News. "I was thinking that this was not normal for Brussels."

Bastin, an ecologist at Swiss university ETH Zurich, had been studying the effects of climate change for a decade and still felt "very stressed" by the event. He began to think about whether other people — those less immersed in the science of global warming — were also confused about the changes taking place in their own cities and how he could help communicate what was happening.

A year later, Bastin and other colleagues from ETH Zurich have published the results of those efforts. Their new paper, out yesterday in the journal PLOS ONE, provides a global look at the ways the world’s major cities will change with just a few degrees of additional warming.

In an effort to present the findings in an easily understandable context, the results are framed as comparisons between recognizable cities. By the year 2050, for instance, the study suggests that Seattle will shift to a climate more similar to present-day San Francisco. Madrid will more closely resemble present-day Marrakesh. London will start to feel like Barcelona. Stockholm will become like Budapest.

The researchers focused their efforts on 520 major cities worldwide. For each city, they compiled data on a series of 19 variables related to both temperature and precipitation — monthly extremes for rainfall and heat, yearly average temperatures and precipitation, and so on. Then, they used models to investigate the ways these variables might change under a scenario assuming moderate climate change, or around 3 degrees Celsius of warming over the rest of the century.

After noting how each city is expected to change, the researchers then used a special statistical method to compare future cities with present-day cities. They found that 77% of all the cities investigated will become statistically more similar to some other location than to their present-day conditions by the year 2050.

And among the cities of the future, 22% will develop a "novel" climate — that is, the combination of temperature and precipitation patterns will be unlike anything currently experienced on the planet. In the United States alone, 17 cities are expected to develop a novel climate. Washington, D.C.; Pittsburgh; Boston; Las Vegas; Atlanta; and St. Louis are among the mix.

The researchers have published an interactive map online of all the cities they investigated.

The study reveals some broad patterns. In the higher latitudes, many cities will experience dramatic shifts in temperature. In European cities, for instance, the study suggests that summers may warm by an average of 3.5 C, and winters by 4.7 C. In general, cities across the Northern Hemisphere may begin to resemble cities an average of more than 600 miles to the south.

Cities closer to the tropics, on the other hand, are more likely to experience changes in precipitation patterns, often marked by a shift toward a drier climate. Tropical cities are also more likely to shift to novel climates than cities in other regions of the world.

A tool for communication

The researchers believe the new study is the first to take a global approach to this type of comparison among present and future cities. But others have conducted similar analyses on a smaller scale.

In February, for instance, researchers Matthew Fitzpatrick of the University of Maryland Center for Environmental Science and Robert Dunn of North Carolina State University published a climate mapping project focused on 540 North American cities (Climatewire, Feb. 13). The methods weren’t exactly the same — Fitzpatrick and Dunn used a smaller set of climate variables than the new study, and they also examined both a moderate and a severe climate scenario, projected out to the year 2080.

But the general takeaways were similar. U.S. cities will begin to resemble other locations hundreds of miles to the south. And some cities will develop unprecedented climates not currently experienced in North America at all.

The North American study was driven by similar motivations as the global one, according to the authors. They saw a need for a clearer, more digestible way to communicate to the public the changes that are happening in their own backyards.

The new study’s global approach could potentially help city planners brainstorm ideas for climate adaptation efforts, Bastin suggested. London, for instance, could look for inspiration to Barcelona, which has already experienced its share of problems with water shortages. In recent years, the Spanish city has adopted a series of water-saving public initiatives.

But the main inspiration for the study was to communicate with the general public, Bastin added.

"Even if you try to make a very serious scientific analysis, my aim was to aim for communication and to try to give the opportunity for anyone to have a better grasp on climate change," he said.