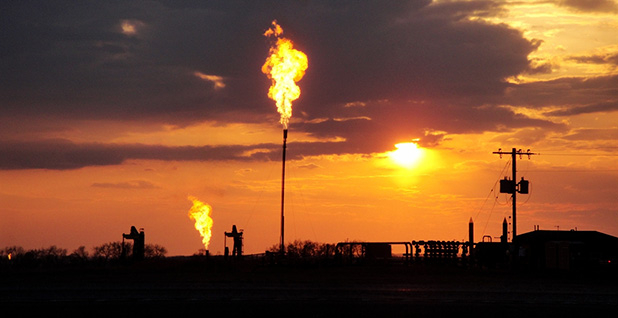 Oil and gas facilities in the south-central U.S. are releasing twice as much methane than federal estimates suggest, according to a new study. Jeff Peischl/NOAA

Methane emissions from the oil and gas sector in the south-central United States are nearly two times higher than inventory estimates from EPA, according to new research from Pennsylvania State University.

The study, published in the journal Geophysical Research Letters, used data collected from six flights across the Midwest, where researchers flew through concentrated methane plumes formed during weather fronts. Researchers measured the methane — a greenhouse gas with up to 35 times the warming potential of carbon dioxide — at its endpoint in the atmosphere using a top-down approach, the paper said.

Zachary Barkley, a Penn State researcher in meteorology and atmospheric science and paper co-author, said when a cold front occurs, a draw of warm air comes up from the south, pulling with it methane emissions from oil and gas as well as animal agriculture. Those emissions converge into identifiable plumes along frontal boundaries, which the Penn State researchers studied using equipment aboard NASA aircraft.

Barkley and his colleagues then fed data from the methane plumes into weather models and compared their findings with EPA’s inventory.

"Oil and gas emissions are currently being underestimated, and they are likely the largest source of human-made methane emissions in the U.S.," Barkley said.

The south-central region was chosen because it accounts for nearly 40% of man-made methane emissions in the United States, the paper said, and includes major oil and gas basins such as Anadarko, Eagle Ford, Fayetteville, Haynesville, Permian and Barnett. The study examined emissions in Arkansas, Texas, Louisiana and Oklahoma.

Estimates from EPA use a bottom-up approach, where an average emission rate is drawn based on measurements at a certain number of wells or facilities and then multiplied to construct a national picture. One issue with that approach, authors said, is the potential of missing outliers that could be leaking more methane than the sampled sources.

An EPA spokeswoman said the agency was looking forward to reviewing the study.

Every year, EPA prepares the Inventory of U.S. Greenhouse Gas Emissions and Sinks, which "provides a comprehensive accounting of total greenhouse gas emissions for all man-made sources in the United States," according to the agency’s website. In the compilation process, EPA assesses new studies for data that could inform inventory updates.

Barkley said there are issues with a top-down approach — like not being able to pinpoint a specific methane-emitting source — but that the method does help identify areas to target for greenhouse gas reductions. He said the bottom-up approach is still needed to measure individual facilities in order to seek out high-emitting outliers.

EPA uses a bottom-up approach, Barkley said, because it needs a method that can be applied nationwide to calculate emissions.

David Lyon, a scientist at the Environmental Defense Fund who studies methane and emissions inventories, said low estimates of methane emissions from the oil and gas sector contribute to parallel underestimates of the adverse effects of emissions and the potential benefits of regulations.

"The more we understand the emissions, I think the better we can help stakeholders, including the oil and gas companies, to do things to reduce those emissions," said Lyon, who did not take part in this research.

While it’s common to study methane emissions via aircraft, the Penn State research is unique because it uses very large flights, rather than a smaller flight around a specific basin, Lyon said. He said it’s a "clever, novel approach" to use storm front boundaries to measure the concentrations of methane and quantify emissions from such a large region.

Barkley said the flights covered distances of 400 to 500 miles.