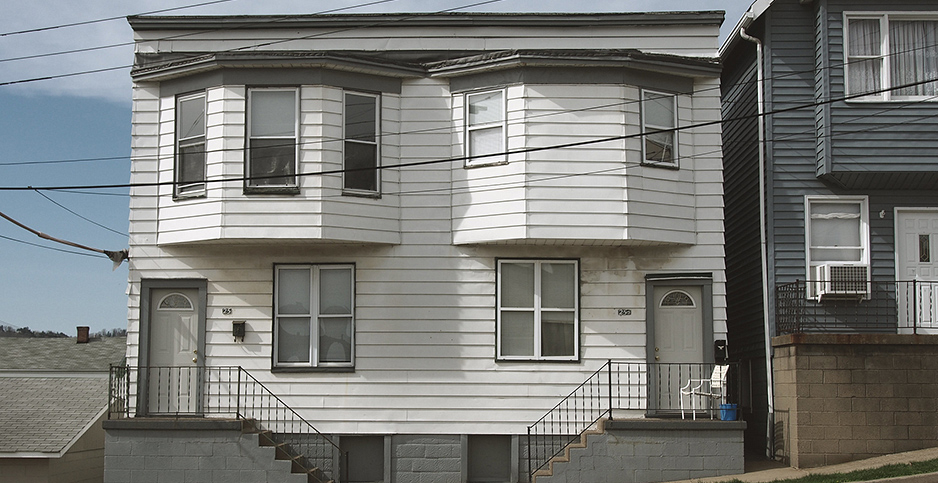 To help reduce energy consumption and emissions from the buildings sector, policymakers should try to incentivize more multifamily homes and work to reverse trends in the U.S. toward bigger houses, according to a new study. A duplex home is pictured in West Virginia. David Kent/Flickr

Americans’ preferences for bigger houses and wider use of air conditioning could drive up energy consumption and greenhouse gas emissions from U.S. residential buildings, even with a continued trend toward carbon-free electricity, according to a new study.

Researchers at the Yale School of the Environment assessed energy consumption and emissions from residential buildings between 1990 and 2015, according to a university statement this week. They considered the energy and emissions impacts of trends in average household size, floor area per household, access to residential cooling and "fuel switching," such as from natural gas to electric heating.

Greenhouse gas emissions from the residential sector have decreased by 2% per year on average since having peaked in 2005. But trends toward larger single-family homes and smaller household sizes could soon cause emissions to creep back up, concluded the study in Environmental Research Letters.

"To achieve more ambitious emission reductions in the coming years and decades, floor space per person needs to definitely stabilize or perhaps decrease," said Peter Berrill, a doctoral student in industrial ecology at Yale and the paper’s lead author. "This can only really happen if average size of new construction decreases quite a lot."

More widespread access to cooling as well as lagging energy efficiency upgrades at aging homes could also drive up emissions from the residential sector, the researchers said. Carbon-free electricity and initiatives to build all-electric homes, which environmental groups say could help reduce building emissions, might not be enough to ensure that the U.S. reaches net-zero emissions by 2050 as recommended by the Paris climate agreement, the study said.

To move toward carbon-free homes, lawmakers should also prioritize energy efficiency upgrades in old housing stock, according to the study. Identifying ways to incentivize more multifamily housing and smaller homes would help as well, said Kenneth Gillingham, an associate professor at the Yale School of the Environment and a co-author on the study.

For example, if all single-family homes in the U.S. were converted to multifamily homes, energy demand per household would fall by up to 47%, the researchers estimated. The commercial and residential sectors account for about 13% of the country’s greenhouse gas emissions.

The Biden administration has shown an interest in curtailing single-family zoning to help build more affordable housing and reduce racial segregation in cities and towns. President Biden’s proposed infrastructure plan calls for the establishment of a new grant program that would award funding to communities that worked to eliminate "exclusionary zoning," such as local ordinances that ban multifamily homes or set minimum lot sizes.

The U.S. tax code is currently set up to favor single-family, detached homes, though multifamily homes are more energy efficient, Gillingham said. Average household size in the U.S. has increased by more than 1,000 square feet since 1973, according to the American Enterprise Institute.

"It’s not that we’re saying that we’re not going to let people live in detached homes, but … should we be incentivizing building stock that’s less efficient and leads to worse climate outcomes?" Gillingham said.

Critics of efforts to build smaller homes and more multifamily homes say they could reduce property values or change the character of neighborhoods. Leading up to the 2020 elections, former President Trump accused Democrats of trying to "abolish" the suburbs over their support for policies that would make it easier to build multifamily affordable housing.

While any initiatives that take aim at housing size and type are likely to rile critics, framing the topic as a housing affordability issue in addition to an energy and climate one could help make potential policies more politically acceptable, Berrill said.

"Allowing more types of housing to be built would help with affordability as well as environmental sustainability if that resulted in more smaller housing typologies being built," he said.