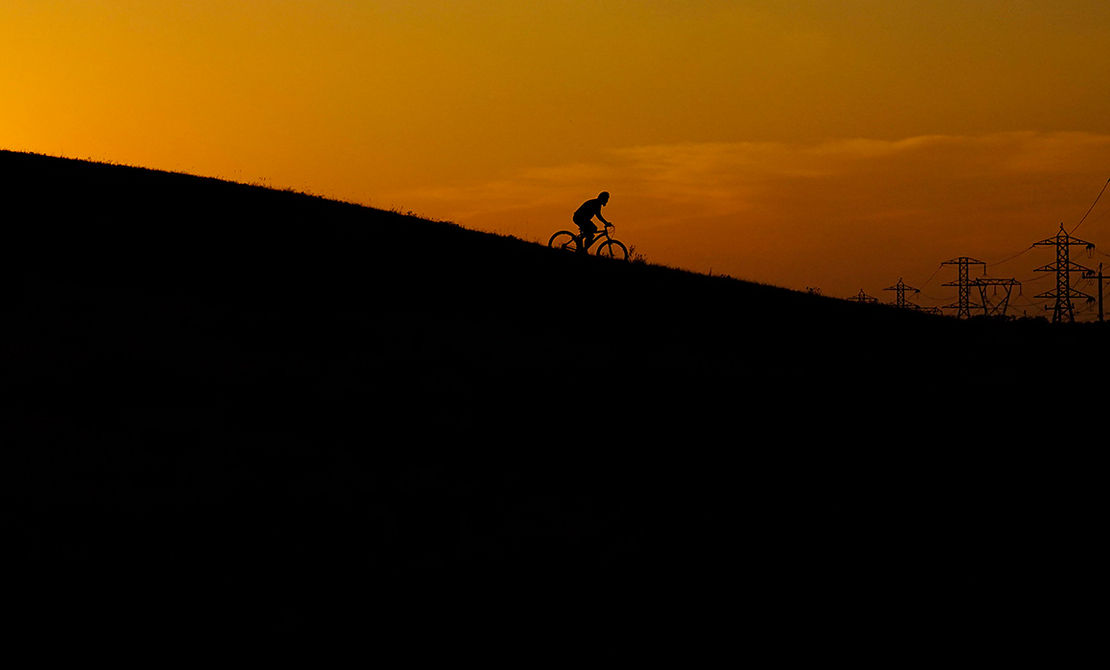 A cyclist riding through a park in San Antonio at sunset this month. AP Photo/Eric Gay

As a heat wave grips large parts of the country and sets heat records coinciding with the start of summer, the U.S. electricity grid has held up.

Even Texas’ electricity system — which has experienced power failures during extreme weather in the past — has seen only scattered localized outages this year despite setting power demand records.

The question is whether that trend can hold if, as forecasters expect, sweltering conditions continue this summer.

A heat dome has brought temperatures near or above 100 degrees to major cities and has shattered heat records across the Midwest, Great Plains and Southeast. That’s boosted demand for power as residents turn on air conditioning at rates earlier than many power providers expected.

The Midcontinent Independent System Operator, which delivers power in 15 states, declared a hot weather alert and capacity advisory this week because of tight generation conditions. PJM Interconnection LLC also issued a hot weather alert for its western region, covering parts of the Midwest but said it was prepared for unexpectedly high demand. Yesterday, the Southwest Power Pool issued a conservative operations advisory for its 14-state balancing authority footprint, a move that does not require customers to conserve energy but does signal tight grid conditions.

The Electric Reliability Council of Texas, the state’s main grid operator, hit its all-time peak demand on Monday and temperatures have crossed triple digits on a number of days. Still, ERCOT has avoided calling for planned outages and continues to say it has sufficient reserves to meet demand.

Experts, however, cautioned that the successful performance in Texas this spring may not last and that customers should be prepared for problems.

“I can’t give a probability, but I would certainly have a plan of what to do if the power goes out,” said Andrew Dessler, director of the Texas Center for Climate Studies at Texas A&M University. “One of my worst-case scenarios is for power to go out during a heat wave. What would people do then?”

In a presentation delivered to the ERCOT board on Tuesday, ERCOT lead meteorologist Chris Coleman reported that 2022 has seen one of the hottest springs ever recorded in the state, including the second-warmest May on record. Some locations, including Austin, saw record high temperatures for the month, with the capital city experiencing 18 days of 95 degrees Fahrenheit or higher.

The climate conditions exist for the 2022 summer to be among the hottest on record, Coleman found. The current La Niña event is extending into its third year and is forecast to stretch into the fall and winter, bringing conditions associated with drought in Texas.

Currently, the meteorologist found, 2022 is trending hotter than the previous record hot summer of 2011, which was about 5 degrees F hotter than average according to a 2012 National Oceanic and Atmospheric Administration study. During that summer, ERCOT imposed rolling blackouts to reduce peak demand.

“I’d be shocked if it’s not a top 10 hottest summer” for the state, Coleman said Tuesday. “But I do think there’s a real chance that we challenge 2011.”

Typically, August is Texas’ hottest month of the year because of warmer water temperatures in the Gulf of Mexico, said Hugh Daigle, an associate professor at the University of Texas, Austin. Daigle said that in records going back to 1938, only nine years have seen warmer temperatures in June than August, indicating that things will likely accelerate later in the summer.

“In terms of electricity demand, there’s a strong correlation between the peak loads you see during high temperatures in June and what you see in August,” Daigle said. “You’d expect higher peak loads in August because it’s even hotter.”

‘Reliability is not enough anymore’

In its summer reliability assessment this year, the North American Electric Reliability Corp. cautioned that extreme weather conditions — especially compounding conditions like extreme heat, wildfires and drought — threatened power outages in parts of the Midwest, Texas and California (Energywire, May 19). A heat wave hitting the country even before the official start of summer has brought stress to the grid early.

Chicago hit 99 F on Tuesday amid the ongoing heat wave, and the intense heat was preceded by a major storm.

Throughout the heat and thunderstorm, Commonwealth Edison — the largest electric utility in northern Illinois — had fewer outages than during similar storms and heat events in previous years, according to Calvin Butler, chief operating officer at Exelon Corp., ComEd’s parent company.

ComEd crews were also able to restore power more quickly than ever before, Butler said in an interview at the Edison Electric Institute’s annual conference this week in Orlando.

Exelon has plans to invest about $29 billion over the next several years across its system to “build a more reliable and resilient system,” Butler said. The company delivers power to more than 10 million customers in Illinois and other states.

“The reliability is not enough anymore. It’s the resilience. And by resilience I mean how quickly do we get customers back on after they’ve been off,” Butler said.

Exelon has taken steps over the years to ensure that outages are addressed promptly, using data analytics to anticipate which areas will be most impacted by a storm and positioning crews to be available near those communities to restore service, Butler said.

Other steps taken by the company include “targeted” burying of electric power lines and other infrastructure in the Washington, D.C., area to enhance resilience, he added.

Texas suffered crushing outages in February 2021, as millions of homes and businesses lost power because there wasn’t enough available generation during a prolonged winter storm. More than 240 deaths in Texas were linked to the storm, and policymakers have worked to bolster the power system ever since.

Grid planners, however, have typically focused on hot weather, making sure there’s sufficient electricity for air conditioners when the weather turns dangerously hot. In its seasonal assessment of resource adequacy released in May, ERCOT forecast a potential summer peak demand of 77,317 megawatts.

ERCOT data has shown that electricity demand could have set an all-time high during the February 2021 winter storm without load-shedding efforts.

Daigle said that according to his calculations based on the association between demand and high temperatures, ERCOT could see peak demand higher than 80,000 MW in August, well above what ERCOT previously forecast.

ERCOT’s summer seasonal assessment also said the grid would have more than 91,000 MW of resource capacity during peak hours, ensuring that there would be enough supply to meet the spiking demand.

And so far, the optimistic forecasts from ERCOT officials have been proven right, with no outages or emergencies during two heat waves. Ahead of a heat wave in mid-May, ERCOT issued a conservation call for its customers, but no such call has been made in June.

A main reason for that, experts said, is growing contributions from solar and wind energy. According to ERCOT data, solar and wind generated more than 27,000 megawatts during the peak demand event on June 12 when demand was about 75,000 MW, nearly 40 percent of necessary supply and enough to power 5.4 million homes at peak demand. Throughout last week, the renewable resources provided around a third of supply on the grid.

Rob Orr, a senior policy advisor at the think tank Texas 2036, said that reflects ERCOT’s deregulated model, which led to more growth in natural gas generation and renewables as prices dropped over the past decade.

“You’ve had these resources come back-to-back-to-back, starting with more efficient gas turbines to wind to solar,” Orr said. “The next big jump is batteries, which we’re starting to work onto the system, but that takes time and access to capital markets. From that perspective, the market has worked by design.”

Reliability has also been maintained because of thermal power plants such as those that run on natural gas, coal and nuclear. During the May heat wave, ERCOT instructed some thermal power plants to delay scheduled maintenance, although six plants totaling 2,900 MW went offline unexpectedly.

‘Very little margin on the grid’

According to a presentation delivered Tuesday by Woody Rickerson, ERCOT’s vice president for system planning and weatherization, resource adequacy for high-demand days is “highly dependent on output of wind and solar resources,” with Rickerson adding that a cloud pattern that moved across the state Monday made a noticeable dent in solar production.

Still, his presentation said, there are no “wide-area reliability concerns expected this year, barring significant outages” from fossil fuel plants.

That’s no guarantee, Dessler said. Wind tends to die down as summer moves on, meaning that renewable power is likely to decline. The variability of solar generation and limited transmission infrastructure could further reduce supply in places where it is needed.

In response to a board question at Tuesday’s meeting, Rickerson said the reliability forecasts do not account for the stress plants might experience by running in hot, high-demand conditions early in the summer because it’s hard to forecast those conditions ahead of time.

In the August heat wave of 2011, between 4,000 and 5,000 MW of generation was unavailable due to power plant outages, Reuters reported, in part because of running in the hot early months of summer.

“Even with the wind and solar, there’s very little margin on the grid,” Dessler said. “If anything goes wrong, like thermal plants going offline on a day where temperatures are even hotter, you’re not going to be able to meet demand.”

The grid’s performance this summer will be in the spotlight, especially after widespread blackouts in February 2021.

Orr said the work done since that storm to focus on resilience and communication after Uri has helped the grid, but that energy providers and municipalities could do more to encourage conservation, especially for large flexible load users like data centers or bitcoin mining operations.

“The more we can do to shave those peaks we see during summer months … it can help the operator as a whole,” Orr said.

For Texas A&M’s Dessler, ERCOT is likely to continue to broadcast optimism, even as conditions grow increasingly stressful for the grid.