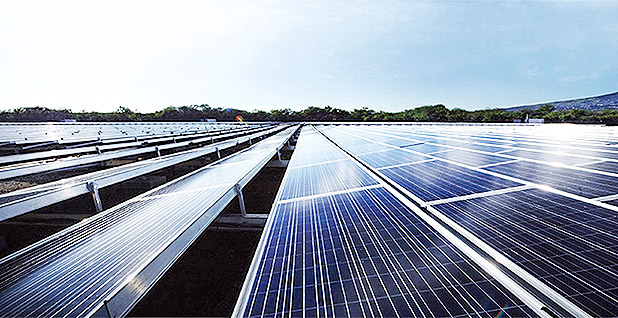 A major Korean supplier of solar modules is threatening to stop shipments to the U.S. if President Trump starts a trade war.

The move shows that the mere prospect of solar trade barriers is starting to strain the American solar industry, even though any action on tariffs is still months away.

Hanwha Corp., one of the world’s largest makers of photovoltaic solar modules, added a clause to its general sales contract last month that gives it the right to cancel shipments if the U.S. raises new trade penalties and also to suspend them while the trade decision hangs in the balance.

It is unclear what effect the change will have on Hanwha’s U.S. customers, including NextEra Energy Resources LLC, a wholesale operator of solar and wind farms that signed a $317 million contract with the supplier earlier this year.

Tariffs are a hot topic in the solar industry right now.

In April, a bankrupt U.S. solar manufacturer called Suniva Inc. asked the Trump administration for trade protection, claiming that foreign manufacturers, especially China, were dumping supplies in the U.S. and killing a domestic industry already on its last legs (Energywire, May 8).

The rest of the American solar industry, however, hates the idea. Solar power’s recent upward trajectory has been made possible by cheap imports, and many say that making those more expensive will slow the growth of solar power and destroy tens of thousands of jobs.

"This document shows the impact this case can have on American businesses and their ability to get the solar panels they need to expand clean, domestically produced solar energy at a competitive price," said Dan Whitten, a spokesman for the solar industry’s main group, the Solar Energy Industries Association.

Sources say that U.S. supplies of solar panels are tight, with everyone trying to grab what they need in case the pipeline is disrupted. However, prices have risen only slightly.

Last month, the main utility in the U.S. territory of Guam picked Hanwha to supply and build a 60-megawatt solar farm.

That deal, however, isn’t complete, according to an email from the general manager of the Guam Power Authority, John Benavente. It "is pending further approval from regulatory bodies," he said. "We will discuss this issue with Hanwha and it applicability to our partnership."

Other major solar suppliers have not followed Hanwa’s lead and have left their contracts unchanged.

Hanwha and NextEra did not reply to requests for comment.

Hanwha, based in Seoul, is a sprawling conglomerate that manufactures missile launchers and owns golf resorts. It entered the solar business early in this decade when it acquired solar manufacturers in China and Germany. Now it is one of the world’s largest solar makers, with plants in China and Malaysia that can produce 5.7 gigawatts of solar cells a year.

The U.S. isn’t one of its largest markets. However, it does millions of dollars in sales here and has a construction-management arm that has built solar farms in Indiana, California and Hawaii.

In a May document filed with the U.S. Securities and Exchange Commission, Hanwha said the trade petition "could harm our ability to sell our products inside the United States, and thereby materially and adversely affect our business prospects, results of operations and financial condition."