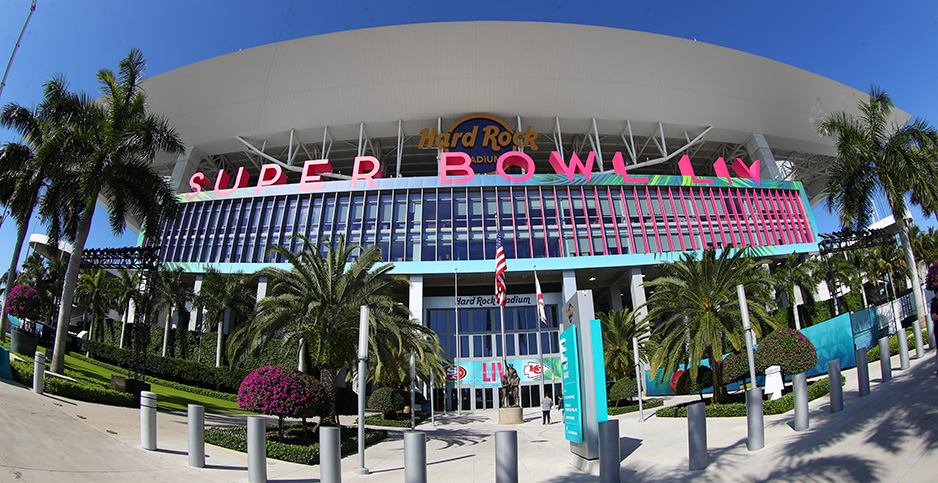 Football fans will be drinking their Bud Light out of aluminum cups this weekend at Florida’s Hard Rock Stadium.

Vendors won’t serve any single-use plastic cups or drink bottles at the Super Bowl in Miami Gardens, Fla., on Sunday. Instead, fans will crack open cans of Aquafina water and drink draft beer from aluminum vessels as the San Francisco 49ers battle the Kansas City Chiefs.

Tom Garfinkel, CEO of Hard Rock Stadium and the Miami Dolphins, announced the change. He’s been on a mission to replace plastic at the stadium with more sustainable materials since he saw a "60 Minutes" documentary about the 80,000-ton mass of floating trash in the Pacific Ocean known as the Great Pacific Garbage Patch (Greenwire, Aug. 14, 2018).

He tweeted in September: "After watching @60minutes I formed an internal committee in [August] to study how to phase out single-use plastic and improve our recycling efforts and am happy to announce that @hardrockstadium is now committed to phase out 99.4% of single-use plastics by 2020 — including for SB LIV."

The switch to aluminum cups alone, Garfinkel said, will eliminate more than half a million plastic ones every year at Dolphins home games. Using the hashtag #100by2022, he called on 99 other venues to make the same pledge to get rid of single-use plastic in the next two years.

But the Super Bowl’s environmental ambitions don’t stop there.

Last April, the Miami Super Bowl Host Committee launched one of its major initiatives: Ocean to Everglades, or O2E.

Hard Rock Stadium’s location, nestled between the Everglades and the Atlantic Ocean between 4 and 6 feet above sea level, inspired the program.

At the current rate of greenhouse gas emissions, the stadium will have a 3% risk of a 6-foot flood in 2050, according to a study by Climate Central, a science organization. The figure rises to 16% by 2100.

"Here in Miami, our environment is everything. Our water supply, our sun, our sand, our beaches, our recreational fishing," O2E Director Jacquie Weisblum said. "There’s such a plethora of issues. With the spotlight of the Super Bowl, we’re able to communicate them."

O2E partnered with the Ocean Conservancy and the Everglades Foundation to raise awareness about environmental issues such as invasive species in South Florida.

O2E co-sponsored the Python Bowl, a state-sanctioned hunting competition designed to cull invasive Burmese pythons in the Everglades. Pythons have disrupted the ecosystem in South Florida as they squabble with alligators at the top of the food chain and devour native bird and mammal species (Greenwire, Jan. 27).

O2E also sponsored a lionfish-catching contest with the South Florida Freedivers club. Lionfish are native to the Indo-Pacific but have increasingly been found along the southeast coast of the United States, where they feed on the young of grouper, snapper and other native species.

"I call on others to do better, to do more," Weisblum said. "When Miami comes back around [for the Super Bowl], I hope we have an even more comprehensive program."