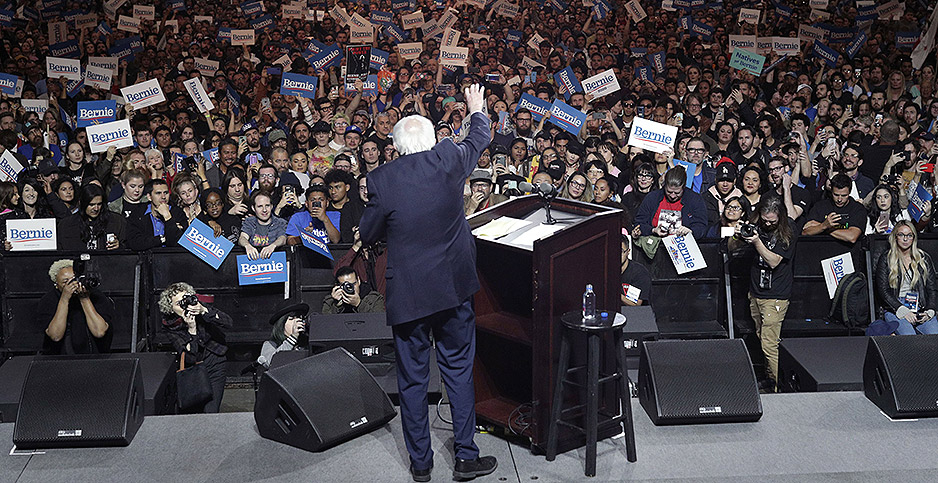 LOS ANGELES — Men leaned out of second-story windows and families crowded into open doorways to watch an unusual event for this largely Latino neighborhood south of downtown: a presidential campaign marching through their streets.

Carrying posters of Sen. Bernie Sanders and Rep. Alexandria Ocasio-Cortez, the congressional architect of the Green New Deal, a few of the chanting supporters would occasionally shout in Spanglish "ven, come with us!" And a few of the spectators did — joining the march to early voting places. Others, like a FedEx driver and people running errands, raised a fist in solidarity.

Such strength in Latino communities has positioned Sanders to win California, the biggest delegate prize of today’s 14 primaries. It powered him to a decisive victory in Nevada. And it’s given the Vermont democratic socialist a bulwark against former Vice President Joe Biden, who won South Carolina with overwhelming support from black voters.

These demographic battle lines have become a noticeable facet of the rapidly changing race. Three candidates have dropped out over three days because they couldn’t break Biden and Sanders’ grip on non-white voters. It’s also casting climate policy in a different light.

Racial justice and electability are the meta-issues that are framing climate, according to interviews with dozens of voters and campaign workers. Polls show that climate tops voters’ interest. But on the ground, that means many people are talking about its connection to other things that affect their daily lives — like housing — or they’re thinking about how it could shape the race against President Trump.

But that changes with the weather.

"As it affects people’s lives here, it rises to the level that it’s a major concern," he said. "When you’re sitting in your home and it’s been 100 degrees for 30 days, there’s a reason for that."

Better advocacy would help people recognize climate change without needing a firsthand reminder, Jones-Sawyer said. But he acknowledged that elected officials have to balance that task with addressing voters’ current problems.

Sanders is best positioned to strike that balance, Jones-Sawyer argued, because his credibility with environmentalists makes him possibly the only politician who could suggest compromise or soften his climate message without alienating young and liberal voters.

Even some voters with personal experience of climate impacts don’t count it as decisive in itself; they’re looking at how it fits into the candidates’ chances of beating Trump.

Tony Slade was working in his north Los Angeles garage one October night when someone banged on the door and alerted him to the wildfire that had ignited about two blocks away.

"I come outside, and it looks like the end of the world," said Slade, who stayed behind to douse his property with water while his family evacuated. The blaze, later named the Saddleridge Fire, spared his neighborhood but would burn nearly 9,000 acres and leave eight people injured and one dead.

Slade said he expects the fires to return, and to get worse. And though he likes Sanders’ promise to aggressively fight climate change, it didn’t sway him. Slade cast his early vote for Biden — the candidate he thinks has the fewest weaknesses against Trump.

Nor was Sanders’ climate pitch enough to win over Sean DeLeon, whose Ventura County home burned down in the Thomas Fire.

He lost nearly everything. The fire left behind only some flowerpots and the twisted metal husk of his workout equipment. Occasional planned power outages at his new home — instituted by utilities on high-risk days to avoid ignitions — remind him that the danger persists.

DeLeon is the kind of infrequent voter the Sanders campaign has targeted. But he’s not hearing anything from the presidential candidates that would change his situation.

"If something seemed like it would affect me, I would be more willing to put in the energy," he said. He opposes Trump, but that’s not enough to motivate him to vote.

The details of the candidates’ climate plans do not seem to have gripped most voters. Instead, many say they’re basing their opinions on other signifiers, like the candidates’ records and endorsements from green groups.

Maria Munguia Wellman and Ray Wellman, who moved to Santa Paula while ash was still falling from the latest wildfire, said they’re voting for Sanders because his progressive politics have been so consistent.

State Sen. Henry Stern, a Calabasas Democrat who had backed former Mayor Pete Buttigieg before he dropped out, said the candidates are too similar on climate for most voters — even those who care most about it — to discern much difference.

Where Sanders has tried to mobilize voters with promises of revolutionary change, the big-dollar campaign of billionaire Michael Bloomberg instead has tried to emphasize his past accomplishments — including his work on climate change.

Bloomberg, who has spent more than $500 million on his Super Tuesday-focused campaign, is drawing a straight line from his mayoral record to his climate plans, said Linda Lopez, his California policy director.

Coming off debate performances where Bloomberg’s record of sexual harassment settlements was a major point, his campaign is playing up the personal nature of his philanthropy.

Confronting fossil fuel companies and the National Rifle Association was a matter of character, Lopez said.

"How many people in this country have actually done that? And if he needs to use his wealth to do it, so be it," she said.

Meanwhile, even the least wealthy in California are tuning into the campaign.

Linda Marie Quezada, a construction worker who recently enrolled in community college, said her job doesn’t pay enough for housing. She lives in a tent with her mother between an Oxnard Superfund site and a gas-fired power plant — pushed there, she says, by police who move them out of more visible areas.

She said she plans to vote, but briefly struggled to recall the name of her candidate.

"What’s his name, the one who says people deserve a second chance?" she asked, before remembering. "Bernie! That dude."