Superfund adviser kept in touch with bank after ban 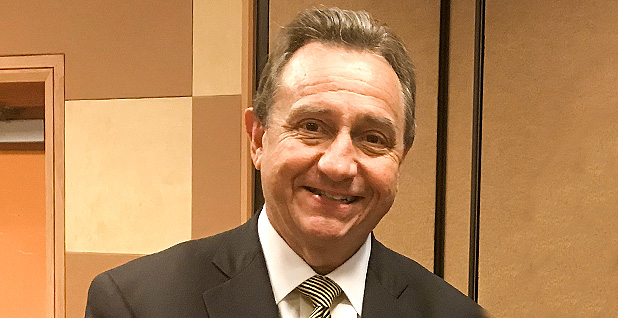 Despite promises to steer clear of his former employer, the disgraced banker who spearheaded EPA’s toxic waste cleanup reform efforts communicated extensively while at the agency with the institution he once led, newly released emails show.

The communications, ethics experts say, should lead to further investigations of Albert "Kell" Kelly, the former chairman of the Tulsa, Okla.-based SpiritBank who joined EPA as a Superfund adviser two years ago after he’d been banned from the banking industry on May 9, 2017 (Greenwire, May 23, 2017).

Issued by the Federal Deposit Insurance Corp., the ban immediately and permanently prohibited Kelly from "participating in any matter in the conduct or the affairs of any financial institution."

Yet while he was overseeing the Superfund program at EPA, the adviser and onetime lender to former EPA Administrator Scott Pruitt continued to correspond with officials at SpiritBank — including his successor as chairman and another top executive.

Such communications may have also run afoul of the Trump administration’s ethics pledge, which Kelly signed on May 26, 2017. By signing that document, he committed to not "participate in any particular matter involving specific parties that is directly and substantially related to my former employer."

"I am told the Feds will publish their final order against me next week," Kelly wrote to Ricker Harper, the bank’s chairman, president and CEO, on Aug. 21, 2017. Although the order took effect in early May, the banking ban and a related $125,000 fine against Kelly weren’t publicly released for months (Greenwire, Aug. 28, 2017).

"If anyone picks it up, I am sure you will be asked," he wrote. "If you wish to discuss any aspect, let me know."

The subject line of the email, obtained by the Sierra Club via open records litigation, was simply "feds."

It’s unclear whether Harper ever took him up on the offer. Asked to comment on the former EPA adviser’s communications with his ex-colleagues, SpiritBank spokeswoman Joyce Madewell said only that the bank "is confident that we are not in violation" of Kelly’s banking ban.

Other officials at the bank, however, continued to correspond with Kelly during his brief stint at EPA. Under scrutiny from congressional Democrats, Kelly resigned from the agency after less than a year in office (Greenwire, May 3, 2018).

"I’m glad to hear from you," Rhonda Renz, whose LinkedIn page says she is an executive vice president at SpiritBank, wrote on July 25, 2017, a couple of months into his tenure at EPA. "I have been curious how things have been going."

Kelly had contacted Renz the previous morning and mentioned that EPA would be releasing its Superfund task force report the following day. The report, requested by Pruitt, offered 42 recommendations to accelerate work on contaminated tracts and get them back to "beneficial use" (E&E News PM, July 25, 2017).

"Take care and let me always know if I can ever be helpful," he added.

After Kelly had been banned from banking and joined EPA, he also exchanged more than a dozen emails with an executive assistant at the bank, who made appointments for him and fulfilled other requests like finding the email address of the president of IBC Bank in Oklahoma City.

The assistant also forwarded to Kelly’s government email account EPA-related travel receipts that were originally sent to a SpiritBank email address he maintained after leaving the bank.

Kelly’s lifetime ban likely stemmed from a bad real estate deal he signed off on in Claremore, Okla. A legal expert told E&E News last year that such a punishment means that, when it comes to banks, "he can’t do much more than open a checking account" (Energywire, Feb. 6, 2018).

The main concern for ethics experts is whether the bank could have benefited from Kelly’s changes to the Superfund program.

"We need to find out if this bank has any properties or loans out that are affected by EPA regulations," said Richard Painter, a professor of corporate law at the University of Minnesota Law School. "Banks can be affected if they’ve loaned money to the wrong people, who’ve got an environmental mess on their hands."

Given its location in the Anadarko Basin, SpiritBank "is going to have some significant involvement and exposure to the oil business," added Painter, who previously served as chief ethics lawyer to President George W. Bush and unsuccessfully ran for the Senate as a Democrat.

Around 2013, SpiritBank loaned money to a church that owns property inside a Superfund site in Bristow, Okla. The church had to move after the contamination was found.

Poisoned by an old oil refinery, the site is located near Kelly’s family land and the Bristow branch of SpiritBank (Energywire, Feb. 28, 2018).

Painter wasn’t sure whether Kelly’s actions could run afoul of his banking ban or ethics pledge. But the former EPA adviser’s use of his SpiritBank email for agency business was "all screwed up," he said. "That just looks terrible."

Asked about Kelly’s ethics pledge compliance, an EPA spokesman said, "We would refer you to Mr. Kelly for comment."

Kelly didn’t respond to a request sent to his SpiritBank email account, and calls to the cellphone he used during his time at EPA produced busy signals.

The agency also noted that SpiritBank "is not listed as a responsible party at any federal Superfund site."

For Painter, though, the biggest mystery is why Kelly was even allowed to serve at EPA in the first place.

"I’ve got more questions for you than answers," he said. "They shouldn’t have hired him to begin with because he had a bad business ethics compliance record in the banking industry."

EPA’s inspector general is currently auditing the Superfund task force that Kelly led, but it’s not specifically examining how or why he was put in charge of that effort (E&E News PM, Sept. 17, 2018).