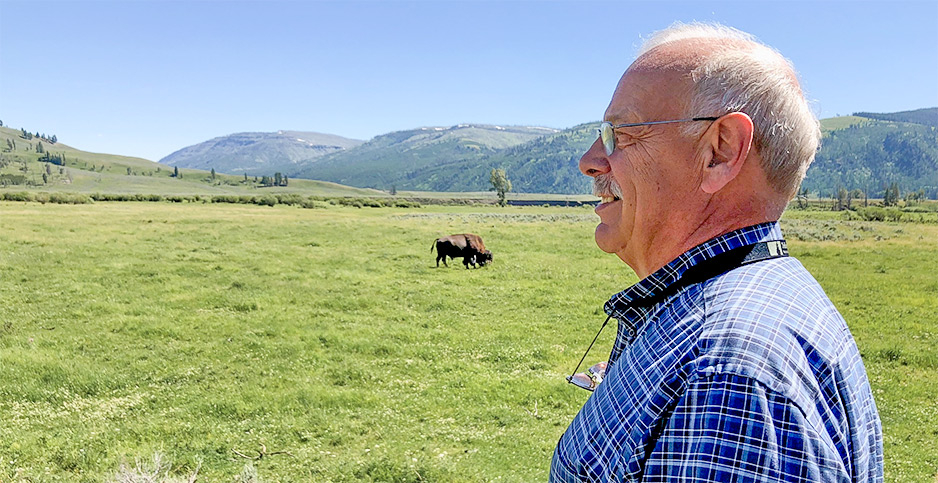 YELLOWSTONE NATIONAL PARK — For Dan Wenk, it has been a summer of reflection, whether it’s climbing to the top of Mount Washburn with his wife or gazing at his favorite vista at the Hellroaring Overlook, the spot where his son proposed to his future wife.

"You just take it in," said Wenk, the superintendent of Yellowstone National Park since 2011.

Wenk, 66, is ready to give it all up and head to South Dakota to retire. But it’s not easy.

The relative quiet at park headquarters at Mammoth Hot Springs belies Wenk’s loud exit, which has been anything but usual. He set off a storm in June when he angrily accused his superiors at the Interior Department of forcing him out, with no good reason.

As colleagues rushed to defend Wenk, his departure drew ire on Capitol Hill and still reverberates back home, where friends and foes wonder what went wrong for one of the longest-serving leaders of the National Park Service.

While his backers regard Wenk as a wildlife champion who pushed hard to protect bison, bears and wolves, his detractors said he wore out his welcome by paying too little attention to the mounting concerns of neighboring ranchers.

People on both sides of the debate agree on one point: Wenk’s clash with Interior Secretary Ryan Zinke over the size of Yellowstone’s bison herd hurt him both in Washington, D.C., and in Montana, Zinke’s home state.

"I think he did a lousy job, caved in to all the environmentalists and what have you," said John Brenden, a farmer and former Republican state senator from Scobey, Mont., who chaired the Senate Fish and Game Committee. "He wasn’t very happy about it, but there’s a whole bunch of us that are happy that he’s going."

Brenden said straying bison have trampled crops, fences and farmland and been anything but neighborly, a testament to Wenk’s poor management.

Wenk’s backers say the ranchers have carried far too much political sway, pressuring Zinke to replace the superintendent with someone less zealous about protecting bison.

"He’s been the best superintendent ever," said Sue Oliver, who lives along the Yellowstone River near the park’s north entrance. "There may be other reasons, but I think this is the main one. He was trying to defend them."

Wenk dismissed the criticism from ranchers, saying that most Montana politicians have "a very significant constituency in the cattle interests" but that he has to take a broader view.

"It’s not ‘Montana State Park,’ it’s a national park," Wenk said. "We’re dealing with a national constituency, and we can’t cater to any one particular use. We have to look at this at a national level with that kind of understanding, and a lot of people in local communities or state governments don’t see it that way."

‘You can’t please everybody’

Wenk said he learned long ago that any decision made regarding Yellowstone is controversial.

"You can’t please everybody," he said. "And can you imagine if things you did in Yellowstone weren’t controversial? It would mean that nobody cares."

Despite the disagreements, Wenk said it’s important for Yellowstone’s top officials to engage with state and local leaders on wildlife management issues because the animals have a way of going anywhere they choose.

"I don’t think I’ve advocated too hard. I think I’ve done my job," Wenk said. "Did I rile some people in the states? I’m sure I did. But wildlife has never respected political boundaries. … We don’t have Yellowstone wolves. We have wolves that primarily call Yellowstone home, but they go in and out of the park."

Wenk said the only official reason he has received to explain his ouster came in a letter from P. Daniel Smith, the acting Park Service director. Smith told him he was being transferred "for the benefit of the service" and that he had a choice to move to Washington to head the National Capital Region or call it quits.

Wenk called it a punitive action, especially since he had already told his superiors that he planned to retire in 2019 and had not kept his plans a secret.

"There was no consultation," Wenk said. "That’s the conversation I was asking for and I never could get."

Zinke has said nothing publicly about why Wenk is leaving. Deputy Interior Secretary David Bernhardt told a handful of House lawmakers in a closed-door meeting last month that Wenk’s proposed reassignment was not politically motivated, just standard practice for senior executives.

In Montana, many are perplexed.

"It might be too late now, but I just wish the Park Service would take another look and see what Dan Wenk has been doing," said Robbie Magnan, manager of the Fort Peck Tribes Game and Fish Department. "He’s been doing great things for the park. Why take him out of there? I don’t understand that."

Jonathan Jarvis, who served as NPS director for eight years under President Obama, said it makes little sense to look for a plausible explanation from the Trump administration.

"If people within this administration were actually operating on some form of logic, then you could come up with a reason, but I don’t think that they need a reason," Jarvis said. "They can say we don’t like the color of your hair."

Jarvis, who assigned Wenk to the Yellowstone job seven years ago, said the manner in which Wenk has been treated "doesn’t really send a good message to those who would aspire to those kinds of jobs." He gave Wenk high marks, citing in particular his opposition to the delisting of the grizzly bear from the endangered species list and his desire to protect the animals from hunters in Idaho, Wyoming and Montana.

"Yellowstone is our Serengeti, and if you’re the superintendent of Yellowstone and you’re not supportive of wildlife, then you shouldn’t be in the job," Jarvis said. "Dan stood his ground. And one of the core values of the Park Service is that if you’re going to go down, go down standing tall."

In October, Wenk will be replaced by Cameron Sholly, the NPS Midwest regional director since 2015. In announcing his appointment, Smith said that Sholly had built "productive and valuable relations" with communities and landowners and that he would shape "the right vision for Yellowstone’s future."

"I served in the Senate with Ryan Zinke, and that’s one of the reasons Wenk is gone. … I think I had a little something to do with it," Brenden said. "I told Wenk I would take the poorest rancher in Montana and put him in as superintendent at Yellowstone Park and he’d be the best manager they ever had."

In a wide-ranging interview in his large office at Mammoth Hot Springs, Wenk said he’s at peace with his planned departure.

"It’s all pretty good, and yes, I have come to terms with it," he said.

Wenk said management of the park’s bison had been "the dominant issue" facing him most recently but only one of many during his tenure.

One of his toughest decisions, he said, came in his first year as superintendent when he decided to not have a grizzly bear euthanized after it killed a couple that was hiking in the park. Wenk said the bear had not demonstrated predatory behavior and was only protecting its young.

Wenk weathered a storm over allegations of sexual harassment among his staff and disciplined a handful of employees for inappropriate conduct.

He said he didn’t like Zinke’s decision to scale down the Bears Ears and Grand Staircase-Escalante national monuments, the largest reversal of federal monument protections in history.

"I think the vast majority of the American public believed those protections were appropriate," Wenk said.

And while many in the Trump administration ignored the dangers of climate change, Wenk said he advised his park’s interpretative rangers not to worry about the opposition in Washington.

"They say, ‘Well, what should we say about climate change?’ And I say tell people the truth," Wenk said. "You don’t have to stand on a soapbox and advocate for climate change, but you also don’t have to deny the facts. The bottom line is, facts are a stubborn thing."

While many lawmakers and Park Service leaders want to drive up visitation, Wenk said he worried as attendance grew by nearly 40 percent since 2010 at Yellowstone and hit a record high of 4.2 million in 2016. He said he believes the nation has hit a crossroads in its protection of wild places and he wonders whether things are headed the wrong way.

"Yes, I’m not going to equivocate," Wenk said. "I don’t know what the answer is yet, but unchecked or unchanged, we have too many visitors. Our facilities can’t handle the number of visitors, and we can’t keep building more roads and more parking sites because we’re about preserving this place. … I worry about people taking this kind of place for granted, and they don’t realize how hard we have to work to protect it. And I don’t know what’s going to reinvigorate that."

Tomorrow Wenk will bid farewell in his final news conference. He has booked two hours for fielding questions from reporters.

Wenk, who still likes to ride his Harley on the winding park roads on these summer weekends, said he has been surprised at all the national attention he has received as his 43-year career with the Park Service comes to a close.

"Yellowstone, whether people have been here or not, is an iconic name and an iconic place. You feel the weight of this place when you’re the superintendent. You really feel a responsibility to protect this place."