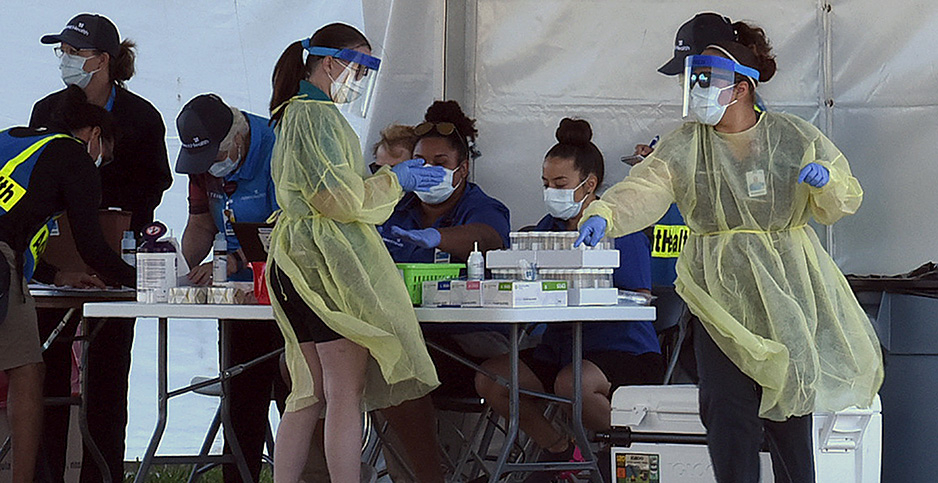 As labs rush to tackle the backlog of coronavirus tests, a special chemical needed to determine whether a person has contracted the virus is running out.

Experts are concerned with the dwindling supply of RNA extraction reagents, causing labs to make tough decisions about which SARS-CoV-2 — the cause of COVID-19 — tests get processed.

That means it can take days or weeks for someone to find out if they have COVID-19, which burns valuable time for federal and local health workers trying to contain outbreaks.

More than 20,000 people have died of COVID-19 in the U.S. and more than 525,000 have tested positive for the virus, according to Centers for Disease Control and Prevention data.

States and U.S. territories with some of the highest reported outbreaks — such as California, Florida and Puerto Rico — have thousands of tests pending. There is no data on how many tests are pending in New York, which has more than 100,000 COVID-19 cases.

Reagents are used to extract RNA from the DNA samples collected in the testing kits, which can indicate if a patient is positive.

"There’s been a huge demand for a very particular kind of reagent, and that demand has not been met," said Pedro Piedra, a professor of virology and microbiology at Baylor College of Medicine.

Reagents are mainly produced outside of the U.S., coming from China and Europe. With shipping delays and dozens of nations looking to ramp up testing, supplies are growing scarce.

"We simply did not have the capacity to rev up for [those] very specialized reagents," Piedra said.

The other challenge is that only reagents approved by the CDC and the U.S. Food and Drug Administration can be used for SARS-CoV-2 tests.

"I hope it’s a wake-up call for the U.S. that we need to make sure that we have some critical manufacturing capacity for critical supply, especially if we’re going to be handling pandemics," Piedra said.

CDC Director Robert Redfield raised concerns about U.S. labs having enough of the chemical in stock, as first reported by Politico.

The CDC did not answer questions about whether the agency has enough reagents to cut down on the backlog of tests.

"CDC is working hard to ensure fair allocation of reagents and is working closely with our commercial manufacturing partners to ensure adequate quantities are available for laboratories as quickly as possible," a spokesperson said in a statement to E&E News.

The shortage of material has led major medical companies like Quest Diagnostics to ask the FDA to temporarily ease restrictions on processing the test kits.

A spokesperson from Quest did not comment on whether or not the company was running low on reagents.

"We have enough reagents to allow us to conduct more than 35K tests per day," the spokesperson said.

Roche, another pharmaceutical and diagnostics company distributing testing kits, did not comment on the amount of reagents it has in stock.

"We are striving to meet the needs of this evolving health situation, we have allocated our resources to best meet our customers’ needs, and our highly committed production teams: we are doing everything humanly possible to produce as many tests, reagents and consumables as we can," Elizabeth Baxter, a company spokeswoman, wrote in an email to E&E News.

Pandemic efforts ‘will be hindered’

Even as companies ramp up production of reagents, it could take months to meet those testing demands.

"If we didn’t have these backlogs and bottlenecks, we could do so much more testing," said Antonia Sepulveda, chair of the Department of Pathology at the George Washington University School of Medicine & Health Sciences.

But backlogs continue, especially in California, where there are 13,200 tests pending, according to the California Department of Public Health.

The backlog has caused lawmakers to plead with the White House’s Coronavirus Task Force for the reagents.

"While the nation continues to struggle with obtaining enough physical testing kits, we now also face a shortage in the chemical reagents needed to process patient samples," Rep. Ted Lieu (D-Calif.) wrote in a letter to Vice President Mike Pence, who is leading the task force.

"Without these reagents, which are required to extract the genetic material," said the congressman, "COVID-19 testing kits will be functionally useless."

California Gov. Gavin Newsom (D) has said that many labs have not been able to process tests because of the shortage.

"If the reagent shortage is not addressed quickly, we will continue to undercount infected patients and our efforts to contain the pandemic will be hindered," Lieu said.