Support for Green New Deal may not save powerful Dem 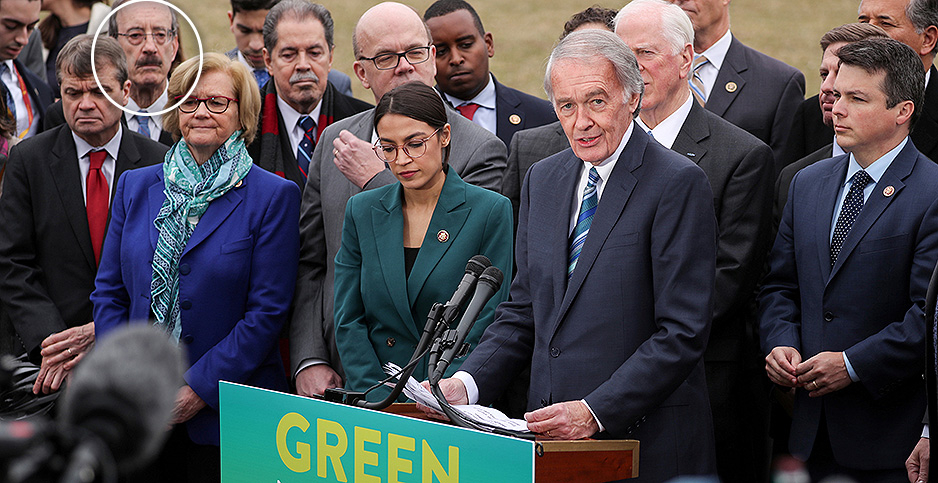 Engel, a 16-term lawmaker from the Bronx who had just become chairman of the Foreign Affairs Committee, joined a few other Democratic heavyweights at the press conference as Ocasio-Cortez touted the resolution’s "broad support across the party."

Sixteen months later, Engel is fighting for his political life as advocates of the Green New Deal — including Ocasio-Cortez — line up behind his main primary challenger, former middle school principal Jamaal Bowman.

Activists are framing the Engel/Bowman contest as a demonstration of their organizing muscle in the pandemic era, along with upcoming Senate primaries in Colorado and Kentucky.

But it also poses an additional challenge. While other races have featured a clear ideological clash between establishment-backed centrists and activist-friendly progressives, the lines are more blurred this time around.

Both Engel and Bowman support the Green New Deal. Engel has also co-sponsored bills establishing "Medicare for All," a major litmus test on the left.

As a result, the race is testing the boundaries of what it means to be a climate hawk — and often in personal terms.

The League of Conservation Voters’ latest scorecard gave Engel a perfect 100%, but his opponents have pointed to some of his positions under the Obama and George W. Bush administrations to suggest Engel’s climate credentials are superficial. His critics have also sought to tie him to polluting industries beyond the oil, gas and coal sectors.

The League of Conservation Voters Action Fund has thus far remained silent on the race, despite issuing endorsements in other New York contests, including one for Ocasio-Cortez.

According to the Center for Responsive Politics, a nonprofit that analyzes the role of money in politics, the energy and natural resources sector has thus far donated $23,200 to Engel’s 2020 campaign. This ranks as one of the smaller sector totals for the congressional veteran.

By comparison, so-called single issue/ideological donations have raised more than $300,000, and donations from the financial sector topped $250,000.

Bowman, for his part, has raised nearly 40% of his donations from single donors in amounts smaller than $200.

Policy points have taken a back seat to more personal questions in the race. Engel, who calls himself a lifelong resident of the Bronx, had already faced criticism in 2009 for listing his Maryland home as his primary address and seeking a tax break granted to Maryland residents.

Earlier this year, as the coronavirus pandemic was sending the United States into lockdown, an Atlantic journalist found Engel at home in Maryland.

Engel initially said he’d been splitting his time between the Capitol and his New York district, but his staff later contradicted him and said he hadn’t returned to New York for more than a month.

Last week, as anger spread nationwide over police violence, Engel attended a protest where a hot mic captured him saying he "wouldn’t care" about speaking at the event if he wasn’t facing a primary.

The growing list of endorsements has progressives dreaming of Bowman delivering a win similar to that of Ocasio-Cortez in 2018 when she toppled then-Rep. Joe Crowley — a member of the Democratic leadership who had long been considered a possible speaker in waiting — in a primary upset.

That’s an expectation even Bowman has acknowledged. "Love my sister @AOC," he tweeted in response to the comparison, "but I’m just gonna try to be Jamaal."

‘Too little too late’

The Department of Defense accounts for most of the U.S. government’s emissions, so the military budget needs to shrink, too, he said, suggesting that Engel has undercut climate policy with his hawkish foreign policy record.

Engel — whose campaign declined to answer questions from E&E News — responded during the debate that he sought to cut off weapons sales to Saudi Arabia.

Bowman has his own cadre of big-name backers, including Ocasio-Cortez, Sen. Bernie Sanders (I-Vt.) and numerous progressive New York leaders. Activists have tried to convert Engel’s support for the Green New Deal into a liability.

Jennifer Scarlott, a coordinator with North Bronx Racial Justice, accused Engel of signing on to the Green New Deal resolution only after five climate organizations announced a February rally outside his office.

"For me, this was too little too late," Scarlott wrote in The Riverdale Press, a weekly newspaper in Engel’s district.

Likewise, the Sunrise Movement has characterized Engel’s support for the Green New Deal as too tepid.

"Engel may have signed onto the resolution, but we need someone who’s willing to make the case for it," Sunrise co-founder Varshini Prakash said in a statement. "When Republicans attacked the Green New Deal last year, Engel was silent," she said.

That dynamic emerged during last week’s debate, when Engel was given the chance to talk about his support for the Green New Deal.

After noting that he co-sponsored the resolution, Engel quickly moved on to talking about House Democrats’ more moderate climate bill, H.R. 9, which would keep the United States in the Paris climate agreement.

"While we’re talking about the environment, I’m chairman of the House Foreign Affairs Committee. The only bill that was passed by the House to do something positive in terms of the environment was H.R. 9, which would force the United States back into the Paris Agreement," he said.

"That’s why I’ve gotten the support of all the environmental groups, because they rate me very, very high, in the high 90s, if not 100, so I’ve been a fighter for the environment all these years," he said.

Indeed, the New York League of Conservation Voters and the Sierra Club endorsed Engel’s reelection, as did House Speaker Nancy Pelosi (D-Calif.), who noted that Engel wields unusual clout as both a committee chairman and a senior member of the Energy and Commerce Committee.

"That wouldn’t happen again. That’s a lot of power," she said last week.