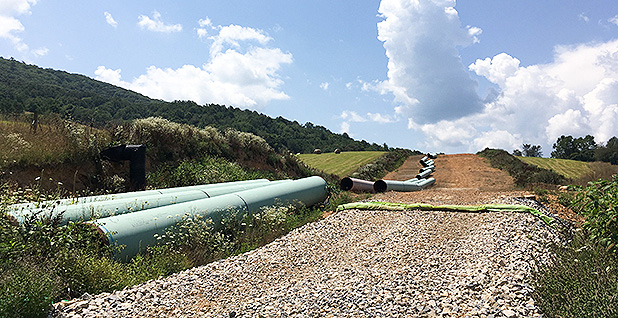 The Supreme Court’s decision to reject a challenge to the Mountain Valley natural gas project could signal the end of the road for disputes over an unusual quirk in pipeline eminent domain procedures — at least for now.

Legal experts see few immediate avenues for landowners to continue to fight the use of "quick take," a process that allows pipeline companies to begin building on private land before paying for access. The issue was central to Givens v. Mountain Valley Pipeline, a landowner lawsuit over the 300-mile pipeline through West Virginia and Virginia that the high court tossed yesterday (Greenwire, Oct. 7).

Those property owners will now go through trials over compensation, but the justices’ rejection leaves little additional recourse on the quick take issue, said attorney Chris Johns, who spearheded the attempt at a Supreme Court review.

Construction on Mountain Valley will continue, "unless there is a permit decision that stops that from proceeding, and that’s still possible," he said.

"It’s an issue that needs to be settled through the Supreme Court," she said. "This has happened all over the country."

Givens has a jury trial in two weeks to seek compensation for her land. She said she’s not sure she can settle with the developer at this point, even though she knows she might receive a lower payout from a jury.

"I think if I cave at this point … it just allows Mountain Valley to say, ‘Oh, look, people are settling,’" she said. "So they are thinking this is OK, or something like that. I don’t want to be the person that is in a row of dominoes that falls down."

A spokeswoman for the Mountain Valley pipeline yesterday applauded the Supreme Court’s move.

"We are pleased with the Court’s decision. Previous rulings on this matter were prudent and well founded on legal precedent," Natalie Cox said in a statement. "We look forward to completing this important project in order to meet public demand for affordable, clean-burning natural gas."

It’s unclear how or if the courts will eventually address landowner concerns about pipeline developers’ ability to immediately seize private property.

"Unfortunately, landowners are going to be stuck having property subject to quick take," said Carolyn Elefant, a landowner attorney who worked with petitioners in the Givens case to spur more state involvement on the issue.

Jeffrey Simmons, a partner at the firm Foley & Lardner LLP who has represented pipeline condemnors in eminent domain cases, agreed.

"Never say never, but it’s my impression most of the obvious challenges have already been made and rejected," he said. "There is now a fairly wide body of case law in the circuit court of appeals rejecting challenges to immediate possession or quick take."

Elefant said one possible way to address the issue would be to get the Federal Energy Regulatory Commission to set more conditions for companies using eminent domain or pause pipeline authorizations until all other permits are secured. Pipeline developers could also be limited to merely surveying private land, rather than gaining immediate access to begin construction.

"In terms of what they can do in court, I think they are out of options," she said.

Simmons acknowledged it is theoretically possible that FERC could make changes to slow down the process a bit.

"But there is a practical problem with that: Most of these are extraordinarily expensive projects, and anything that slows the process ends up costing these companies a lot of money," he said.

Simmons said it would be hard for FERC to slow down a project, especially when there is no question of whether or not the company was allowed to take the land in the first place. Landowners could potentially do more to object to FERC approvals through public comment, but he said many people aren’t really aware of the commission and its role in the process. Construction is often underway by the time property owners make it to court.

Outside of getting FERC to change its procedures, there could also be a push to amend the Natural Gas Act, though that, too, would be a long shot.

"It’s hard for me to imagine what kind of challenge would succeed at this point," Simmons said.

But Johns, the attorney representing landowners in the case against Mountain Valley, sees hope for future lawsuits in the Supreme Court’s decision in the case Knick v. Township of Scott, Pa., last term.

The justices ruled in a 5-4 decision that landowners bringing claims against local governments can bring their cases directly to federal courts, rather than requiring litigation in state court first (Greenwire, June 21).

Johns said the legal theory has been that the 5th Amendment to the Constitution — which prevents the government from taking private property without just compensation — does not require that payment beforehand "as long as there is a secure promise of payment." The court’s ruling in Knick throws the whole quick take process into serious question, he said.

"Knick was sort of reversing Supreme Court precedent," John said. "Now I think there is an opening that this whole immediate possession by injunction is really illegitimate."